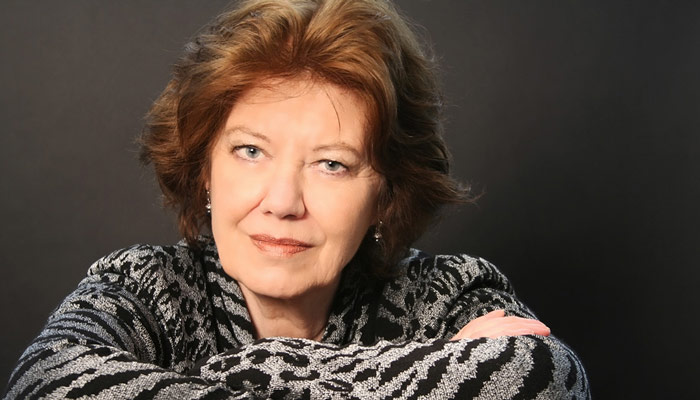 She has written more than 30 popular mysteries set in Victorian London, seven million copies in print. “At first, I gave the missionaries such a hard time, because there were some things I couldn’t accept, but now I can’t remember what they were. I really can’t… I got down on my knees before I went to bed, and I asked my Father in Heaven if it was true or not, and when I woke up in the morning, the room was absolutely filled with light ï¿½ and I don’t mean sunlight.”
Source: Deseret News

Anne Perry has written more than 70 books including the popular mysteries set in Victorian London, with millions of copies in print.

Anne is a convert to the LDS Church. According to a Deseret News article published on August 29, 1999, she said, “At first, I gave the missionaries such a hard time, because there were some things I couldn’t accept, but now I can’t remember what they were. I really can’t. . . I got down on my knees before I went to bed, and I asked my Father in Heaven if it was true or not, and when I woke up in the morning, the room was absolutely filled with light—and I don’t mean sunlight.”

When asked how the Church’s teachings influence her writings, Anne told Famous Mormons in an email, “Actually the basic gospel is all through most of my books—but discreetly. Many have noticed it. It is pure gospel in Tathea and Come Armageddon.”

She shares her story:

I was born in Blackheath, London, England in 1938 and spent the first years of my life there. My schooling was very interrupted, both by frequent moves and ill health. Due partially to this I read a great deal, and had parents who gave me time and attention. My parents also enjoyed reading, and so I had a lot of encouragement. I remember we had a good selection of books to choose from, covering a variety of topics both fiction and non-fiction. In my early years, up until I was about ten years old, I enjoyed books by various authors including Lewis Carroll and Charles Kingsley. I especially remember and have a great fondness for a book called Hereward the Wake.

When I was a teenager (yes, I actually was one!) I went to my father with a particular problem hoping he could help me. However, instead of telling him the problem I stood there humming and hawing and became extremely frustrated as I was just not being able to get across what I wanted to say. At which point I said, “I can’t explain it very well, but I know what I mean.” And he said to me, “No, you don’t know what you mean; if you did you would have the words to explain it.” And he was right. Words, the precise words, are important and they can only come once an idea has been grasped, fully.

My father was very good at getting to the essence of a problem. In his work as an astronomer, mathematician, and nuclear physicist, he was used to dealing with precise details and language. He was therefore able to explain things in a way that was exact and vivid. This lesson has stayed with me and has helped immensely.

Another trait I was taught as a child was trust. During the time when I was recovering from illness and staying with friends in the Bahamas, one of the instructions I received was, if told to do something, then do it immediately and without question. One day I was swimming in the sea and was told quite calmly to get out of the water. I obeyed because I respected the people who were looking after me. When I was on the jetty I discovered the cause of my friends concern—in the sea close to where I had been swimming a shark had appeared.

Although I had various jobs, there was never anything I seriously wished to do except write. It was my father who was responsible for encouraging me to write my ideas down. However, I was in my very early twenties before I started putting together the first semblance of a book. I was living in the county of Northumberland, in a small town called Hexham, not far from Hadrian’s wall, when I started writing the first draft of Come Armageddon. When I did finally begin that book in earnest, just a few years ago, I was able to use the original manuscript for reference. It took twenty years before my first book was accepted for publication, by which time I was in my late thirties. During that time I had various jobs in order to earn an income: clerical, retail selling, fashion, air stewardess, ship and shore stewardess, limousine dispatcher in Beverly Hills, and insurance underwriter.

I began writing mysteries set in Victorian London on a suggestion from my stepfather as to who Jack the Ripper might have been. I found that I was totally absorbed by what happens to people under pressure of investigation, how old relationships and trusts are eroded, and new ones formed. The Cater Street Hangman, the first of my books to be accepted for publication, came out in 1979. I don’t know how many books I wrote before that. I do remember being delighted that I finally had one in print!

A friend asked me why my second novel, Callander Square, is set in 1883, almost a full two years after The Cater Street Hangman. When I first wrote them it caused me no concern as I had no idea that a series would develop. However, I soon realized that I would have to shorten the time gap—otherwise Pitt would soon be a very old man!

I wrote on a book-to-book basis until I changed publishers and was first offered a multiple contract.

I began the “Monk” series in order to explore a different, darker character, and to raise questions about responsibility, particularly that of a person for acts he cannot remember. How much of a person’s identity is bound up in memory? All our reactions and decisions spring from what we know and have experienced. We are in so many ways the sum of all we have been! Used with permission from Anne Perry and www.anneperry.net

With the release of Peter Jackson’s 1994 film Heavenly Creatures Anne’s misadventure earlier in her live became known to the public. She was the same Juliet Hulme, who was convicted as a teenager with her friend in a New Zealand murder case. Most who knew Anne had no idea of her past. When Anne Perry’s dark past was revealed

From The Guardian in 2003 “I was guilty. I did my time” According to the Guardian interview ” She asked a senior figure in the Mormon church if her membership would be affected. “He said ‘your calling comes from God and He knows’,” Perry recalls. “He also told me I would not lose a single friend over it. It didn’t seem possible, but I have learned how decent and compassionate people can be. Not a single friend has gone. That surprised the hell out of me.”