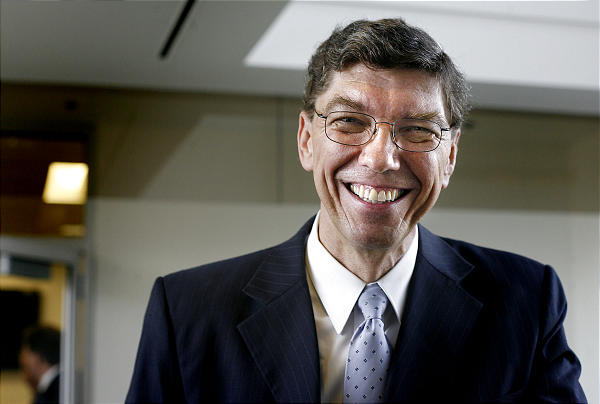 When Clayton M. Christensen visited my mission (New Jersey Cherry Hill) of The Church of Jesus Christ of Latter-day Saints in the summer four years ago, I regarded him as a great teacher, fantastic orator, and nothing less than an inspired man. I was happy to walk away from our mission-wide training that day in the Cherry Hill chapel on the Garden State’s Evesham Road with those sentiments alone. My Mormon missionary companion and I sat at the same table with him and his wife for lunch, and I figured I had this man pretty well figured out.

Turns out, I had much more to learn.

Christensen has recently focused his innovation lens on two of our most perplexing social issues, education and health care. Disrupting Class, which evaluates why schools struggle, was named one of the “10 Best Innovation and Design Books in 2008” by BusinessWeek and, in the same year, the best Human Capital book of the year in the Strategy + Business Best Books. The Innovator’s Prescription (2009) examines how to fix the problems facing healthcare. The work was also awarded the 2010 James A. Hamilton Award by the College of Healthcare Executives. How Will You Measure Your Life? was published in May 2012. In the book Christensen discusses a series of guidelines to find meaning and happiness in life.

In an extension of his involvement in the public sector, Christensen in 2008 founded Innosight Institute, a non-profit think tank. A four-time recipient of the McKinsey Award for the Harvard Business Reviews’ best article, in 2010 he received a Lifetime Achievement Award from the Tribeca Film Festival.

As an advisor to numerous countries and companies—including the government of Singapore—he is currently a board member at India’s Tata Consultancy Services, Franklin Covey, W.R. Hambrecht, and Vanu. Christensen also applies his frameworks through management consultancies Innosight and Rose Park Advisors.

Despite his accomplishments, Christensen hasn’t been exempt from trials. He has suffered from a heart-attack, advanced-stage cancer and a stroke over the course three years and recovered from them all.

Christensen has been profiled for his accomplishments, beliefs and success stories in several media outlets, including Forbes, Reuters, CNN Money and the Huffington Post, among others.

Christensen was born in 1952 in Salt Lake City, Utah. He graduated in 1975 summa cum laude in economics from Brigham Young University. He received a master’s degree in 1977 in applied econometrics and the economics of less-developed countries from Oxford University, where he studied as a Rhodes Scholar.  He received an MBA in 1979 with High Distinction from the Harvard Business School, graduating as a George F. Baker Scholar. He was a White House fellow in 1982-83, serving as an assistant to U.S. Transportation Secretaries Drew Lewis and Elizabeth Dole. He was awarded in 1992 a DBA from the Harvard Business School, receiving the Best Dissertation Award from the Institute of Management Sciences for his doctoral thesis on technology development in the disk drive industry. He is currently the Kim B. Clark Professor of Business Administration at the Harvard Business School.

Professor Christensen is committed to both the community and Church. Aside from his stint as a White House Fellow, he was an elected member of the Belmont Town Council for eight years, and has served the Boy Scouts of America for 25 years as a scoutmaster, cub master, den leader and troop and pack committee chairman. He served as an Area Seventy of the LDS Church beginning in April 2002. Prior to that he served as a counselor in the Massachusetts Boston Mission Presidency and also served as a bishop (head of a local Mormon congregation). Additionally, he proselytized as a missionary for the Church of Jesus Christ from 1971-73 in the Republic of Korea, and speaks fluent Korean. He and his wife Christine live in Belmont, Massachusetts. They are the parents of five children, and have three grandchildren.

His book, The Innovator’s Dilemma: When New Technologies Cause Great Firms to Fail, won the 1997 Global Business Book Award for the best business book published in 1997. His writings have been published in The Wall Street Journal, the Harvard Business Review, Business History Review, Research Policy, Industrial and Corporate Change, Strategic Management Journal, and Production and Operations Management, Management Science, and the European Management Journal.

Rhett Wilkinson attends Utah State University, is a Capitol Hill intern and the co-founder and editor of Aggie BluePrint. He has previously been an intern for the Deseret News. He can be reached at [email protected] or on Twitter: @wilklogan.

The Church of Jesus Christ