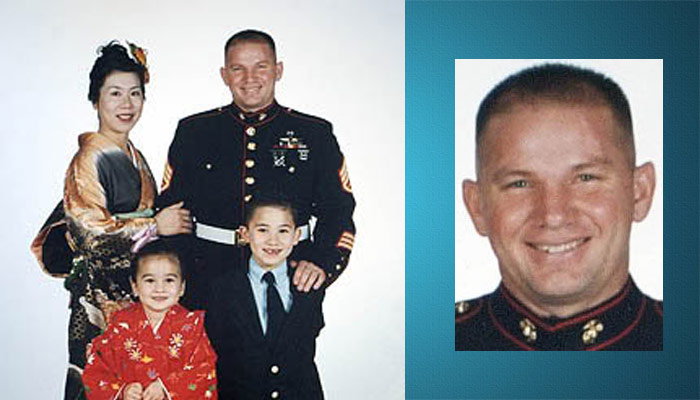 Staff Sergeant James Wilford Cawley, was killed in Iraq on Saturday, March 29, 2003 defending the freedom that he so cherished. Jim was a loyal American and believed strongly in the cause for which he fought. He was serving as Platoon Sergeant of the 1st Platoon, Fox Company, 2nd Battalion, 23rd Marine Division. James also had a strong testimony of the gospel of Jesus Christ. He loved his religion and served an honorable mission for The Church of Jesus Christ of Latter-day Saints to the Fukuoka, Japan mission. He knew that this life was not the end and that we will all be together again in a far greater place.

This section by a friend of James

James Wilford Cawley was a friend of mine. He was my home teaching partner and a SLC police detective. He was on the Swat Team and SLC Gang Unit. He was first in his class at the police academy. If there was ever a role model for the cops’ cop, he was it. He was also a US Marine Staff Sergeant . He was in the reserves when he was called up to active duty and left to Iraq during the first wave of the invasion in 2003. His was the only reserve unit to fight in the initial invasion and his unit was with the very first US forces into Baghdad itself. He was the first Utahan killed in the war and Pres. Hinckley even spoke about him in April conference, 2003, Sunday morning session. But that’s not why he should be considered famous.

Plenty of people go to war & don’t come home. Most of them would be considered kids by our standards; barely out of high school, some of them may have a year or two of college. And as meaning as they are and dedicated to their service of their country, most of them simply did not live long enough to have an impact on the lives of others as much as Jimbo did. He spent several years serving the SLC community as a police officer and if you know any cops, they always step up to the plate, in every situation. They are always “on the job.” I believe that Jim was always “on the job,” and combined with his service in the US Marines, he was the definition of the Few and the Proud. He lived a life of honor and courage. I believe that most cops and many Marines have this quality, but his was unwavering. Now, of course he was not perfect, but whenever I think of James Cawley I always think of one who gave selfless service. I cannot remember him ever not smiling. He was someone that wanted to help people, he wanted to make people laugh, he loved to serve others. He is someone who I will always look to as a great example of a life of service.
He truly did magnify his role in life with extra-ordinary service, outstanding achievement, he never sought fame, always did the work that needed to be done and let others be in the spotlight.
He could have said no to going to Iraq, he needed surgery on one of his knees and the doctor had already waived him, but he volunteered to go to lead the kids that were in his platoon. He was 42 years old, almost twice as old as most of the people in his command and he told a few people that he just couldn’t let them go off without the best leadership possible, and he knew that meant him. During a heavy gunfight two days before he died, he was running back and forth to his men, keeping their spirits high, giving them ammo and basically leading the charge. Two of the other men in his unit, I believe a fellow Sergeant as well as a colonel there both recommended him for the Silver Star for his bravery during combat. He kept a lot of Marines alive that day. Later, after his death, and since the Marine Corp doesn’t give out Silver Stars as often as every other branch, he was awarded the Navy Commendation medal with a combat star. He was a true hero and deserves to be known by all.
All of the Marines in his platoon as well as in his extended company said that they would not have been ready or able to handle the battles they encountered if it had not been for him and that on that day he was recommended for the Silver Star, he should have been shot a dozen times but he kept going into the line of fire and even ran across an open field towards the enemy to help out another Marine platoon that had been pinned down. One that they had been called to come in and get, well he got them out alright.