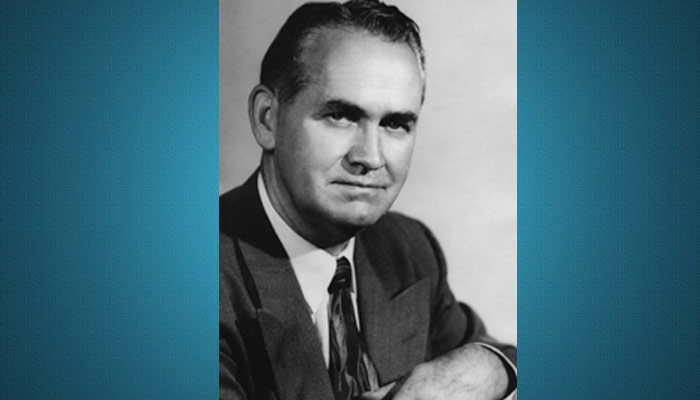 He was one of America’s distinguished sculptors of the 20th Century. In his career he created over 100 public monuments. (Four are found in the U.S. Capitol Bldg. in Washington, D.C.) He studied in New York, Paris, and Italy, and he attained his Doctorate in Anatomy at the University of Michigan where he was also professor of sculpture. He was the founding dean of the College of Fine Arts at the University of Utah (his native state). He was a descendent of Utah Pioneers.

Avard designed the original radiator ornament for the Dodge Motor Company—a ram. He also created a winged mermaid for the Plymouth in 1930 and a griffin for the Hudson automobiles in 1933. Avard did many portraits of notable individuals from around the world. He also sculpted the Angel Moroni, which was placed atop many LDS temples. In Manti, Utah, he placed the Mortal Moroni on the grounds of the temple.

Avard Tennyson Fairbanks was born on March 2, 1897 in Provo, Utah. His father, John B. Fairbanks, was an accomplished artist, having painted many of the murals in Latter-day Saint temples. At the early age of twelve, Avard sculpted a clay rabbit and entered it into a contest at a state fair. The rabbit won first prize, but when the judge learned that a boy had sculpted the rabbit, he refused to award the prize. This experience made Avard all the more determined to become an artist.

Avard followed his father to the Metropolitan Art Museum in New York City. His work was recognized in a New York Herald article entitled “Young Michelangelo of this modern day in knickerbockers working at the Metropolitan Museum.” Avard spent his time modeling animals at the Bronx Zoological Gardens. In 1910 and 1911 he received scholarships to study at the Art Students League. He soon came to know many notable sculptors and received instruction from them. At the age of fourteen, Avard’s sculpture was displayed in the National Academy of Design.

In 1913 Avard went to Paris and studied at the Ecole Nationale des Beaux Artes, the Ecole de la Grande Chaumiere, the Academy Colarossi, and the Ecole Moderne. His works were exhibited at the Grand Salon. The outbreak of World War I led Avard to return home to Salt Lake City, where he continued his high school education.

Avard and his brother J. Leo were commissioned by the Church of Jesus Christ of Latter-day Saints to erect four sculpture friezes for the temple in Hawaii. Avard sent for his sweetheart while in Hawaii, and they were married in Honolulu. They finished their work on the temple in 1918 and returned home.

Avard began studying at the University of Utah. Following World War I, Avard decided to commemorate the return of the soldiers by erecting monuments. He made “The Idaho Doughboy,” which was placed in two cities in the state. In 1920, Avard was given an appointment as assistant professor at the University of Oregon. While in Oregon, Avard created several works, including “The Awakening of Aphrodite” placed in the Washburn Gardens in Eugene, “The Holy Sacrament” placed at St. Mary’s Cathedral in Eugene, World War I memorials placed at Jefferson High School in Portland and at Oregon State University in Corvalis, and bronze monuments marking the Old Oregon Trail placed in Baker and Seaside.

In 1924 Avard took a leave of absence to study at Yale University, which awarded him a Bachelor of Fine Arts degree. Then he returned to Oregon to continue as a professor until he was awarded a fellowship by the Guggenheim Foundation. With this he went to Europe. While in Europe he created “La Primavera,” “Pioneer Mother Memorial,” and “Motherhood.”

In 1928 Avard returned to the United States and taught at the Seattle Institute of Art. He also studied at the University of Washington and received a Masters of Fine Art degree the following year. While there, Avard erected “The Ninetyfirst Division Monument” at Fort Lewis.

In 1929 Avard joined the faculty at the University of Michigan as associate professor of sculpture and resident sculptor in the Institute of Fine Arts. He also studied in the school of medicine and was awarded a Doctor of Philosophy degree in anatomy in 1936.

While in Michigan, Avard created many works of art, including “The Tragedy at Winter Quarters” placed at Pioneer Mormon Cemetery in Florence, Nebraska, “Nebula” exhibited at Northwest Flower Show in Detroit and at the New York World’s Fair, “Rain” also exhibited at the Northwest Flower Show and later selected to be placed at Brookgreen Gardens in South Carolina, “Young Pegasus” placed in Wilson’s Meadowbrook Gardens in Rochester, Michigan, “The Boy with the Shell”, “Dawn and Morning Glories”, “The Flower Girl”, “Sunshine and Moonbeam”, “Aquarius the Water Bearer”, “Madonna and Child”, “Christ among the Doctors”, and “Eternal Progress” which was created for the LDS display in the Hall of Religion at the Chicago World’s Fair in 1933.

He also created “Youth and Frontiers” as a companion piece to “The Tragedy at Winter Quarters” and was exhibited at the Chicago World’s Fair in 1934 and later placed in the Temple Square Museum in Salt Lake City. Avard sculpted many portraits during this time as well. During this time he also worked on the monument “Lincoln the Frontiersman” and the “Emancipator” placed in the courtyard of the Ewa Plantation School in Hawaii. Also, “The Pioneer Family” was placed on the North Dakota State Capitol grounds.

Avard designed the original radiator ornament for the Dodge Motor Company—a ram. He also created a winged mermaid for the Plymouth in 1930 and a griffin for the Hudson automobiles in 1933.

In 1947 Avard was appointed dean of the newly created the College of Fine Arts at the University of Utah. He created three heroic statues to be placed in Statuary Hall in the Capitol Building in Washington, D.C.—Marcus Whitman, pioneer physician of the Pacific Northwest; Esther Morris, women’s right advocate of Wyoming; and John Burke, governor of North Dakota, Supreme Court Justice, and U.S. Treasurer. Avard also sculpted a monument of Daniel C. Jackling, who developed the Utah Copper Company. This was placed in the Utah State Capitol.

Avard also began work on other monuments of Abraham Lincoln. He erected a heroic bronze in New Salem Village, Illinois, another at Lincoln Square in Chicago entitled “The Great Chicago Lincoln” and another called “Lincoln the Friendly Neighbor” in Berwyn, Illinois. At Knox College in Galesburg, Illinois, Avard made bronze panels commemorating the Lincoln-Douglas debates. And finally, Avard placed four busts of Lincoln in the Ford Theater Museum—the youth, the railsplitter, the lawyer, and the president.

Avard did many portraits of notable individuals from around the world. He also sculpted the Angel Moroni, which was placed atop many LDS temples. In Manti, Utah, he placed the Mortal Moroni on the grounds of the temple.

For the Utah Centennial, Dr. Fairbanks constructed a Pony Express which was displayed in the parade. This sculpture depicts a young rider starting on a fresh horse in front of an old man with the worn-out horse. It is one of the few tributes to the men who guarded the stations of the Pony Express, many of whom lost their lives. The Pony Express for the Utah Centennial was a temporary sculpture, made of plaster and displayed in many parades throughout Utah until the piece eventually deteriorated. Avard’s sons have recreated this great work, and it was placed at This is the Place State Park in Salt Lake City. Years later, William Harrah commissioned Avard to create a “single rider” Pony Express, which was placed at Harrah’s in Lake Tahoe and later in Reno. The one in Lake Tahoe remains, but the one in Reno has since been moved.

Avard created many medals of distinction. He also made many bronze reliefs recognizing notable physicians.

In addition to his dedication to his work, Avard devoted time to his family, which consisted of eight sons and two daughters. He taught them modeling and casting. They often helped him in his studio. Avard also did many demonstration lectures for high schools, professional clubs, medical societies, art guilds, church groups, and college faculty meetings.

Avard Fairbanks was the recipient of many awards, including a medal of the Knights of Thermopylae by King Pual of Greece, an honorary degree of doctor of fine arts from Lincoln College, the Lincoln Diploma of Honor from Lincoln Memorial University, the Lincoln Medal of the Sesquicentennial Commission of the Congress of the United States, and the Herbert Adams Memorial Medal for distinguished service to American sculpture.

His memberships included the Architectural League of New York, the International Institute of Arts and Letters, the Society of Oregon Artists, the Circolo Delgi Artisti di Firenzi, the Della Contrada Della Torre da Siena, Italy, and a fellowship of the National Sculpture Society.