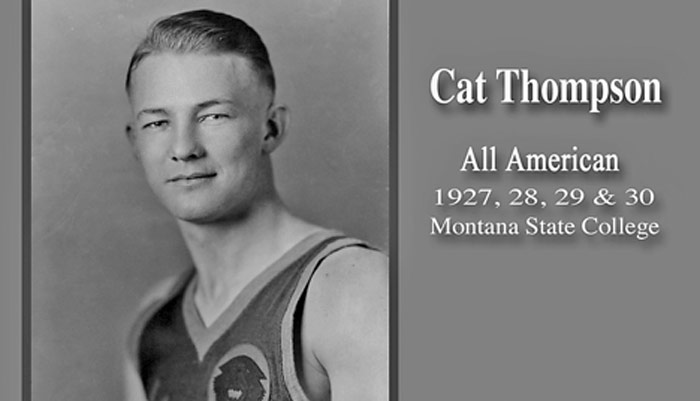 The three-time All-America led Montana State to a Helms Athletic Foundation national championship in 1928-29 and averaged 15.4 points a game at a time when the national team scoring average was 40 points. In 1952, the Helms Athletic Foundation designated Cat an All-American in basketball for four years (1927, 28, 29 and 30) and awarded him player of the year status for 1929. He was an all-American for four years and player of the year in 1929.

In three seasons, “Cat” scored an amazing 1,539 points. He got the name “Cat” from his quickness in stealing the ball from opponents.

After his graduation “Cat” played semi-pro ball in California for a year, then coached high school basketball in Montana and Idaho. He was enshrined in the Helms Athletic Hall of Fame and named “Best Player of the first half century.” He was one of the first players inducted into the Naismith Basketball Hall of Fame.

From an interview to his Son-in-Law:    I spent lots and lots of hours shooting baskets on the  gym floor.  That’s how you get to be good,  you practice a lot. President Grant, when he came down in our country one time spoke of this.  I remember I was only about ten years old, but I remember what he said about whatever you wanted to do.  He said, “What you persist in doing becomes easy for you to do.        Not that the nature of the thing has changed, but your ability to do has increased.”  That was the key that I’d been looking for, up to that part of my life, and I said, “Well, that’s it! You just practice, and practice, and practice and, if you practice enough, why it is easy for you to do.”

Go to this  site catthompsonbasketball.com  it has a series of seven audio clips taken from a 1974 interview.  Episode 6, deals with the importance of practice.  In that interview segment, John outlines how he was influenced by a speech given by President Heber J. Grant