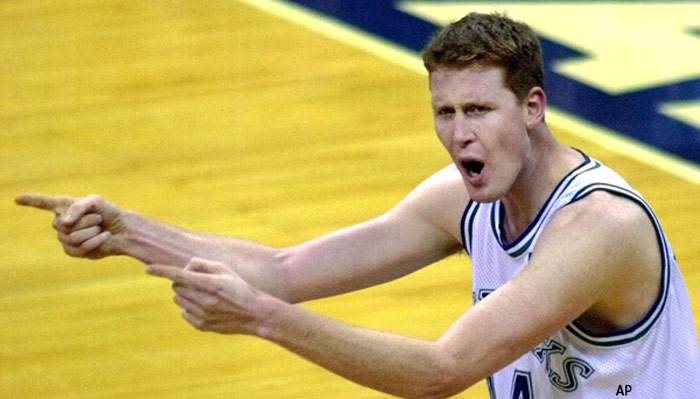 Shawn Bradley is from a small town in Utah called Castle Dale and is a member of The Church of Jesus Christ of Latter-day Saints. He played only one season in college at Brigham Young University before serving a mission in Australia. When he got home, he was drafted second overall by the Philadelphia 76ers in 1993. When he was drafted by the Philadelphia 76ers, he was called a “very clean-cut young man.” He is one of the NBA’s great shot-blockers. Sadly, he has been dunked over many times, and so he is often featured in posters beneath someone who is dunking the ball over him. Part of the reason this happened so often was that Shawn Bradley remained rather slim throughout his basketball career. However, he blocked many shots, but his successful blocks were never posterized. Jeff Van Gundy, Bradley’s old coach, asserted, “Everybody remembers the highlights against him. [We should] put together the highlights of him winning some of those personal battles as well.”

Bradley has played for the Philadelphia 76ers, the New Jersey Nets, and the Dallas Mavericks. Being 7′ 6″, he has never talked to anyone who hasn’t mentioned his height at some point. Fortunately, he says that he enjoys being tall and that he “wouldn’t trade it for anything.” At BYU, he was called “biggest man on campus.”

Bradley has been criticized a lot because basketball was not his “number one thing.” However, Bradley knows that, and he isn’t ashamed of it. He explains, “It never has been, and it never will be. I value my family and my religion as number one.” Bradley feels that his greatest accomplishment throughout his basketball career is that he “stayed married during that time.” Throughout his twelve seasons in the NBA, he had accumulated around seventy million dollars. Two years after he retired as an NBA player, he started working at West Ridge Academy, a residential treatment center dedicated to helping and rehabilitating troubled kids. He’s also volunteered in India to help people in the leper colonies.

Jeff Van Gundy shares, “I’ve been very fortunate to coach a lot of great ‘big men’ … And their personality to me just seemed so much different than Bradley. You’ve gotta really want it. It’s not just wanting to win—it’s wanting to live that lifestyle. You will miss family events, you will miss many holidays, and not everybody has that.” He goes on to say, “Who’s to judge him? You’re judging him on [a] twelve-year period. He should be judged over the course of his life and on what he’s able to bring to this world.”

Below is a video titled “30 for 30 Shorts: Posterized” about Shawn Bradley where most of the above information was found.