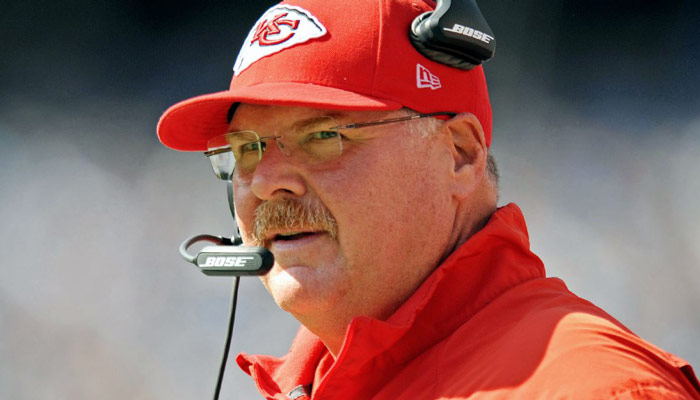 Graduated from BYU with a bachelor’s degree and a master’s.   As a player at BYU, he was also a columnist for the Daily Herald.   “I keep a journal to this day.”   It was at a physical education class at BYU that he met the woman who would become his wife, Tammy.   He converted to the Mormon faith in 1979.   They have been married 21 years and have five children, each of whom was born in a different state as he literally moved up the coaching ladder.   From 1992-1998, he worked as an assistant coach for the Green Bay Packers.   It was in 1999 that he took over as coach of the Philadelphia Eagles and turned a 3-13 ball club into one of the elite teams in the NFL.

Andy Reid’s real name is Andrew Walter Reid, and he is the head coach of the Philadelphia Eagles of the NFL, a post he has held since 1999.  Andy was born on March 19, 1958, in Los Angeles, California.  Andy is a member of The Church of Jesus Christ of Latter-day Saints, often mistakenly called the “Mormon Church.” 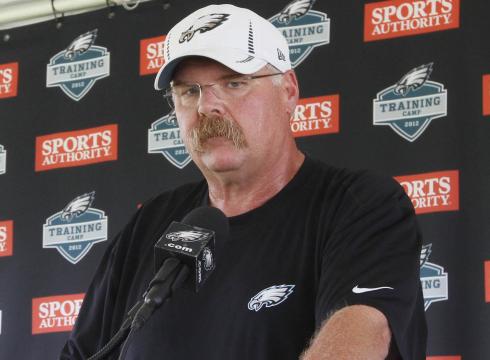 In addition to being the head coach of the Philadelphia Eagles, Andy is the executive VP of football operations.  He’s a famous coach in the NFL, having  led the Eagles to five NFC championship games, including four consecutive appearances from 2001-2004, and to Super Bowl XXXIX in 2004.

Andy has always been athletic.  In 1971 (at age 13) Reid appeared live on Monday Night Football during the Punt, Pass, and Kick competition. Reid played offensive guard and defensive end at Brigham Young University for head coach LaVell Edwards (Wikipedia).   He graduated from BYU in 1981 and spent a year working with the football team as a graduate assistant.  The following year, he was BYU’s mascot and then went on to spend the next nine years as an offensive line coach with four different colleges.  He was hired as an assistant coach by the Green Bay Packers in 1992,  and  was named the Packers’ quarterbacks coach in 1997, the season after the Packers won Super Bowl XXXI.  Reid provided high quality coaching for the Packers, and everyone noticed.  He was hired as the head coach of the Eagles in 1999.

The Eagles were failing with a 3 – 13 record in 1999.   In 2000 the Eagles scored an 11 – 5 season.  Beginning in 2001, Reid’s Eagles won the National Football Conference’s Eastern Division four consecutive times, the longest such streak in franchise history, and advanced to the conference championship game in 2001, 2002, 2003 and 2004.   With some difficult players on his hands, 2005 was a difficult season for Andy and the Eagles, but they rebounded half-way through 2006 with some player substitutions.  The Eagles, at 10-6, won the NFC East division title, as well as an NFC Wild Card game against the New York Giants. Their wild ride ended at the hands of an opportune Saints team in the NFC Divisional Round.

In the 2008 season Reid led the Eagles to a 5th NFC Championship game, where they lost to the Arizona Cardinals 32-25.  In the 2009 season Reid failed to win a first round postseason game for the first time in his career.

During his 13-year tenure, Reid has compiled the best win total (120), winning percentage (.609) and playoff victory total (10) in team history. He has captured six division titles and five trips to the NFC Championship game.  Since he was hired in 1999, no other franchise has earned more divisional playoff round appearances  and only Bill Belichick’s New England Patriots have exceeded Philadelphia’s conference championship game appearances. Since 1999, Reid has also sent 19 players to 44 Pro Bowl appearances, the highest total for any team in the NFL during that period. None of these players had ever appeared in a Pro Bowl before Reid was hired (Wikipedia).

Among coaches with 100 games under their belt, Reid’s .609 winning percentage is 11th in NFL history and second among active coaches behind Bill Belichick (.724).  Reid was named the Earle “Greasy” Neale Award winner for the third time in 2010.  Reid is currently the longest-tenured head coach in the NFL.

The Eagles took some heavy losses, however, during the 2012 season, not long after Andy suffered the death of a son.  People speculated that he might be fired.  Reid made some staff and player changes that caused speculation, too.  2013 is the last year of Andy’s contract.  Speculation saw him coaching for the Dallas Cowboys, a rival team.

Reid was, indeed, fired by the Eagles and immediately picked up by the Kansas City Chiefs.  Reid’s deal  came hours after the Chiefs announced they had parted with general manager Scott Pioli after four tumultuous seasons.

Reid would be inheriting a team that was 2-14 and matched the worst finish in franchise history, but that also had five players voted to the Pro Bowl.  It’s expected that Reid would pursue longtime Packers personnel man John Dorsey, one of his close confidants, to work with him as general manager. [1]

Kansas City was excited to get the likes of Reid, as demonstrated in an article featured on ”Pitch” online, January 9, 2013, called “Print your Andy Reid Commemorative Mustache.” [2]

The Eagles had fired Reid after a crappy 4-12 season, which followed 2011’s 8-8 campaign. Such blemishes were rare in Reid’s 14-year Philly tenure; Reid ended with just three losing seasons, compiling a 130-93-1 overall record.

The (Chiefs) franchise’s future looks bright with Reid in charge and the No. 1 overall pick in the NFL Draft. Celebrate by printing off this commemorative Andy Reid walrus mustache and a collection of facts about our new football overlord after the jump.

He is a Mormon: Reid played college football at Brigham Young University in the late 1970s. He donated to fellow Mormon Mitt Romney’s presidential campaign. He should have plenty of places to worship in the metro.

Reid’s mustache is awesome.  The article has a mustache to print, cut out and wear &mdash; a must for loyal fans with high hopes for the Chiefs’ future success on the field. 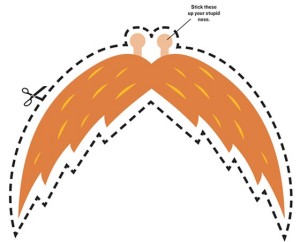