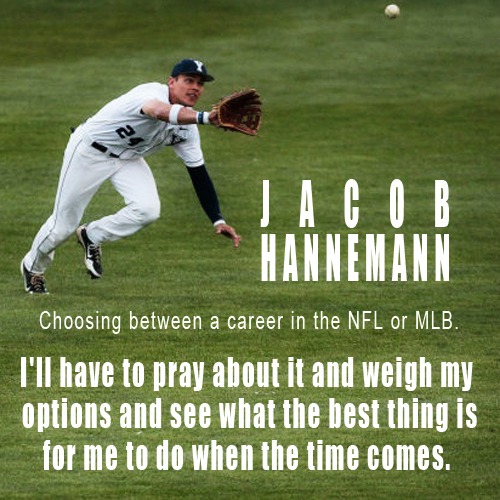 Being a dual sport player on the collegiate level is probably something most college freshman wouldn’t hope to achieve regardless of their athletic talents. But, for a 22-year-old native Hawaiian, Lone Peak High School graduate, and Brigham Young University (BYU) freshman named Jacob Hannemann, it seems like the most natural thing to do.

From a very young age, Jacob has always had a keen interest in sports. He was born in Kahuku, Hawaii, and when he and his family lived there, he enjoyed riding the waves on his surf board. As a sportsman at BYU he has gained considerable recognition as an all-around athlete. He plays the position of outfielder for the Cougar’s baseball team, and defensive back for the Cougar’s football team.

Jacob is the son of Howard and Mindy Hannemann. His younger sibling, Micah, also plays football for the Cougars, and his brother Kyle signed a 2011 football letter of intent to play for Southern Utah University. He is a member of The Church of Jesus Christ of Latter-day Saints (inadvertently referred to as the Mormon Church by the media and others), and served a two year full-time mission in the Arkansas Little Rock Mission. He is also an Eagle Scout.

Before his glory days as a dual-athlete at BYU, Jacob had already gained considerable acknowledgement as an outstanding athlete when he was a student at Lone Peak High School in Highland, Utah.

In baseball he maintained a batting average (the measure of a batter’s performance obtained by dividing the total of base hits by the number of times at bat, not including walks) of .450. In 2009 as a member of the Lone Peak Knights football team, he helped to lead the school to an overall record of 9-3. During his high school football days he had a total of 33 tackles with four interceptions. He had five or more tackles in four games. He also had 19 receptions for 380 yards and seven touchdowns, and rushed three times for 20 yards on offense. And he recorded a season-high 137 yards with two touchdowns against American Fork. [1] It is no small wonder that he was voted as the team’s MVP.

Jacob graduated from Lone Peak High School in 2010. By the time he had graduated he had already signed a letter of intent to play football for BYU and he was also preparing to serve a two-year mission for The Church of Jesus Christ. At the same time, the Kansa City Royals had also taken a keen interest in his athletic abilities and were interested in having him play for their team.

“The Kansas City Royals have been talking to me all summer,” Hannemann said. “I actually flew out there during the beginning of the summer with my dad to do a little workout with them. We did a practice in their stadium out there in Kansas City, Missouri, and man it was great! It was a great experience and we got to watch a couple games. Man, it was fun.” [2]

After just three days of working out with the Royals, Jacob became a draft prospect, but having just graduated high school, he was uncertain as to which direction his future should go and wanted to keep his options open.

“I did really good and they wanted to draft me in the 12th round but pay me fifth-round money,” said Hannemann. “I told them that I wanted to keep my options open, and so they knew that I was 50-50 in whether I was going to choose to play with them or not. They didn’t want to waste a draft pick knowing I wasn’t sure what I wanted to do, so they were going to just draft me in the 12th round with fifth round money. [2]

The offer placed on the table by the Royals was $250,000 which included a $125.000 cash sign-on bonus, and a four-year scholarship to the college of his choice. Although that was a considerable amount of money for just starting a baseball career, Jacob still had some major life decisions to make. One of those decisions was whether to pursue a baseball career or serve a two-year mission for The Church of Jesus Christ.

“It was really hard,” Hannemann said. “I know that I could still have a chance to play in the future if everything works out. It’s a great opportunity. But what I’m saying is I feel I need to go serve a mission first before any of those opportunities come around. It was tough because I felt like I was being pulled in both directions, so I really wanted an answer from Heavenly Father on what I should do. There was a time when I thought that the opportunity for me to play for Kansas City was a blessing for me and that’s what I should do. I was thinking that maybe He was giving me this opportunity and this is what I was supposed to do.

“I was planning on serving a mission but the [Royals] didn’t want me to go on my mission,” Hannemann continued. “They were trying to get me to not go out and wanted me to start right away. I was looking at this opportunity and thinking this was a great chance for me to play sports at the highest level. At the same time I also knew that serving a mission was the right thing to do, so I struggled with what lay before me and needed to find out was best for me. I think maybe that playing baseball is something I can do in my future, but just not right now. “[2]

Making His Decision a Matter of Prayer

Jacob knew in his heart what he should do, but at the same time he felt a lot of stress and pressure in making a decision. He felt that having a chance to play for the Kansas City Royals was a blessing from Heavenly Father, but at the same time he felt that if he was faithful and served his mission first, Heavenly Father would bless him with even greater opportunities. He decided to make it a matter of prayer, and after receiving his answer, he called the Royals to inform them that he had decided to serve a mission first, and to not consider him for the draft. “After that I felt peaceful and happy and relaxed. It was a change of night and day in how I felt.” [2]

However, the conversation between Jacob and the Kansas City Royals did not end there.

“The Kansas City Royals called me back and said they were still going to draft me, but in the 48th round,” said Hannemann. “They still ended up drafting me even though I told them I was leaving to serve my mission in Little Rock, Arkansas. They told me that I could start right up with them when I come back. I don’t know if it’s just a five-day contract type of thing to see if I can still play after serving for two years or what, but when I come back I really want to go to play football at BYU first. That’s what I told them and that’s what I’m going to do when I come back off my mission.” [2]

The Royals even made “a bizarre option [for Hannemann] to be assigned to the franchise’s low-level team in Arkansas where he could proselytize during the day and play ball at night. The family explained to the organization that wasn’t really an option.” [4] The Royals finally ended the conversation by stating that they respected Jacob as a person and his decision, but admittedly, they did not understand why serving a two-year mission for The Church of Jesus Christ was more important than playing professional baseball. They may not have understood, but Jacob and his family understood completely.

The Windows of Opportunity Open after Serving His Mission

While serving his mission in Little Rock, Arkansas, Jacob shared with people how he had been drafted to play major league baseball straight out of high school, but had decided that serving a mission first was top priority.

“I wanted to go out and serve, but I missed sports a lot,” he said. “The dream to be a professional baseball player was still there, but it was fuzzy. Now it’s clear, like in HD. I never imagined it would come around so quickly.” [3]

“I hope it works out for the best this year,” Hannemann said. “I’ve prayed on it. I dreamed about it. Whatever happens, I’ll try to hit the ground running.” [3]

On Friday, 7 June 2013, Jacob Hannemann was selected by the Chicago Cubs in the third round of the Major League Baseball (MLB) draft. He was picked 75th overall, the second pick of the third round, which is higher than had been predicted. And so it appears that his days as a two-sport all-around athlete have come to an end.

As Jacob prepares to begin a new chapter in his life by playing professional baseball for the Cubs, he leaves behind both a promising football career and baseball career with BYU. This past baseball season he was honored as the West Coast Conference Freshman of the Year. He leaves the BYU Cougar’s baseball field with an impressive record of a batting average of .344 with five home runs and 29 runs batted in (RBI). He was also “named the 2013 WCC Freshman of the Year and earned 2013 Louisville Slugger Freshmen All-American honors in his first college season.” [4]

We’re stoked,” said Howard Hannemann, an Alpine resident and father of the 22-year-old Lone Peak graduate. “We never dreamed he would go this high.” [4]

Learn More about What Mormons Believe