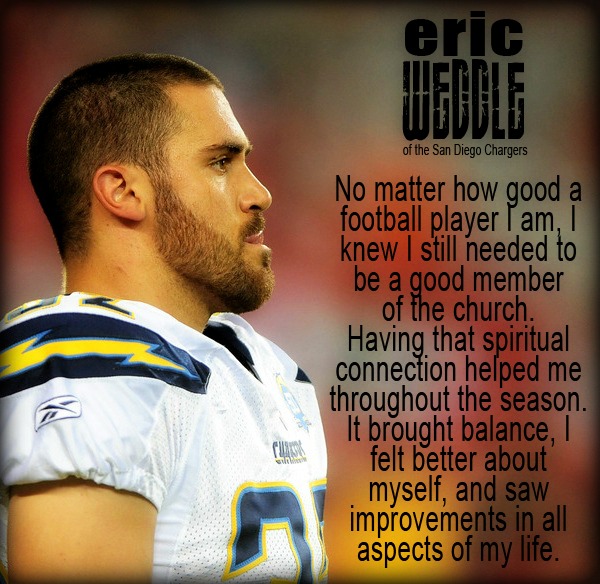 Eric Weddle wears many hats—husband, father, NFL safety for the San Diego Chargers, University of Utah alum and Mormon. He is also the subject of a book about his life titled “No Excuses, No Regrets: The Eric Weddle Story,” by Trent Toone. (This article is based on an excerpt from the book.) As a member of The Church of Jesus Christ of Latter-day Saints—sometimes inadvertently 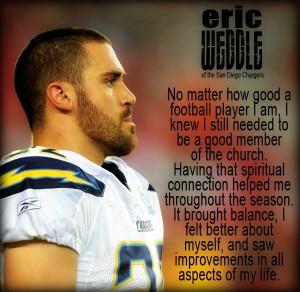 called the Mormon Church—Eric is striving to find the balance between his NFL career, which requires him to work most Sundays six months out of the year, and his Sunday worship. [1

Eric—who joined The Church of Jesus Christ as a sophomore at the University of Utah in Salt Lake City, Utah—said that finding the balance wasn’t always easy. His first two seasons in the NFL, he decided he needed extra sleep on Sunday mornings and didn’t make it to church on game days, except when the games were at night. He said it was easy to justify the decision, but he started to see that he wasn’t the same person spiritually. He also realized he wasn’t living up to the spiritual commitments he made to himself when he joined The Church of Jesus Christ. He knew he needed to sacrifice sleep to gain the spiritual nourishment he was lacking. Although his game-day schedule didn’t allow for him to attend the 3-hour block of Sunday meetings of The Church of Jesus Christ, he could attend the hour-long sacrament meeting. Sacrament meeting is the principal worship service where members partake of the ordinance of the sacrament, sing sacred hymns and listen to uplifting messages from speakers. So Eric’s third season, he attended sacrament meetings when the Chargers played at home. [1]

When I didn’t go to church during my first two years in the NFL, I didn’t know how it would impact me as a person. It was hard to go six or seven months without church,” Eric said. “Going into my third year, I felt like I could do more. Football is important, but my family and faith are also important, and no matter how good a football player I am, I knew I still needed to be a good member of the Church. Having that spiritual connection helped me throughout the season. It brought balance, I felt better about myself, and saw improvements in all aspects of my life. [1]

Rivals on the Field, Fellow Latter-day Saints at Church

Making time for spiritual sustenance on Sunday mornings while he was home made such an impact that, going into his fourth season, Eric decided to attend Sunday worship services when the Chargers played away from San Diego too. When he was on the road with the team, Eric would find the nearest Latter-day Saint congregation that met at 9 a.m. and then call a cab to pick him up. Due to time constraints, Eric would show up in street clothes rather than the customary shirt and tie. He would also leave early. He always received warm welcomes, but few people ever recognized him. Sometimes fans of the local team would recognize his name after they shook hands and introduced themselves, but for the most part he was fairly anonymous. [1]

In October 2010, the Chargers were in Oakland to play the Raiders. Eric went to a Latter-day Saint congregation that met at 9 a.m. near the Oakland-Alameda County Coliseum. It was Fast Sunday, which is usually the first Sunday of the month, and Eric realized he hadn’t born his testimony for awhile. In The Church of Jesus Christ, Fast Sunday is the day members abstain from food and drink for 24 hours and then donate the money that would have been spent on those meals to the Church. This is called a fast offering, and the Church uses that money to help care for the poor and the needy. During sacrament meeting, members of the congregation are invited to share their testimony, or their feelings about the Savior, Jesus Christ. Eric, wearing a polo shirt and jeans, walked up to the pulpit and shared his testimony in a chapel filled with complete strangers. “He didn’t introduce himself or talk about football, but he expressed gratitude for the blessing of the gospel in his life. His remarks lasted less than five minutes. When Eric was finished, he returned to his seat.” No one seemed to recognize him, and he left before the service was over to return to the stadium. “It’s unclear how many Raider fans were at church that day, but it was certainly a unique moment in the history of the Chargers-Raiders AFC West rivalry.” [1] How often does an NFL safety bare his soul to strangers who are probably fans of the rival team?

Of this experience, Eric said, “I was glad I bore my testimony. It’s a blessing to know that the church and the gospel are the same no matter where I go. I can find a church and know the services and feel at home there.” [1]

Making Church attendance a priority has helped Eric bring a balance to his life—one that is easy to lose during the six-month NFL season that demands constant focus on football. Eric said of going to Church during the season:

It has been hard to do, but I make a point, regardless of where I am, to do it. I have noticed a difference in myself spiritually. I have had a better relationship with my wife and kids. It’s because I am putting the gospel first. I just wish it hadn’t taken me so long to realize it. [1]