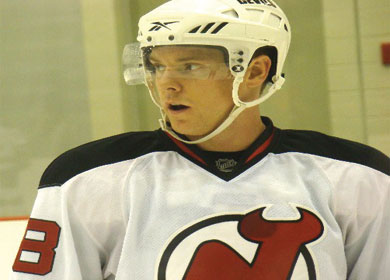 A December 2012 article in the Deseret News tells how hockey star Brad Mills gave up alcohol and followed in the footsteps of his father by converting to The Church of Jesus Christ of Latter-day Saints, often called the “Mormon Church.”  Mills found that when he would spend an evening drinking, he was much more prone to injury when he played the next day.  Getting sober was the pragmatic choice.  The center/wingman was struggling in his role as a “depth” player for the Lowell Devils, an American Hockey League affiliate for the New Jersey Devils, due to his late-night partying.  Sobriety enabled Mills to move up to the NHL.

Mills’ father joined the LDS Church in 1980, a year before Brad was born.  Craig Mills was taking an accounting class at the University of Alberta when he met Bruce Hudson, a fellow student who had served a Mormon mission in Italy.  Although Hudson was enthusiastic about the gospel of Jesus Christ, Mills was reticent and never did meet with missionaries.  He did, however, accept a copy of the Book of Mormon as a gift from Hudson.  Some months after graduation and a move to a new town, Mormon missionaries tracted Mills’ neighborhood.  It was the presentation of the Plan of Salvation that impressed Mills.  He dug up the old book and read it in four days.

Craig Mills had a powerful experience with the Holy Ghost and was ready to be baptized, but his wife held back.  Eventually afraid to betray his witness, he made the difficult decision to be baptized without her.  The family moved to Olds, Alberta, a city north of Calgary, where Brad grew up as the third of five children in a home where his father was a Mormon and his mother was a Catholic.  Craig Mills worked long hours and still managed to fulfill callings in his chosen church, in which there is no paid clergy.  His wife ever resisted Mormonism and took the kids to Catholic services.

By his teens, Brad wondered why his parents attended two different churches, but especially because he was athletic and Canadian, his true center was ice hockey.

He grew up skating and swinging a hockey stick before leaving home at age 17 to play for a team in Northern Alberta. From there he was recruited to play at Yale University. Four years after that he signed with the New Jersey Devils organization.

But it didn’t bring him the happiness he had expected. Despite his success on the ice, Mills describes the decade of his life spanning 2000 to 2010 as a dark time.

“During that time, spirituality was an afterthought,” he said, “something I took for granted.”

It wasn’t until 2010 that Brad began to attend Alcoholics Anonymous to rid himself of his drinking problem.  His life immediately changed.  While he suddenly became a star player, getting sober also awakened Brad’s spiritual side.  Remembering the example of his father, Brad decided to seriously investigate the Church of Jesus Christ.  He located a young single adult ward in Lowell, Mass., and showed up one Sunday morning in late March.  The second he set foot in the LDS meetinghouse, a wave of spirit washed over him.  He found himself SMS-ing his father with questions.  Both were “texting” in sacrament meeting.  Brad started taking the missionary lessons at the end of the hockey season and finished them in the presence of his father back home in Alberta.  Brad was baptized by his father on May 28, 2010, in Alberta.

“I think my dad had been active in the church, praying and fasting for more than 25 years for this,” Brad Mills said of his father. “My whole life he has been a tremendous example.”

So far this season, Mills has scored 11 goals and recorded 10 assists while helping the Utah Grizzlies to a 9-10 record in the ECHL standings. In the process, the 6-foot, 195-pound forward has earned the respect of his coaches and teammates.  Brad’s coaches call him a professional on and off the ice, true to his faith and its precepts, a man living according to a code of honor.

“Tempers flare in a physical game like hockey, but my approach has changed a little bit,” he said. “I realized … my purpose in life is not to be a pugilist. I will stand up for myself and my teammates but I’m not out there looking for a fight like I used to be.”

In fact, Brad attends every church meeting he can, in addition to Sunday meetings.  He is sanctifying himself to qualify for Mormon temple worship.

“When I look back, it’s like your entire life the Lord is reaching out to you, guiding and steering you, and it’s a matter of how well can you follow directions,” Mills said. “I look back over my life and it’s been little moments and big moments and they all seem to be fitting together and steering me to where I am now.”