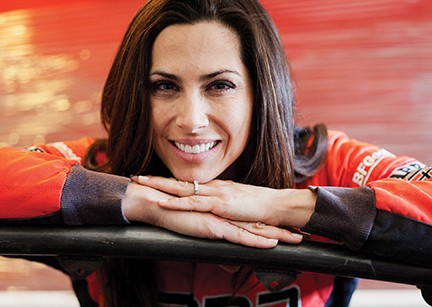 Nicole Johnson would spend her weekends and summers with her dad bent under the hood of a car in Hawaii. This began an early passion for cars and motivated her to become a monster truck driver.

“Now, jumping huge is really hard to describe. There’s no sensation like it. I’m driving a 12-foot Scooby-Doo truck, and I’m flying through the air. I feel like a superhero in a cartoon,” Johnson told Vice.

She’s more than just a driver, though. Johnson is also a wife and a mom. Johnson and her husband, Frank, decided from the beginning that “our approach was going to be wholesome and family oriented. We were always going to be on time, and our clothes and vehicles would be clean whenever we showed up to [a competition]. I wanted to set a good example as a member of the Church,” Johson told BYU Magazine.

Johnson learned about the Church from a friend in California. Being the only member of her family, she packed her bags and left for Provo, Utah, where she attended Brigham Young University and married a returned missionary at age 19. Johnson’s husband helped fuel her desires for the hobby, taking her camping and four wheeling, eventually getting into rock-crawling competitions—something that landed them on History Channel’s Modern Marvels and drew the attention of media outlets around the world.
Johnson is the first woman to win her debut race in monster truck history. In 2011, she won nine titles—more than any rookie or woman has ever won in a single year—and in 2013 she became the first woman to land a backflip in Monster Jam and win the Crash Madness of the Year award.