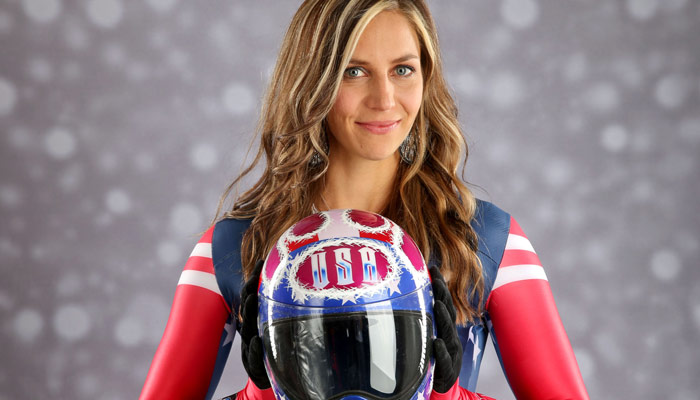 She just missed the podium in the 2010 Winter Games after finishing just one-tenth of a second out of the medal race. She travels to all her international competitions with “Team Pikus-Pace” that includes her husband, Janson Pace, and their children, Lacee Lynne and Traycen.

Noelle Pikus-Pace of Eagle Mountain, Utah County, was one-tenth of a second short of a medal, taking fourth in women’s skeleton in 2010

Eagle Mountain, Utah   2010 U.S. skeleton team   Pikus-Pace is the youngest of eight children and a native of Orem. She grew up running track and playing softball at Mountain View High School. She began competing in skeleton in 2001 through a developmental program at the Utah Olympic Park.

A former softball player and track athlete, Pikus-Pace is at peace with the painful parts of sports. She credits her family, her friends and her faith as a member of The Church of Jesus Christ of Latter-day Saints with her ability to embrace whatever comes her way.   “My faith had everything to do with my recovery, with coming back to compete,” said Pikus-Pace. “The prayers of everybody else around me, my family, friends. … I really believe it helped me to recover so quickly. “Doctors were in awe, they still are as to how quickly I recovered. I was walking within three weeks of having a compound fracture to my lower right leg, which is unheard of. I was competing on the World Cup circuit in six weeks, sprinting with my sled and everything. I really believe it came down to the prayers of my family and also just having faith that if it were supposed to work out then it would. Mormon Times