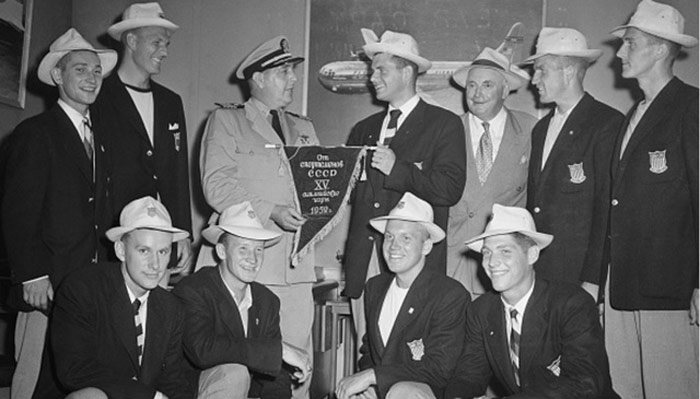 Robert Detweiler was born 20 July 1930 in Centralia, Illinois he died 8 December 2003 in Orem, Utah. competition rower and Olympic champion, naval officer, and scientist of solid state physics. He won a gold medal in the 1952 Summer Olympics, as a member of the American team. After the Olympics Bob became a member of The Church.

Bob Detweiler attended the Naval Academy and was in the fifth seat on their eight-oared crew which won the 1952 Olympic gold medal. Detweiler graduated from the Academy in 1953 but while there rowed on the boats that won the 1952 and 1953 IRA Regatta and the Eastern Sprints. He was a longtime career Naval officer, specializing as a scientist in solid state physics. After retirement, he worked as director of research for energy and communications at Eyring Research Institute in Provo, Utah, and taught math, history, and English at the Alpine Life and Learning Center in Orem, Utah. A lifelong devotee of music and the arts, he was chairman of the Utah County Arts Council, was a founding member of the Utah Piano Quartet, and performed in numerous plays and musicals and sang with the Salt Lake Opera Company. source http://www.sports-reference.com