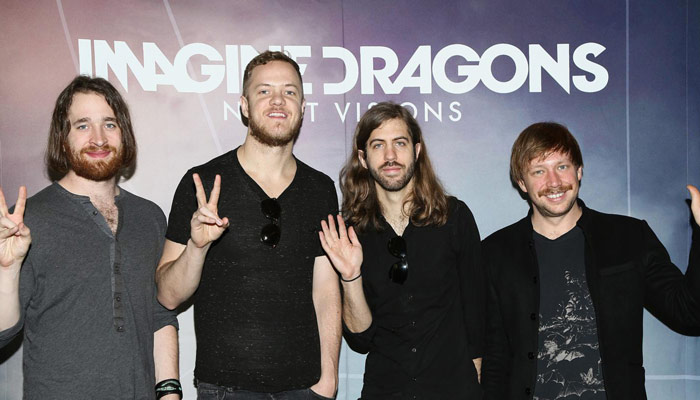 Alternative rock band, Imagine Dragons, was started by Mormons. However, the members of the band changed over the years. Currently, two of the four members of Imagine Dragons are Mormons: lead singer Dan Reynolds and lead guitarist Wayne Sermon. The band was formed in 2008 and got its start when the band won BYU’s 2008 “Battle of the Bands” competition in Provo, Utah. The members of the band, shown from left to right in the photo, are Daniel Platzmann (drummer), Dan Reynolds (lead vocalist), D. Wayne “Wing” Sermon (lead guitarist), and Ben Mckee (bassist). They started to become famous in 2012 after releasing their first album, Night Visions, which contained viral songs “It’s Time” and “Radioactive.” According to Wikipedia, they were named “Breakthrough Band of 2013” by the Billboard. They have won a Grammy Award for Best Rock Performance as well as five Billboard Music Awards and a World Music Award.

The band first began to form when Dan Reynolds and Andrew Tolman (a drummer) met while they were students at Brigham Young University (BYU), a Mormon college in Provo, Utah. The two of them recruited other members of the band to play guitar, bass, and piano. The recruits were Andrew Beck, Dave Lemke, and Aurora Florence. A year or so later, Beck, Florence, and Lemke had all left the group, causing Reynolds to recruit guitarist Wayne Sermon, a friend of his from high school who had graduated from the Berklee College of Music, and bassist Ben McKee, also a Berklee student. After the band had gained many fans in Provo, they decided to relocate to Las Vegas to increase their fan base. Tolman and his wife Brittany (who had been recruited to play the piano and do backup vocals) left the group in 2011. Daniel Platzmann joined the band shortly after. The band signed a label deal in November of 2011. Soon, the band became world famous with its album Night Visions.

Dan Reynolds (lead singer) was raised a Mormon (LDS) and served an LDS mission for two years in Nebraska where he taught people about the gospel of Jesus Christ and helped drug addicts. He married singer Aja Volkman (also a Mormon) on March 5, 2011. The couple has three daughters (Wikipedia).

Daniel Wayne “Wing” Sermon (lead guitarist) was born in American Fork, Utah and grew up as a member of the Mormon (LDS) Church. He married ballerina Alexandra Hall, a BYU graduate, in 2011. They have two sons (Wikipedia).

Wikipedia says of Imagine Dragons, “Despite its quick rise to international stardom, Imagine Dragons maintains a band culture of humility, relatability, and creativity. Lead singer Dan Reynolds once noted that Imagine Dragons is an ‘atypical band,’ in that its image diverges from that of the stereotypical rock group. Three of the four members are not tattooed, and the group chooses not to attend afterparties … At one point, when the band did choose to attend an afterparty, they noted to each other than ‘we don’t belong here,’ as they arrived by foot amongst limos and luxury cars. They often bring computers on the road to play League of Legends and connect with fans through their Twitch.tv channel.”

These characteristics hint at the influence that Mormonism has on this band. Mormons believe that their lives will be ultimately better and happier if they avoid harmful influences like alcohol and drugs because they are addictive and can ultimately take over your life in a negative way.

Lead singer Dan Reynolds told the Billboard in 2015, “We’re an atypical ban. We’re not tatted-up, trying to make a statement. The spirit of rock’n’roll is not that you’re living on the edge, that you’re a cokehead—those are just lifestyle choices.

After being asked Darryl Smyers of the Dallas Observer, “Are LDS and rock and roll music contradictory ideas?” Wayne Sermon responded, “For a lot of people, it might have been more difficult, but for us, it has been easy to do both. Everyone in the band is open-minded. For us, it hasn’t been an issue. I think you surround yourself with the things you want to be surrounded with. For us, it’s always about the music. That’s always been primary for us. Some things have been challenging, but I think, for the most part, things have been basically easy.”

Below is the official music video by Imagine Dragons for “On Top of the World.” This video was filmed in Provo, Utah and included other famous Mormons: Jon Heder (actor who played Napoleon Dynamite), Studio C (creators of hilarious YouTube videos including the Scott Sterling Soccer Shootout), and Dan Reynold’s wife, Aja (who plays the wife of Dan’s character in the video).