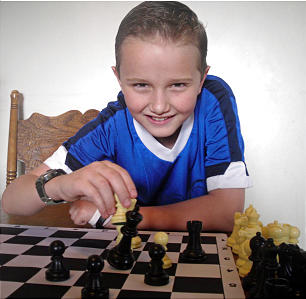 When Kayden Troff was a toddler, he sat in his father’s lap watching his father teach his older brothers to play chess. At age three, he announced he was now ready to play. Amused, his father agreed to play him a game. To everyone’s surprise, he knew exactly how each piece moved and how the game was played. By kindergarten, he was aggravating all the older children in the local chess club because he was beating them—even the junior high school students.

At age fourteen, Kayden was the best chess player in the United States for his age, and was also considered the fastest player. Each morning before beginning his home-school work, he runs with his father and then practices chess for two hours. When he finishes his school work, he practices for three or four more hours, including online games with other top teen players. Despite this, during a family discussion on the need to sacrifice for things that are important to you, he admitted that chess does not require sacrifice on his part. For Kayden Troff, chess is just fun. He enjoys the challenge and also enjoys the opportunity to travel to other countries for tournaments.

Kayden is a member of The Church of Jesus Christ of Latter-day Saints, whose members are often called Mormons. His website (kaydentroff.blogspot.com) discusses his faith, includes links to Mormon.org (an official website designed to help people learn about Mormonism) and his brother’s Mormon mission. His brother, Vanhim Troff, is spending two years as a missionary in Helsinki, Finland.

Kayden says Mormon chess champions are rare and so people tend to pay attention to his faith. He gets many opportunities to discuss his faith with others because they are often curious.

Kayden has received periodic coaching from chess masters since he was very young, one of whom told his parents to keep it fun, which they have. To Kayden, chess is exciting because every game is different. His goal is to make the US Olympiad chess team. He is currently part of Young Stars—Team USA, which gives Kayden and about eleven other young chess players the opportunity to train with chess champions, including  World Chess Champion Garry Kasparov.

Each summer, Kayden and his family, all avid chess players, run a chess camp for Utah children. The children have a unique opportunity to receive coaching from a chess champion who is not an adult and they consider him to be a great coach who is friendly, patient, and funny. He feels this gives him an opportunity to give back.

By mid-2013 Kayden had added many awards and accolades.  In the fall of 2012, he won the  U14 World Championship in Maribor, Slovenia.  [1]  The Gold Medal  was presented by former World Champion Garry Kasparov.  Kayden was also invited to the 2013 US Championship at age 14 to compete against the best 24 players in the country.  Kayden was seeded #23, and he finished tied for 6th place!  It was an amazing finish especially for his age. [2] [3]  He was interviewed constantly and featured on Fox Sports Midwest.   Kayden was recently featured in a Chess Music video in an article in Chessbase in Germany.  Chessbase has over 100,000 views per day.   In the video the TLC Trio, all the actors and actresses, and the BYU Ballroom dancers are all members of The Church of Jesus Christ.