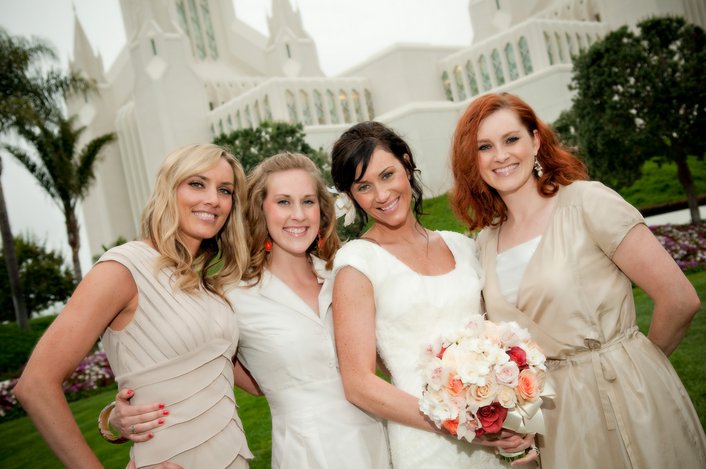 As active church members, Kristyn, Kelsi, and Kassidy grew up in Magna, Utah, as three of six children of David and Robyn Osborn.  Their debut album The Whole Shebang was certified Gold on 01 Nov 1999 and certified Platinum on 28 Mar 2000. SHeDAISY’s third album on Lyric Street Records, Sweet Right Here, has been certified Gold (sales over 500,000) by the RIAA.

SHeDAISY ( /ʃəˈdeɪzi/) is a name derived from the word shideezhí, a Navajo term meaning “my little sister” and is the famous Mormon female group of American country music singers. They are composed of three sisters in the Osborn family, namely Kristyn Robyn Osborn (born August 24, 1970), Kelsi Marie Osborn (b. November 21, 1974), and Kassidy Lorraine Osborn (b. October 30, 1976).

They began their careers as just The Osborn Sisters. But in1999, the sisters renamed the group SHeDAISY. They signed to Lyric Street Records and their first album, The Whole SHeBANG, was issued that year and was certified platinum in the United States. Aside from their first successful album, they also released a Christmas album entitled Brand New Year, which was released in 2000. In the following year they worked on to their third album Knock on the Sky, which was issued in 2002. Sweet Right Here is their gold-certified album, which was released in 2004. Two years later, their album entitled Fortuneteller’s Melody was released in 2006, and The Best of SHeDAISY (a compilation) in 2008. Here is the list of their hits from their albums:

• 2006 – 2007: Fortuneteller’s Melody
“I’m Taking the Wheel”
“In Terms of Love”
“God Bless the American Housewife” ‘Counterfeit Heart’
“Something to Talk About”
‘Stranded’.

The Osborn family, members of The Church of Jesus Christ of Latter-day Saints, are well known for their extraordinary gifts in singing. All of the siblings can sing very well, which is truly a gift from God. The Osborn sisters began singing at early ages, performing for relatives in their hometown, Magna, Utah. They are very cooperative with each other and are very self-reliant, so sometimes they sold tickets to neighborhood shows. All three sisters moved to Nashville, Tennessee, where they worked similar shifts at different department stores for five years. They sometimes played at night clubs.

Of the three sisters, Kristyn is the group’s songwriter in which she wrote or co-wrote every song on SHeDAISY’s studio albums apart from “God Bless The American Housewife.” Jason Deere, a Mormon songwriter in Nashville and a native of Oklahoma, worked with SHeDAISY early in their career. Deere produced the band while it was signed to Lyric Street. Kristyn attended classes at a local university to learn about the music business.

There are several notable awards and nominations given to SHeDAISY including: