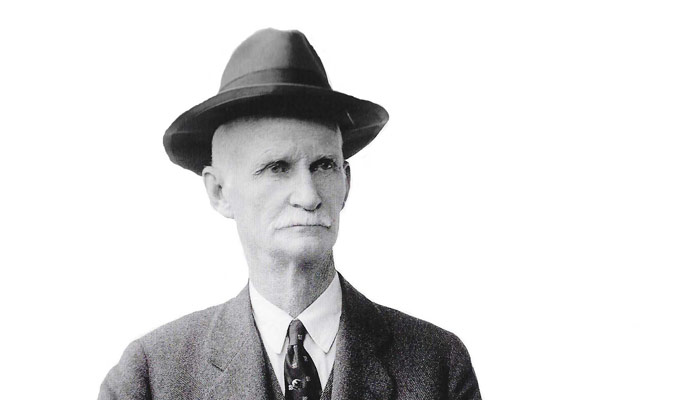 The most famous firearms designer the world has ever known with the greatest firearms inventory in history. With 128 firearm patents, John M. Browning’s inventions have marked every armed conflict from World War I through Desert Storm.

John Moses Browning was the most accomplished firearms designer the world has ever known. With 128 firearm patents, John M. Browning’s inventions have marked every armed conflict beginning with World War I.

John was born on January 23, 1855 in Ogden, Utah. John’s father, Jonathan Browning, was a Mormon settler, one of the members of the Church that moved from Nauvoo, Illinois, to Utah. Jonathan Browning set up a gunsmith shop in Ogden in 1852, and this is where John got his interest in weapons.

John produced his first gun from scrap metal when he was thirteen.
John is best known for the weapons that he designed. He worked in his father’s gun shop until his father passed away in 1879, the same year he married Rachel Teresa Child.
At the age of 23, John Moses lodged his first patent for the “J.M. Browning Single Shot Rifle.” This invention consisted of a simplification of the percussion mechanism, making it more durable and reliable.

Over the years, Browning granted licenses to several manufacturers for dozens of inventions and firearms developed by him. It’s no exaggeration to say that he invented everything in the field of firearms. It should be noted that the vast majority of his technological innovations have not been able to be bettered or replaced since the beginning of the 20th century, a clear demonstration of the level of perfection achieved.

But his worldwide acclaim is without doubt due to the 9mm Hi-Power semi-automatic pistol, of which over 10 million have been made and which, since 1907, has been adopted by the majority of the world’s police forces and armies. Browning has indeed become the generic name for this type of gun.

None of Browning’s success is due to chance—like all of the American pioneers, he turned luck to his advantage only through an enormous amount of hard work. His strength of character and the steadfastness of his principles were out of the ordinary. Thus it was that, toward the end of his life, when offered an honorary title by a university, he refused it for the simple reason that “he had made it a rule never to accept anything that he had not gained as a result of his own work.”

John Moses Browning was always an active member of the LDS Church, including serving a mission to Georgia beginning march 28th 1887. John was baptized into the Church 18 September 1867. He died November 25th 1926 Liège, Belgium

The Making of John Moses Browning