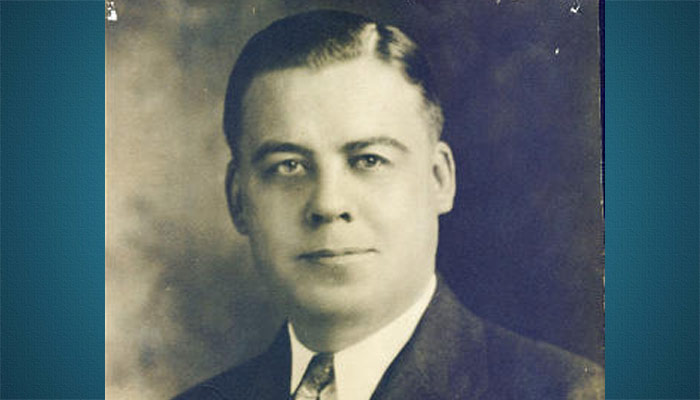 Shot and killed by Baby Face Nelson at the Battle of Barrington in Chicago, Illinois. Nelson died the next from wounds received in this gun battle. Roy Jensen played Samuel Cowley in the horribly inaccurate film: Dilenger (1973).

FBI inspector Samuel Parkinson Cowley, the son of LDS apostle Matthias Cowley and one of his four wives Luella Parkinson Cowley. He was well-known among the ranks of the FBI. Because of his stature and ability, J. Edgar Hoover selected Samuel as the man to lead the assault on America’s gangsters.

Samuel was born in July of 1899 in Franklin, Idaho. When Sam Cowley was 17 years old, he served a four-year mission in Hawaii for The Church of Jesus Christ of Latter-day Saints. Sam is the half-brother of Mormons Apostle Matthew Cowley.

By 1926, he had received degrees from the Utah Agricultural College in Logan, Utah, and the Law School of George Washington University in Washington, D.C. He entered the FBI as a Special Agent in 1929. In five years, Agent Cowley moved from special agent posted in six bureaus around the country to director of investigations at headquarters in D.C. Sam became one of FBI Director J. Edgar Hoover most trusted aides.

By the early 1930s, with crime in the United States becoming increasingly more random and ruthless, the public demanded tough action against the gangsters who were terrorizing the country. In 1934, Congress responded by granting expanded powers to a federal agency that would soon be dubbed the FBI. Sam headed up the anti-gangster effort and participated in several important raids that helped curtail crime. He was considered one of the FBI’s rising stars.

Samuel always made it a point to take Sunday off to attend church, and those who worked with Sam respected him for it.

In July 1934, the director of the FBI gave Sam a special command to capture John Dillinger, a gangster who had been terrifying the Chicago area. After viewing Clark Gable in Manhattan Melodrama at the Biograph Theater in Chicago The notorious gangster came out of the theater, eleven FBI agents attempted to arrest him, but the mobster drew a 38-caliber pistol. The agents opened fire, killing Dillinger.

The body was taken to the Cook County morgue where the shooting was investigated. Jack Lait, noted criminologist, interviewed the agents. Each agent was sure that he was the one who had shot Dillinger, but their guns didn’t match the bullet.

Although he was officially in charge Sam did not like attention. He felt his weapon was there to do a job, not to show off. As his gun was finally examined it was determined that Samuel was the man who killed Dillinger.

On November 27, 1934, Cowley received word that Nelson had been seen driving a stolen car. Two Special Agents spotted the vehicle near Barrington, Illinois. Nelson brought his car around behind the Agents, and Nelsons friend John Paul Chase fired five rounds from an automatic rifle into the Agents’ car. One of the Agents returned fire and one shot pierced the radiator of Nelson’s car, partially disabling it.

Inspector Cowley and Special Agent Herman Edward Hollis approached in another automobile and began pursuing Nelson and Chase. The agents forced the car from the road to arrest him, and the gangster opened fire. Sam was armed with a submachine gun. A gun battle started, and in the end both Samuel and the other agent were mortally wounded Sam was shot twice in the midsection and died the next day. The gangster was killed by bullets from Sam’s gun. He hit Nelson with at least six rounds.

The funeral services for Samuel were held in the Assembly Hall on Temple Square. Speakers at the funeral included apostles George Albert Smith and John Widstoe, as well as a senator and the governor of Utah. Assistant Director Harold Nathan eulogized Sam saying, “As generations of new agents come into our service, they will be told of the life and death of Sam Cowley. He will become a tradition. He will have attained earthly immortality.”