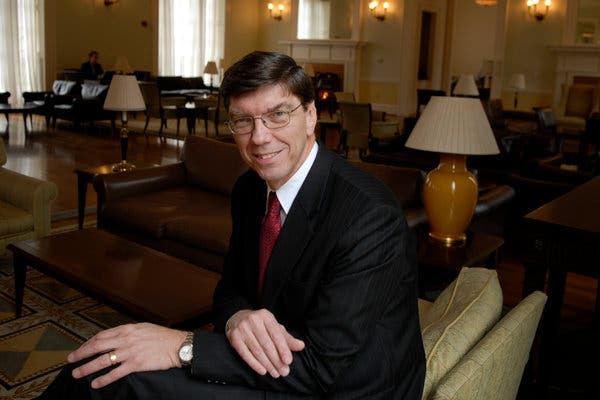 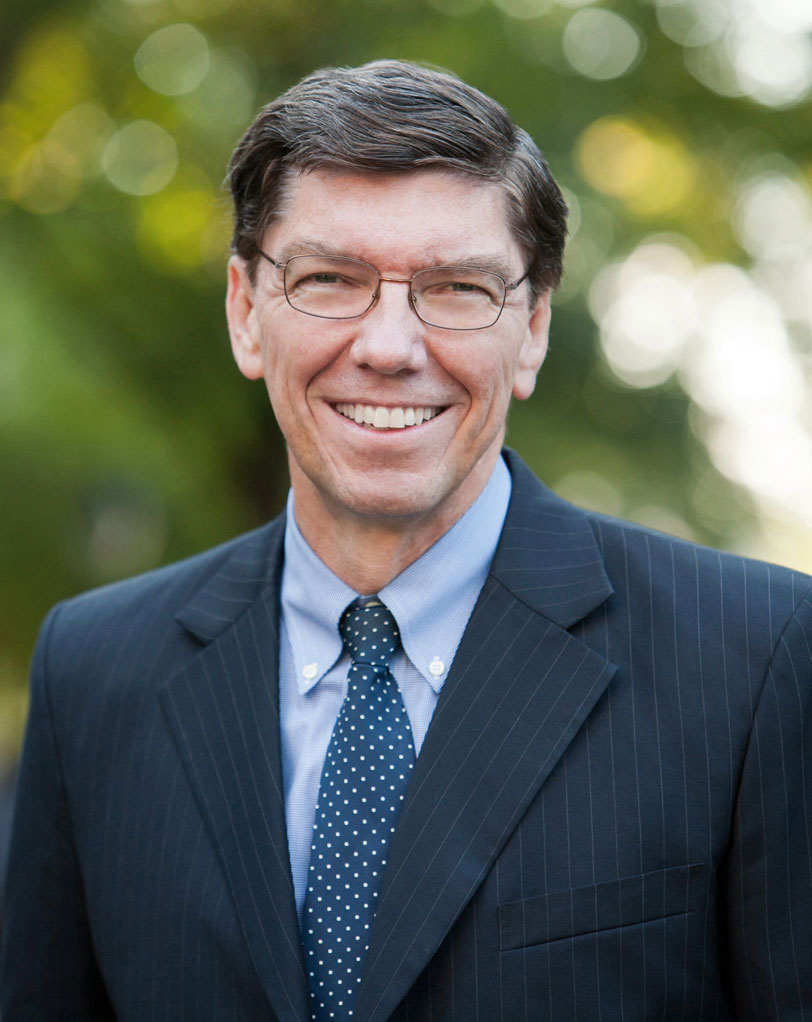 Clayton Magleby Christensen was born on 6 April 1952, in Salt Lake City, Utah, to Robert M. Christensen (1926–1976) and his wife Verda Mae Christensen (née Fuller; 1922–2004). He was the second of eight children and grew up in the Rose Park neighborhood west of the railroad tracks in Salt Lake City. He and his siblings were raised as members of The Church of Jesus Christ of Latter-day Saints (often referred to as “the Mormon Church”).

He attended West High School – the oldest public high school in the state of Utah – where he was student body president. He later attended Brigham Young University (BYU), Harvard University, University of Oxford, and Harvard Business School. While at BYU, he took a two-year leave of absence from 1971 to 1973 to serve a full-time mission for the Church in South Korea and became a fluent speaker of Korean. He returned to BYU after completing his missionary service, and in 1975 graduated with an Honors B.A. summa cum laude in economics. Upon graduating, he won a Rhodes Scholarship and spent two years studying applied econometrics at the University of Oxford, receiving an M.Phil. in 1977. He was an avid basketball player who stood 6 ft 8 in (2.03 m) tall, and later became the starting center on the men’s basketball team during his time at Oxford.

Christensen then returned to the United States and moved to Harvard University to pursue an MBA at the Harvard Business School, which he earned with high distinction in 1979. He also received a Doctor of Business Administration degree in 1992. After completing his doctorate, he joined the Harvard Business School faculty where he taught an elective course he designed called “Building and Sustaining a Successful Enterprise,” which teaches how to build and manage an enduring, successful company or transform an existing organization, and also in many of the school’s executive education programs. He was awarded a full professorship with tenure in 1998 and held eight honorary doctorates and an honorary chaired professorship at the National Tsinghua University in Taiwan. 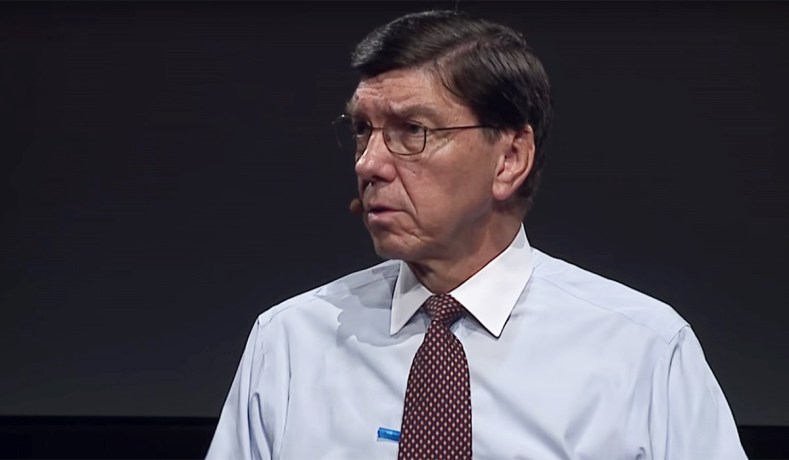 Clayton Christensen was an American academic and business consultant who served as the Kim B. Clark Professor of Business Administration at the Harvard Business School. In 1995, he introduced “disruptive innovation,” the most influential business idea of the early 21st century, in the Harvard Business Review. The theory and the term burst into the public consciousness in 1997 when he published his book The Innovator’s Dilemma: When New Technologies Cause Great Firms to Fail. Soon afterward, Intel CEO Andy Grove stood up with a copy of the book at COMDEX in Las Vegas and declared it the most important book he had read in a decade. The book received the Global Business Book Award in 1997 and the Economist named it one of the six best business books ever published.

Christensen initially used the term “disruptive technologies.” Grove dubbed it the “Christensen Effect.” After Christensen altered it to “disruptive innovation,” the term became ubiquitous. Five years ago, the Economist said it had long since entered the zeitgeist. Three years ago, Quartz.com called Christensen “possibly the most influential management thinker in Silicon Valley.” 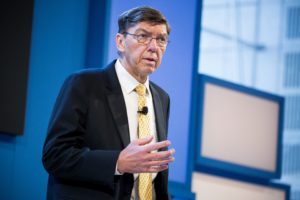 In 1999, Andy Grove and Clayton Christensen appeared together on the cover of Forbes magazine — and both Christensen and the business world were changed forever. The theory made him a key influence on Silicon Valley powerhouses like Netflix and Intel and twice earned him the title of the world’s most influential living management thinker. Apple’s Steve Jobs, Amazon’s Jeff Bezos, Netflix’s Reed Hastings, and Intel’s Andy Grove looked to this influential management thinker.

In 2000, Christensen founded Innosight LLC, a management consulting and investment firm specializing in innovation. In 2005, together with his colleagues at Innosight, he launched Innosight Ventures, a venture firm focused on investing in South Asia, Southeast Asia, and East Asia. In 2007, he co-founded Rose Park Advisors LLC (named after the neighborhood in Salt Lake City where he was raised), a venture capital firm that applies his research as an investment strategy. He also created the Clayton Christensen Institute for Disruptive Innovation to continue refining his life’s work.

Clark Gilbert, a Christensen protegé and president of BYU-Pathway Worldwide, said, “Clay created a way of thinking that gave others the tools and the framework to discover things that had never been thought of before, to see things they could never have seen on their own.” In a statement shared on Friday, 24 January 2020, with the Deseret News, Nitin Nohria, dean of the Harvard Business School, said, “We were heartbroken to learn today of the passing of Clayton Christensen. His loss will be felt deeply throughout our community. Clayton’s brilliance and kindness were equally evident to everyone he met, and his legacy will be long-lasting. Through his research and teaching, he fundamentally shaped the practice of business and influenced generations of students and scholars.”

The final dozen years of his life were marked by health concerns. In 2007, he suffered a heart attack. In late 2009, he was diagnosed with follicular lymphoma. While speaking in a church meeting in 2010, he suffered a stroke that left him with expressive aphasia. The storyteller still could think and reason but no longer had the ability to direct his mouth to express the words in his head. He worked ceaselessly and successfully to relearn how to speak, but he had trouble finding words for the rest of his life.

Carlton Christensen said his brother had been under treatment for leukemia for the past year, a rare result of his previous cancer treatment. He was hospitalized on 12 January 2020. He passed away on 23 January 2020, due to complications from cancer. 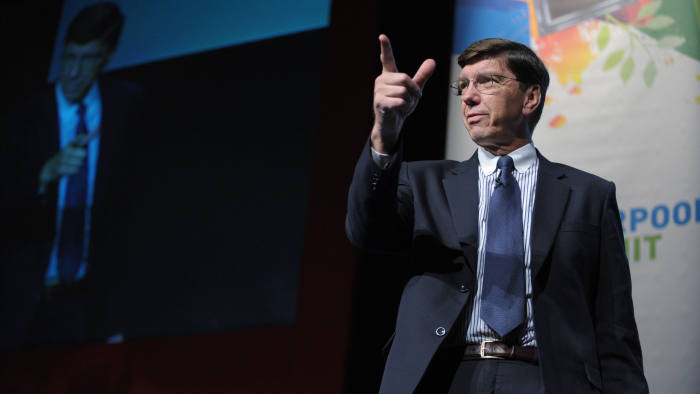 Clayton Christensen’s work will outlast him. In 2012, after Thinkers50 ranked him the world’s most influential living management thinker for the first time, The New Yorker published an 8,800-word profile titled, “When Giants Fail.” The title referred to the corporate titans taken down by disruptive innovations. And,  just last week, Forbes published an article titled, “It’s Our Choice, Solve the Innovator’s Dilemma or Perish.” Thinkers50 released global rankings of management thinkers four times between 2011 and 2017; Christensen finished first, second and third. The final time, the list called him “the disruptive guru.” Christensen was inducted into the Thinkers50 Hall of Fame in 2019.

Clayton Christensen lived in Belmont, Massachusetts, with his wife, Christine, whom he married in 1976. They had three sons—Matthew, Michael, and Spencer—and two daughters—Ann and Catherine. Matthew Christensen, their eldest son born in 1977, stands 6 ft 10 in (2.08 m) tall and played college basketball at Duke University, where he was a member of Duke’s 2001 National Championship team. 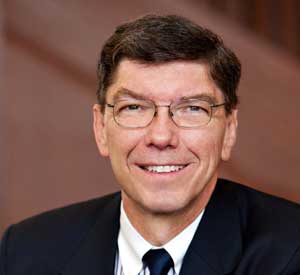 As a member of The Church of Jesus Christ of Latter-day Saints, Christensen served in several leadership positions. He served as an area seventy from 2002 to 2009. He also served as a counselor in the presidency of the Massachusetts Boston Mission and as a bishop.

In addition to 10 books on business, he wrote about his Latter-day Saint faith, which he summed up in a document called, “Why I Belong, and Why I Believe.” His book “The Power of Everyday Missionaries: The What and How of Sharing the Gospel” is a popular work on the topic. He was also a driving force behind and wrote the foreword for Kristen Smith Dayley’s book, “For All the Saints.” In 2011, Christensen published two books: The Innovative University and The Innovator’s DNA (Harvard Business Press). More recently Christensen has focused on applying his ideas to social innovations including healthcare and development in Africa.

You may also be interested in reading Clark Gilbert: How will you measure your life? A tribute to the life of Clay Christensen.