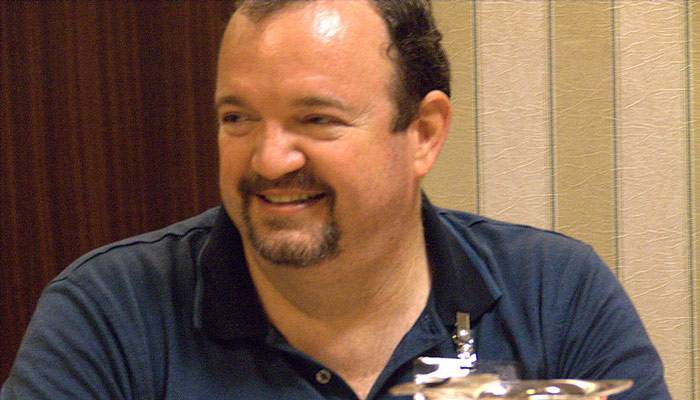 It was in 1981 — between jobs and wanting to buy shoes for his children — that he approached TSR about buying two of his modules . . . and ended up with a job instead. That job led to his association with Margaret Weis and their first publication together: Dragonlance Chronicles. Since 1985 they have jointly authored over thirty books. Tracy’s first two solo novels, Requiem of Stars and The Immortals, were published in the spring of 1996. Tracy remains highly active in his church.

Tracy Hickman has what many young men would consider a dream job. In 1999, he was named one of The Millennium’s Most Influential Persons in the field of adventure gaming by Pyramid Magazine. In 2002 he was inducted into the Origins Hall of Fame, partly due to his work on Dragonlance.

Born in Salt Lake City, Utah, Hickman served a mission for the Church of Jesus Christ of Latter-day Saints in Indonesia, although he spent the first six months in Hawaii learning to speak Indonesian and waiting for visa approval. He says he sometimes bases magical phrases in his books on Indonesian.

On his personal website, he writes, “While I taught many lessons on the church, my mission was also very much a mission toward my own salvation. I studied and learned. My own faith grew in that fertile, distant land. I served in Surabaya, Jakarta and Bandung. There I found myself and God — it seems strange now that I had to go so far away to do so.”

Three months after returning home from Indonesia, he married his long-time girlfriend, Laura. It was Laura who introduced Tracy to Dungeons and Dragons, and he wrote his first adventure games with her. They still partner on many of his creations today, although he also has another writing partner as well. They have four children.

In answer to concerns about whether Dungeon and Dragons was an immoral game, he states the problem with it was more that it took no moral stand at all. “I cannot speak for others who design these games but I can say with assurance that the games I designed while there always took a very carefully calculated moral slant and tried to teach positive values as central to their design. I would strongly admonish others who design their games to look beyond the illusory dream itself to the message that their games convey. I also strongly admonish anyone who is playing these games to carefully select only those settings and scenarios that espouse positive moral structures.”

Hickman feels that because players often refer to their characters in first person, meaning they speak as if they are the character, game creators and game masters have a responsibility to be certain actions have consequences. If this happens, players learn good lessons instead of bad ones.

In addition to creating games, Hickman also writes fantasy novels. He wrote his first novel as a child. Currently, his novels are much longer than the brief story he first created, and are often written with his wife.

He is very open about his membership in the Church of Jesus Christ of Latter-day Saints. A large portion of his personal website is dedicated to discussing his faith and the things he believes. He states:

I give you my testimony that God lives; that Jesus is the Living Christ. I know this as fact more sure than the rising of the sun each morning. I know this as a fact more surely than my five physical senses can attest. I have known His truth and cannot deny it. I have heard His voice and while I have not always liked what He has said to me, I have known the truth of His will.”

An interview with Author Tracy Hickman by Rob Johnston

Tracy Hickman is a New York Times Best-Selling Author and a returned missionary. Tracy co-authored The Dragonlance Trilogy, The Darksword Trilogy, and many others. He also led the team that developed the Dragonlance campaign setting for Dungeons and Dragons.  He currently resides in Utah with his wife Laura.

(TRH) my father was getting his master’s degree at the University of Utah when I was born. The first home that I remember was a set of quad apartments on the northeast corner of tenth East and third South. While it must’ve been a difficult time for my parents, I remember it is a good time. I spent an entire week on the Romper Room program than being broadcast on KSL television. At Christmas time, my brother and I were always taken downtown to ZCMI to see Santa Claus. I remember my mother taking my brother and me downtown on the public bus. I enjoyed pulling the cord whenever we were approaching or stop. One of my favorite memories, however, was when the bookmobile would stop on the corner by our apartment. That was always a magical place for me. I have always loved books and stories.

You served a mission in 1975 in Indonesia.  How did that experience influence your writing and other creative projects?

(TRH) My experience as a missionary influenced nearly every aspect of my life, including my writing. Looking back, I see the journey of my mission very much like Joseph Campbell’s hero’s journey as I left my familiar home and passed into the realms of power and magic. My journey, too, had trials to overcome and helpers along the way but in the end I obtained a number of prizes which I brought back with me. The first was a deep and abiding love for all mankind regardless of their beliefs, principles or religion. I came to see all of humanity in its diversity as children of God. Secondly, I came to an abiding faith which has continued to grow throughout the subsequent decades. Both of these treasures affect every aspect of my life including my writing.

People occasionally ask me how it is that I can justify writing books filled with pantheons of fictitious gods and still consider myself to be a good Mormon. I always reply that I have never seen any difference between what I write and what I believe. To me, the pantheons which spring from my imagination are pale shadows and types of the God that I know. Christ himself taught in parables and in my own, far lesser way I see my fantastic tales as trying to emulate him in this.

You authored over forty books with Margaret Weis.  How did she receive your beliefs?

(TRH) before we met, Margaret had been an editor for what in those days was called the Reorganized Church of Jesus Christ of latter-day Saints in Independence, Missouri. That fact, perhaps, is emblematic of our relationship: profound differences in philosophy explored over essentially common ground.

There was a time when Dungeons and Dragons had a bad reputation (completely unwarranted).  Many churches shunned the game and called it evil.  As a Christian yourself, did you receive any flak from members or other churches for playing such a huge part in the development of Dungeons and Dragons?

(TRH) At one point, not long after I began working at TSR Inc. (a company that produced the dungeons and dragons game) I recall being called out of our church in Elkhorn, Wisconsin for an interview with a Stake Representative from Madison. He asked me if there was anything wrong with what I was doing for a living. I answered him honestly that I thought of the games that I was writing as an extension of my faith and that there was nothing wrong with what I was doing or where I work. That was the first and last time that anyone in my faith ever questioned my association with role-playing games.

I wrote an article many years ago entitled ‘That Evil Game’. It was, I suppose, something of an apologetic which explained that there was nothing even know about the game beyond what good or evil we put into it. This is why I have always written my games with a strong moral component in each one.

Do you have a current calling in your ward?

(TRH) my wife Laura and I are both currently called to the Primary where we teach the eleven-year-old class. They are the most wonderful people in the world and we are grateful for this brief time we have to teach them. In addition, both Laura and I serve as Ordinance Workers at the Oquirrh Mountain Temple. I am grateful to have been the one to perform the first baptism in that Temple when it opened.

Battlestar Galactica had a large amount of LDS allusions.  Are there any of those allusions in your books for which our readers could search?

(TRH) well, you do not have to search very far in my works for allusions to my faith! In Dragonlance, the true gods who have been missing from the world for some time, return with the discovery of the Disks of Mishakal, metallic plates with writings of the old faith on them. This should bring somewhat familiar to you.

I once wrote a novel for the StarCraft computer game entitled ‘Speed of Darkness’. I wanted to make the main character a Mormon. The producers of the game came back to me and told me that there are no Mormons in StarCraft. That may be true, but in my book my main character still comes from the Zarahemla Starport founded by a religious immunity on a world they called Bountiful.

Your current writing partner is also your wife Laura.  What is the writing process there?  (Do you each write a character, a chapter, etc.?)

(TRH) every writing partnership is unique. For Laura and me, we always begin a project with one of us designated as the ‘Wordsmith’ and the other as the ‘Guardian’. The first is the person who does the actual writing on the manuscript while the second participates in the scoping of the plot, characters and setting. Which of us takes which role depends upon the project but whatever we are writing we are a full and complete partnership.

Wizards of the Coast has recently released the Fifth Edition of Dungeons and Dragons.  Within all of the main books they reference Dragonlance often.  Will we see your name on any future Dragonlance books for the new edition?

(TRH) I have honestly given up on trying to predict the future of Dragonlance. I believe that each of the last five books that I have written in that series were at one point or another announced as the ‘last’ in the series. Dragonlance remains a fond and the cherished place for me, and I would be delighted to return there if ever invited to do so.

Tell us a bit about your current projects and where we can get more info.

(TRH) we are always very busy people. Laura and I created a board game last year as a Kickstarter project called Sojourner Tales. We are currently selling those through our website. We are also doing a serial novel online called Dragon’s Bard, the third of which we are finishing right now. We are also writing the second book in our ‘Nightbirds’ series of dark, Gothic tales. I am also the lead story designer for the ‘Shroud of the Avatar’ massive multiplayer online game by Richard Garriott and am writing a series of novels with Richard for the game. As if all of this were not enough, I am a principal partner in a startup company that creates web-based communication suites for artists, authors, celebrities and conventions. These suites are designed to better connect artists with their audiences in unique and helpful ways. I’m very excited about this.