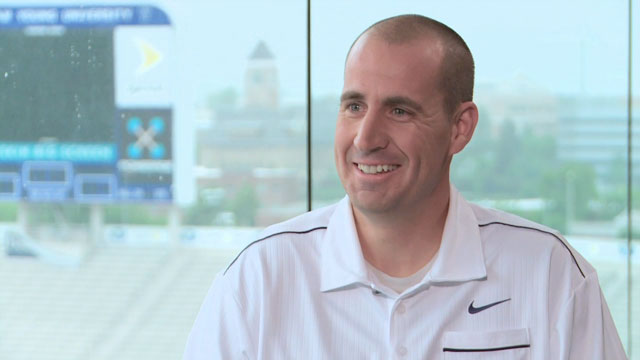 His Personal and Family Life 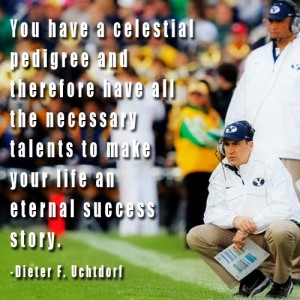 Brandon Doman was born on 29 December 1976. He was raised in Salt Lake City, Utah. He graduated from Salt Lake’s Skyline High School in 1995. He has three brothers (Kevin, Bryce, and Cliff) all of whom played football at BYU. He graduated from BYU with a BS degree in Business in 2002.

In a Deseret News article dated Monday, 3 June 2013, Doman reflects upon his growing up years:

Growing up in my house was quite the experience. I was the youngest of four boys. I wasn’t as fast, and I certainly wasn’t as competitive as my brothers. I just wasn’t as intense. I don’t know if I had the same drive as they did. I think they were hoping that I would find a piano, a dance class or something that would work for me.

We were raised to believe that if your mind could conceive it, and your heart could believe, then you could achieve it.

Doman dared to believe and before long he was enjoying a life of success and accolades from the sports world. He recalls that even with some mention of the possibility of winning the Heisman, and eventually being drafted by the San Francisco 49ers in the 2002 NFL Draft, there was never any jealousy or sibling rivalry between him and his brothers. In fact Doman says, “They were by far my biggest fans. I look back at that now, and I think these three knuckleheads didn’t think that I was going to amount to anything, and it was fun to see the opportunities come and for my brothers to enjoy that moment with me.” [1]

There is a Reason for All Things

Coach Mendenhall officially announced on 6 February 2013 that Doman’s decision to leave the Cougars was something that had been mutually agreed upon, however, Doman admits that even though he was “willing to accept a demotion, he still doesn’t know why Mendenhall and new offensive coordinator, Robert Anae, didn’t want him.” [2]

During a 35-minute interview held later that month with DJ and PK on 97.5-FM and 1280-AM The Zone, Doman decided to speak publicly for the first time since the ending of the Cougar’s season in December. He discussed several things during the course of the interview, and in a “dignified and professional manner, he also disputed Mendenhall’s assertion that his departure was a joint decision.” [2] He made the following comments concerning the matter:

So I don’t know that it was mutual all the way. But I certainly over time realized for some reason, and I don’t know that I’ll ever really know the answer to this, it was a significant conflict for me to be in that building with Robert and Bronco. [2]

Instead of viewing his dismissal as a total defeat, he has decided to continue to live up to the motto that he had been raised with, “If your mind can conceive it, and your heart 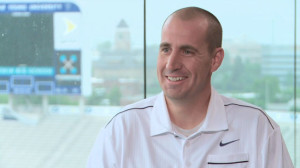 can believe, then you can achieve it.” He realizes that this is only a temporary setback, and that bigger and better things are ahead for him.

Being a coach is only part of his life. He is also a family man. He is married to Alisha Barker and together they have five children. In the Deseret News article he recounts the following:

I came home one day and my little boy Jace, a little blond-haired 8-year-old, was standing there with a mitt, a ball, and a bat. He asked if I would go outside and play catch with him. I realized that this was a time and chance, with my kids at impressionable ages, to focus on them.

I don’t know if I’ll ever coach again, and I don’t know that that’s real important today. What’s important to me is this opportunity I have to spend time with my wife and kids and be home.

If there was one principle that I want to teach my kids — it’s that you try as hard as you can, and always believe. [1]

Victory in the Wake of Defeat

On Monday, 1 April 2013, Doman officially announced that he has entered the business world, working alongside his family. He has partnered with his two brothers, Bryce and Kevin, and their father, Verl, in a business venture known as HomeSports, formerly Doman Sports.

We are excited to have this opportunity to come together and have Brandon join our efforts,” Kevin Doman said. “This is something we have wanted to do together for a long time. Our commitment is to accentuate the positive principles and genuine values gained from sports — particularly from the influence that home sports can have within the family and home. [3]

Damon may return to coaching someday, but for now he is content to be working with his family in their new business venture, but most of all, he is happy to be able to have time to spend with his wife and 5 children. His life thus far is a prime example of what can be achieved if a person tries hard and believes. Through his example he has also shown that there can be victory in the wake of defeat.

Families Are Central to God’s Plan