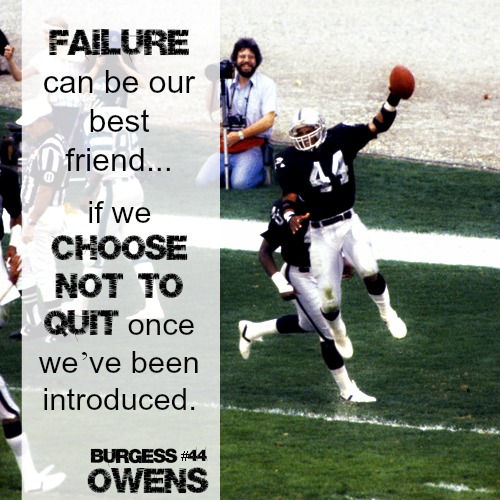 Clarence Burgess Owens born August 2,1951 in Columbus, Ohio  was a safety who played ten seasons in the NFL for the New York Jets and the Oakland Raiders. He was a part of the Raiders Super Bowl XV winning team.

This is the story of the conversion of Burgess Owens, former NFL football player, and his family to The Church of Jesus Christ of Latter-day Saints.  They were converted through the example of LDS teammates and the testimonies of enthusiastic missionaries.

Burgess Owens, born Clarence Burgess Owens on 2 August 1951 in Columbus, Ohio, is a retired ten season veteran of the National Football League (NFL), having played the position of free safety for the New York Jets and the Oakland Raiders.

Owens, who was raised in a Baptist home, is the son of a retired Florida A&M agronomy professor. He grew up in Tallahassee, Florida, in the 1960s, during a time when racial tensions and racial segregation was at its peak. He credits the many opportunities that he has had in life to growing up in a strong Black community during such turbulent times where the opportunities for change abounded.

Only in America could we have all these changes and growth. We have opportunities for anyone who can open their eyes and see them,” Owens said. “I’m glad I grew up when I did. It gave me the perspective to be optimistic. [1]

Owens graduated in 1969 from Rickards High School in Tallahassee, Florida. During his high school years he became one of only four Blacks to ever become part of a football team that was made up of predominantly White players. “It was similar to what happened in the movie, ‘Remember the Titans,'” Owens said. “That was pretty much my experience.” [2]

After high school he attended the University of Miami, being the third of four Black athletes recruited to play for the university at that time. “Owens played for the Hurricanes from 1970-72, recording 160 tackles, eight interceptions and three fumble recoveries and earning All-American honors” while playing the position of defensive back, and would be named MVP of the Senior Bowl.  [2]  During his time playing for the Hurricanes, the team did not see one winning season. However, “Owens’ impact at Miami was such that in 1999, his name would be added to the famed “Ring of Honor” next to that of quarterback Vinny Testaverde.” [2]

In 1973 he was chosen as a first round draft pick (13th overall) for the New York Jets. During his rookie season, on 28 October 1973, he returned a kickoff 82 yards for a touchdown against the Denver Broncos, This would be the only touchdown scored by the Jets on a returned kickoff during the 1970’s. Owens soon became a continuous starting player for the Jets; however, he experienced 7 seasons of continuous defeat. It wasn’t until his 13th season as a professional football player, as part of the 1980 Oakland Raiders’ championship team, when they celebrated their victory in Super Bowl XV over the Philadelphia Eagles in 1981, that Owens finally became a part of a winning team.

“Those were lean years,” Owens said. “I call them my character-building years … a continuation of my education as an eternal optimist. You learn after losing quite a bit, year after year, that you have to continue to work hard, stay tough and endure to the end before it’s going to work out.” [2]

Being raised in a strong Baptist home, religion has always been an integral part of Owen’s life. He once remarked to his father that one of his primary goals in life was to become a Baptist minister and travel to Russia “because so many there needed to know about Christ.” [2] His father responded with, “Why go to Russia? There are plenty of people here in the United States that could use that message.” [2]

In 1967, during the period of integration in Tallahassee, Florida, Owens became actively engaged in the activities of an interracial club that had as its main objective “building unity and finding commonalities.” [2] In order to achieve their mission, the group visited various churches of different faiths in the community. They even visited an LDS chapel where Owens recalls seeing two missionaries wearing black name tags. “Someone in the club was a member. I remember being told by our instructor that Mormons didn’t like blacks, so we will go there but don’t be offended,” Owens said. “So, I kind of went in with a preconceived notion.” [2]

Introduction to the Restored Gospel

Owens is a member of The Church of Jesus Christ of Latter-day Saints (inadvertently referred to as the Mormon Church by the media and others) since 1983 when he and his wife became members, and he often shares his faith publicly with large audiences. He remarks that for him and his wife, becoming members of The Church of Jesus Christ was the beginning of “a very good journey, one in which we have gained more and more faith.” [1] On Sunday, 3 February 2013, in the Herriman LDS chapel, located in Herriman, Utah, he joined with several other male family members to bless his newest granddaughter.

Owens and his wife Josie were introduced to The Church of Jesus Christ during the Oakland Raiders’ 1982 season by his teammate Todd Christensen. Owens knew that teammates Todd Christensen and quarterback Marc Wilson both had played at BYU and both were members of The Church of Jesus Christ, but because of his apprehensions about Mormons, he avoided discussing religion with either of them.

“We got to be very close friends. They didn’t hide the fact they were LDS … but I decided to not to ask him about his religion because I didn’t want to not like him. So we talked about everything else,” Owens said. “It was a good thing that we didn’t talk about religion for a few years because we had a chance to get close to them without any pressure. Win or lose, they (the Christensens) were consistent. We had good, wholesome fun when we got together.” [2]

Owens was Baptist and Josie was Catholic, but they had not attended religious services of either faith for quite some time. In the summer of 1982, they decided that it was time “to find the Lord,” and so they began their quest by investigating churches of different faiths.

“We had won a Super Bowl, I was starting (on the defense) and having success, and we were doing pretty well financially,” Owens said. “But there was still a void that needed to be filled. … We knew something else was out there that had some answers for us. We did a lot of searching but we didn’t come up with anything we felt good about.”  [2]

The Owens’ were invited to Thanksgiving dinner at the Christensen’s in November 1982, and two missionaries from The Church of Jesus Christ were also present. Although the dinner conversation was not centered around the topic of religion, Owens still recalls that he left with a sense of wonderment as to how two young men, 19-20 years of age, could have such amazing insights on life.

Two weeks later, Kathy Christensen invited Josie to attend Church with her. She accepted and came away very impressed, especially with her experience that day in Relief Society (the women’s auxiliary of The Church of Jesus Christ). Owens recalls that his wife felt welcomed and appreciative of the information that she had obtained. Josie invited Burgess to attend services at the LDS Church the following week, and he too came away having had a positive experience. “I left there with a feeling that I had learned something,” Owens said. “From that point, we were an elder’s dream because we said yes to almost everything.” [2]

They began taking the missionary discussions and a baptismal date was set, but soon doubts began to creep in. One of Owens’ main concern was the fact that for a period of time in The Church of Jesus Christ, Blacks were not allowed to hold the priesthood. The change in Church policy had only been made a few years prior, in 1978. “There were questions I didn’t have the answers to, and I was trying to figure it out,” Owens said. “I remember staying up until 4 a.m. reading the Bible and praying.” [2] He expressed his concerns to his friends the Christensens, and Todd even did some research to try and help answer Owens’ concerns, but “after much discussion and study, Burgess simply looked at me and thanked me for my efforts,” Christensen said in an email. “It was clear that I had not reached him.” [2]

“He said it’s interesting how the Lord works,” Owens recalled. “He will give you enough to take the first step, then he’ll ask you to take the second step on faith. … That was something that resonated with me. I needed to hear that. I had enough at that time to know it felt right. Todd and Kathy were great examples. We went on faith and got baptized.” [2]

Burgess and Josie Owens were baptized on 31 December 1982 at about 10:00 PM. The following April, Owens retired from the NFL.

Faith Has Its Rewards

Owens is deeply thankful for how the plan of the restored gospel of Jesus Christ has blessed his life, as well as the life of his family, and those who have come to accept the gospel as a result of their humble missionary efforts.

“The church has been everything to us,” Owens said.

“It (the church) has given us perspective of how important family is. It has helped us understand the parameters that the Lord wants us to live within,” Owens said in a telephone interview. “We don’t have to wonder or drift with society; the Lord has a very strong and clear pathway of what is right and where blessings come from. Understanding that, we continue to convert ourselves.” [2]

Owens and his wife Josie have six children and six grandchildren. He is a successful entrepreneur and executive in both the computer and financial fields, and is a highly sought after motivational speaker.

Worship with a Local LDS Congregation