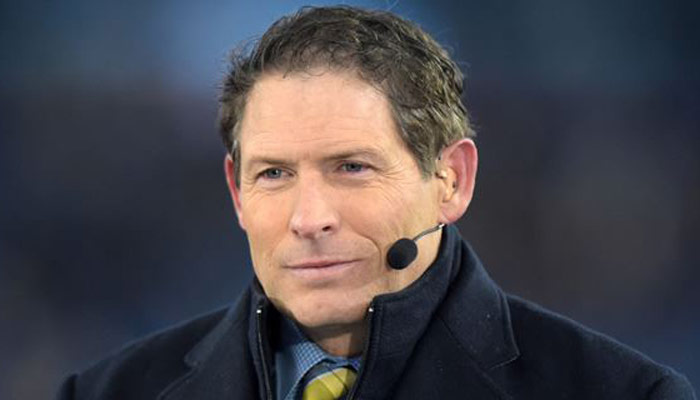 A descendant of Brigham Young, he graduated from BYU.   In 1985, he signed with Tampa Bay.   In 1987, he was acquired by San Francisco where he played in the shadow of the great Joe Montana, replacing him in games where he became injured but performing with excellence.   When Montana retired, Young set to work at breaking every record he ever set and became one of the finest NFL quarterbacks of all time.   In 1994, he earned his law degree.   In 1996, he was interviewed by Mike Wallace and appeared on 60 minutes in a 15-minute segment on the Church which included an interview with Gordon B. Hinckley and J. Willard Marriott, Jr.   In 1998, he turned down the opportunity to appear in There’s Something About Mary.   In 1999, he suffered his fourth concussion in three years and decided to retire from professional football.   He complained that business interests of the league made it difficult to acquire adequate linemen to protect the quarterback.   In 2000 he and his wife were the first couple to be married in the new temple in Hawaii.

Steve Young is a member of The Church of Jesus Christ of Latter-day Days, sometimes called the “Mormon Church.”  He has been one of the best and most famous quarterbacks ever to play in the NFL.  Steve was named MVP of the NFL in 1992 and 1994, the MVP of Super Bowl XXIX.  He was inducted into the Pro Football Hall of Fame in 2005, the first left-hander to be inducted.  He holds the NFL record for the highest career passing, and he won six NFL passing titles.    Steve was the product of Brigham Young University‘s quarterback mill, which turned out a string of famous and accomplished quarterbacks.  Steve was born Jon Steven Young (he’s a descendant of Brigham Young) in Salt Lake City, Utah, on October 11, 1961.

Steve attended Greenwich High School in Greenwich, Connecticut, and was a multi-sport athlete. He went on to play for LaVell Edwards of Brigham Young University, and was a Heisman Trophy finalist. Steve’s father was LeGrande “Grit” Young, who played football at BYU in the late 1950s. He led the school in scoring in 1955 and in rushing and total offense in 1959. Steve is married to the former Barbara Graham. They married on March 15, 2000, in a ceremony at the Kona Hawaii Temple in Kailua-Kona on the island of Hawaii. They have two sons and two daughters together.

Once Steve Young got to BYU, he wasn’t considered for the quarterback position.  He was fast, but his passing wasn’t as good as his speed.  But he kept practicing.   He followed champion Jim McMahon and became the starting QB for the BYU Cougars.  It was Steve’s season as a senior (1983) at BYU that was so spectacular — he passed for 3,902 yards and 33 touchdowns.  He set an NCAA record for completed passes.  At the same time, BYU set a record for offensive yards gained and finished the year with 11 wins and only one loss.  Steve was named First Team All American and came in second for the Heisman Trophy.  He did win the Davey O”Brien National QB Award, judging him best QB in the nation.   In 2001, he was enshrined in the College Football Hall of Fame.

Once he was ready to go pro, Steve signed a record-breaking contract, which equaled $40 million.  The team was the L.A. Express of the US Football League, and that made him the highest-paid player in football history.  The team ended up bankrupt, however.  Steve continued to receive the money due him in his contract in the form of an annuity.  Steve then signed with the Tampa Bay Buccaneers in 1985.  The team performed poorly, however, and Steve’s performance was also disappointing.  He was noticed by San Francisco 49ers coach Bill Walsh, who blamed Steve’s problems on the Bucs organization and not on Steve.  Steve was traded to the 49ers in 1987 as backup to Joe Montana.  He stayed with the team for 13 years and became one of the best quarterbacks in history there.  He was selected (of the three 49ers QBs) to play in the Pro Bowl.  He was so impressive that Joe Montana was traded to the Kansas City Chiefs.

For the 1994 season, Steve Young was named the MVP of Super Bowl XXIX as the 49ers defeated the San Diego Chargers 49-26. In 1994 he threw for 3,969 yards, a then franchise record 35 touchdown passes with only 10 interceptions, completed an NFL record 70.28 percent of his passes, and broke Montana’s single season mark with a then record 112.8 passer rating. He was named NFL MVP for the second time.

The 1999 season would turn out to be Steve Young’s last. He was plagued by concussions throughout his career. Officially, he had suffered seven concussions. He was inducted into the Pro Football Hall of Fame in 2005.  A left-handed thrower, Young was famous for his ability to “scramble” away from the pass rush. He has the third-highest single-season passer rating at 112.8 (set in the 1994 season), next to Indianapolis Colts’ Peyton Manning (121.1 QB rating in 2004), and New England Patriots’ Tom Brady (117.2 QB rating in 2007). However, among quarterbacks with at least 1,500 passing attempts, Young’s career passer rating of 96.8 is the highest of any quarterback in NFL history. The San Francisco 49ers had his #8 jersey retired during a halftime ceremony against the New England Patriots on October 5, 2008. He was the 11th player in team history to receive this honor.

Steve Off the Playing Field

Steve earned his law degree from Brigham Young University, and after his sports career ended, he has been active in many business ventures. He currently serves on the board of directors of Nutraceutical Corporation in Park City, Utah, and is active in the Forever Young Foundation, which he started as a charitable organization. Forever Young serves children facing significant physical, emotional, and financial challenges by providing academic, athletic, and therapeutic opportunities otherwise unavailable to them.

Steve serves as a National Advisor to ASCEND: A Humanitarian Alliance. This non-profit organization plans expeditions to African and South American countries to provide life skills mentoring with sustainable solutions in education, enterprise, health and simple technology. He has been involved in business ventures which include: (a) a stint with private equity firm H&G Capital Partners, which was founded by billionaire industrialist Jon M. Huntsman and former Bain Capital executive Robert C. Gay and (b) a co-founder of the private equity firm, Sorenson Capital, in Lehi, Utah. Moreover, he currently sits on the board of Foundry Networks.

Steve currently serves as an analyst for ESPN, the cable channel dedicated to sports.  Steve also serves as the National Spokesman for the Best Shot Foundation, an organization founded by former Save Darfur Coalition executive director and founder, David Rubenstein.  He began his affiliation with the organization in 2009, when he became the honorary league commissioner for their charitable dodgeball tournaments held on college campuses nationwide.

Read more about Steve on MormonWiki.com