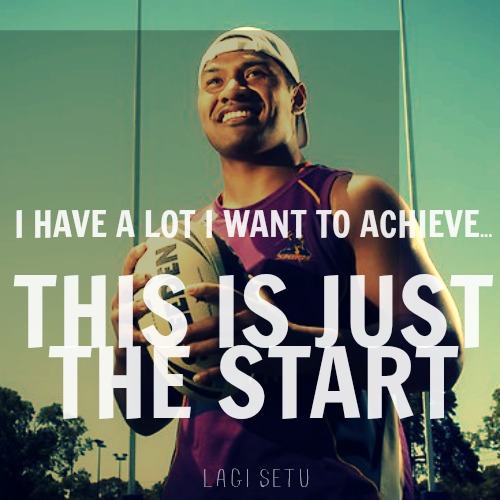 Lagi played his junior football in Ipswich, Queensland, playing rugby union, before being signed by the St. George Illawarra Dragons. He played for the Dragons’ Premier League reserve-grade team in 2006. In Round 2 of the 2007 NRL season he made his NRL debut for the Dragons against the Newcastle Knights. In 2008, Setu played 2 games for the Dragons’ Toyota Cup team, scoring 1 try. He then signed a contract with the Brisbane Broncos starting in 2009.  In 2010, Setu announced he would be leaving the Broncos to serve a 2-year mission for The Church of Jesus Christ of Latter-day Saints in Birmingham, England starting in 2011. After returning from his missionhe signed with the with the Melbourne Storm starting in 2013.

Lagi says his two years as a Mormon missionary without playing Rugby actually made him a better footballer. He served in the England , Birmingham Misson.

Lagi told news.com.au He wants to ditch the tag as “that Mormon guy” and be known as a consistent footballer. “Everyone does just think of me as that Mormon guy and that’s fine, I get it, but I would like be thought of as someone who is playing good footy,”

Lagi Setu shocked the rugby world when he left his lucrative professional career in 2010 to serve a two-year proselytizing mission for The Church of Jesus Christ of Latter-day Saints—sometimes inadvertently called the Mormon Church. As the 2010 season came to a close, people were asking, “What is he thinking?” [1] But members of The Church of Jesus Christ know exactly what he was thinking. Joshua 24:15 reads, “Choose you this day whom ye will serve … but as for me and my house, we will serve the Lord.” For Setu, that meant leaving everything and going on a mission.

Elder W. Christopher Waddell, a member of the Seventy (Seventies, as in biblical times, are called to proclaim the gospel and build up the Church), said of missionary work:

Your mission is a training ground for life. The experiences, lessons, and testimony obtained through faithful service are meant to provide a gospel-centered foundation that will last throughout mortality and into the eternities. [2]

And, as Setu explains, the lessons learned are applicable in all areas of life. He said, “Being away on the mission … taught me to focus more, and that has helped me in my football this year.”

From the Rugby Field to the Mission Field—and Back

Setu, a New Zealand native, served his mission in Birmingham, England. In The Church of Jesus Christ, missionaries separate themselves from the distractions of the world—including movies, music, television, books, newspapers and the Internet. They also voluntarily limit their contact with home to emails and letters, which they only read one day a week, on their preparation day—except on a handful of designated holidays, when they can call home. By eliminating outside distractions, missionaries are able to focus solely on serving the Lord and preaching His gospel. So when Setu left the rugby field for the mission field, he didn’t look back. The only so-called training he had was pedaling his bike as he knocked on doors in an effort to find people to teach. He said, “I just focused on the people and my calling.” [3]

But halfway through his mission for The Church of Jesus Christ, his manager asked if he was coming back. He had stopped his rigorous physical training to focus on his rigorous spiritual training—and it showed in his weight. He said:

If you know Polynesians, it doesn’t take us much to put on weight— even when we’re not eating that much junk food. To lose a kilogram is massive for us, so when I went on the mission I knew I was about to explode. My body started feeling really out of shape because I didn’t think about [returning to play rugby] at all. …

But toward the end I thought about it a lot and decided I wanted to give rugby league another crack. Deep down, I couldn’t lie. I wanted to come back. [3]

So after lengthy negotiations—more drawn out due to Setu’s limited email time on his mission—he chose to sign a one-year contract with the Melbourne (Australia) Storm. [4]

When Setu was on a mission for The Church of Jesus Christ, he taught people about The Book of Mormon—which is another testament of Jesus Christ, a companion scripture to the Bible and a record of God’s dealings with the peoples who lived in the ancient Americas. The Lord tells Ether, an ancient American prophet whose writings are found in these scriptures:

Setu returned from his mission just two days before the team’s training began. He said:

I was dreading my first day. I knew I had no training behind me for two years. I was carrying a bag of boots instead of The Book of Mormon. I just thought it would be an orientation day, but I was so wrong. We did wrestling, weights and fitness checks and all sorts of things. My lungs went into complete shock. I found myself with a lot of fat after the skin-fold tests. It was a shock for me as well as the club. I thought, “This is going to make or break me.” [3]

But lessons he learned on his mission pulled him through the tough times.

What ended up pushing me to keep going were the people I met in the UK. I know it was a different situation, but they had a willingness to change and I took that into consideration. They put the effort in and saw results, like I had to. [3]/blockquote>
He worked hard, lost weight and re-equipped himself with the necessary skills. “Things started to come back, little by little,” he said. [5]

Now Setu is ready to be seen as a consistent “footballer” and not just “that Mormon guy.”

Everyone does just think of me as that Mormon guy and that’s fine, I get it, but I would like be thought of as someone who is playing good footy. I have long way to go but I hope people start to focus on me as just an NRL player. I have a lot of goals in football I want to achieve. This is just the start. [1]

Setu recently signed a two-year contract with the Canberra, Australia, Raiders starting in the 2014 season. [6]