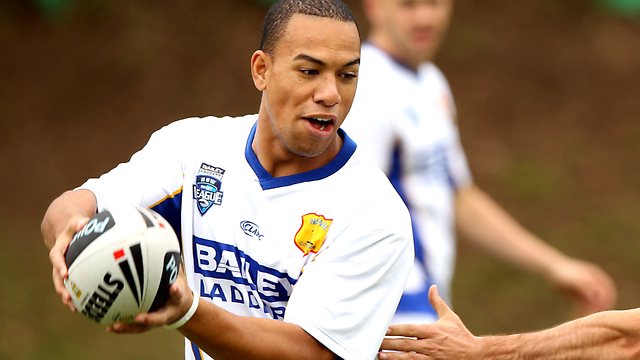 William (Will) Hopoate also known as Viliami in Tonga, is a professional rugby league footballer for the Manly-Warringah Sea Eagles of the National Rugby League (NRL), an Australian professional rugby league club based on the Northern beaches of Sydney, Australia. He was born on 9 May 1992, and is the son of former Australian international, John Hopoate. Will is Australian-born and both of his parents are Tongan. He is also a member of The Church of Jesus Christ of Latter-day Saints.

John Hopoate, Will’s father, was born on 16 January 1974 in Nukuʻalofa, the capital city of the Kingdom of Tonga, located on the north coast of the island of Tongatapu, in the southern most island group of Tonga. He moved to Australia with his family when he was still young. He is a former professional rugby league footballer, and a former Australian heavyweight boxing champion. He played club football for the Manly-Warringah Sea Eagles, Wests Tigers, and Northern Eagles in the NRL competition. John was also selected for Tonga in the Australian national team and in the New South Wales (NSW) State of Origin side. His usual position for most of his career was Wing. [1]

State of Origin is the annual best-of-three series of rugby league football matches between the Maroons and the Blues, who represent the Australian states of Queensland and NSW respectively. Described as “sport’s greatest rivalry,” the State of Origin series is one of Australia’s and the region’s premier sporting events, attracting a huge television audience and usually selling out the stadiums in which the games are played. Despite the existence of international tournaments and State of Origin being a domestic competition, it is frequently cited as being the highest-level of rugby league played anywhere in the world. [2]

There are two wings in a rugby league team, numbered 2 and 5, positioned on each side of the field. They generally are among the fastest players on a team, with the speed to finish an attacking move. Players who hold records for most tries are usually referred to as wingers. [3]

William Hopoate’s Love For the Game

Will joined the Manly-Warringah squads in 2009 at the age of 16 and played the entire year in the Sea Eagles Toyota Cup. He primarily played the position of fullback, but he has also played wing and center. Other than his physical size, speed, strength and general play, he has shown none of the “bad boy” habits which saw his father often on the sidelines and eventually suspended from the game. He has also represented the Australian Schoolboys team.

On 5 June 2011, Will was selected to play State of Origin for NSW in Game 2 against Queensland at ANZ Stadium. He is the second youngest player ever selected to play for NSW, and scored a try on debut helping NSW level the 3 game series at one all with an 18-8 win. Will is a NSW State of Origin three-quarter back, but he has also represented NSW City.

In Round 3 of the 2011 NRL season, Will scored his first ever double against the Newcastle Knights at Brookvale Oval. He was part of the Manly side that defeated the New Zealand Warriors in the 2011 NRL Grand Final where he was denied the opening try but did produce a miracle flick pass that sent Glen Stewart over the line for a crucial try in the second half.

William Hopoate: Man on a Mission

Turning down an impressive offer of $1.7 million to play professional rugby, William Hopoate has decided to answer a much higher calling on his life – to teach the gospel of the Lord Jesus Christ.

Prior to leaving on his mission, and before he was to play in the NRL grand final, in an interview with the Sydney Morning Herald, Will commented on his decision to leave the sport that he loves behind for the next two years while he is on the Lord’s errand:

“I’m still looking forward to serving my mission, but for now I’m focusing with the boys to play the best we can for Sunday’s game,” Hopoate told the Herald. ”I’ve made my decision, and that’s that, nothing’s going to change it, but to win a grand final would be a dream come true and something I would cherish forever. My plan is to go away for two years and then come back and play the sport I love playing.” [4]

Now referred to as Elder Hopoate, the 19-year-old Manly Sea Eagles NRL grand final winner is currently serving a full-time two year mission for The Church of Jesus Christ of Latter-day Saints in Brisbane, Austrailia, a 13-hour drive north from his home in Sydney, Australia. He underwent his mission training in Auckland in November 2011. Concerning his mission thus far, Will has said, “It’s not as bad as people would think. It’s actually quite enjoyable. You get to understand more of the scripture, and mix with other missionaries. There’s nerves and excitement, mixed emotions. Everyone I’ve spoken to says it’s the best two years of your life.” [5] Will has also said:

Everyone is entitled to their freedom of choice. Whether they accept or reject the message is out of our hands, we’re just there to let them choose. We go around to share a message to people about what has blessed not only our own lives but our families, too. We simply want to share this message of hope and love with others.

Our message centres around Jesus Christ and having Him at the centre of the home and the family is very inspiring and uplifting. We all make mistakes in our life and they can cause feelings of guilt and regret, but through Jesus Christ they can be substituted with feelings of peace and happiness. People are seeking true peace and happiness throughout the world and we know the things we share offer that. [6]

No Regrets – The Rewards of Servive

Will is into the sixth month of his two-year-mission. His decision to put faith ahead of fame, God against the game, made headlines last year, For every person who applauded his commitment, others openly questioned the wisdom of putting his career – and a $1.7 million, two-year deal with Parramatta – on hold.

It has been almost a year since he became the second youngest player to represent NSW when he was drafted into State of Origin II, but his reaction to the upcoming annniversary is that it is the furthest thing from his mind. He still expresses that he has no regrets about swapping a promising career for doing the Lord’s work:

I feel very fulfilled. I’m definitely enjoying what I’m doing. I wouldn’t be out here doing it if I didn’t. It is such a blessing to see people who come from different walks of life and to get an understanding of other cultures and religions. It’s such an enjoyable and joyous time and [it’s] one I’ll never forget. [6]

It has made me more self-reliant and independent. Winning the grand final last year was a real highlight [in my life]. It wasn’t just a game, it was the process: the training, the fact every minute on the field during the season counted and I did it with my teammates, but right now seeing the changes in people’s lives when they apply the teachings we share with them is incredible . . . I’m seeing people who have struggled find peace and joyfulness, and it is excellent. [6]

William Hopoate would have made Australia’s Four Nations tour squad if not for his impending mission. He will join Paramatta Fels in the NRL at the end of his mission in 2014. For now, like Nephi of old, Elder Hopate is on the Lord’s errand, and as such, his mind is made up to go and do those things which the Lord commands.

The Book of Mormon (Another Testament of Jesus Christ)

William “Will” Hopoate also known as Viliami in Tonga (born 9 May 1992) is an Australian professional rugby league footballer for the Manly-Warringah Sea Eagles of the NRL. A New South Wales State of Origin three-quarter back, he has also represented NSW City. He is the son of former Australian international, John Hopoate.  en.wikipedia.org

Turning down million-dollar contract offers for two years of nonprofit service might seem silly to some. But that’s just what 19-year-old Australian rugby star Will Hopoate did in May when he chose to become a missionary for The Church of Jesus Christ of Latter-day Saints (Mormons) instead of accepting a lucrative offer to keep playing rugby. newsroom.lds.org