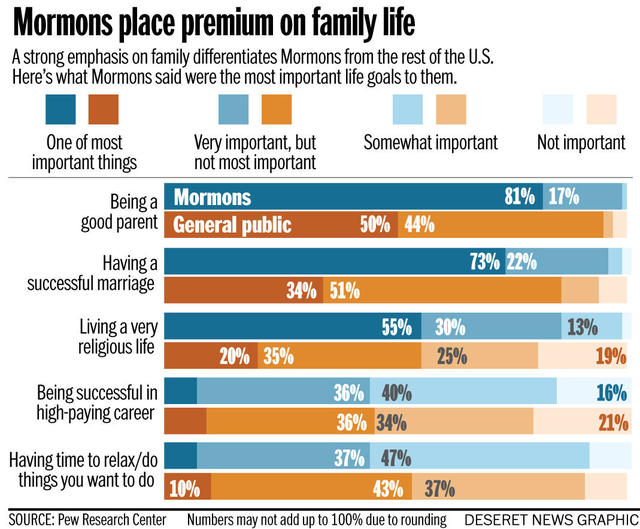 Being parents is just what they always wanted. And they love it.

“Of course we have our crazy moments,” Thompson says, “but for the most part we just try to find the good things in the day and remember that they’re only going to be little for so long.” 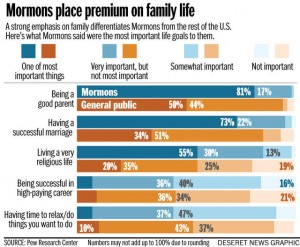 As members of The Church of Jesus Christ of Latter-day Saints, the Thompsons believe that maintaining a strong marriage and raising and teaching children are essential keys to happiness and their most important responsibilities on earth.

In fact, 81 percent of Mormons say being a good parent is “one of the most important things in life,” according to a new survey by the Pew Research Center’s Forum on Religion & Public Life — the first survey of Mormons about Mormons, by a non-LDS research organization.

The survey of more than 1,000 self-identified Latter-day Saints from across the country asked how accepted Mormons feel in American culture, as well as their thoughts on religious practices, political issues and family roles.

With an emphasis on marriage, it should come as no surprise that the Mormons surveyed also had, on average, more children (2.6) than the general U.S. population (1.8).

Thompson grew up wanting to have a large family and be a good mother, but she and her husband have struggled with infertility for nearly nine years — a trial punctuated by the joys of two different adoptions, Ellie, then the twins.

“We said when we finally get to be parents, we’re going to actually sit down and take a little more time to focus on our kids,” Thompson said, who lives in northern Utah. “I’m not saying that other people don’t do that — the perspective we have is just a little different.”

“Family is at the core of our faith,” says Jane Clayson Johnson, a Latter-day Saint and former anchor of CBS’s “The Early Show” who prefers the title of mom to two young children and stepmom to three older ones. “There are so many distractions today that all force us outward, away from core relationships. What our faith does is turn us back toward deep, rich, meaningful relationships in families.”

“It teaches us that families are where we find meaning,” continued Clayson from her home in Boston. “The work I do in my family is the most important work that I’ll ever do.”

That shouldn’t be taken to mean that the average American doesn’t value marriage or family, just that they don’t “go to church every week and get told that’s what they’re supposed to do,” says Marie Cornwall, a professor of sociology at Brigham Young University. Cornwall advised the Pew Center for this survey.

“There’s nothing to suggest that family life is less valued in the United States over time,” she said, “but there’s more that suggests that people are feeling like it’s not possible for them to attain that.”

The pressure comes when a “successful” marriage is defined as having a good job, a hefty retirement account and a lovely home with a white picket fence, Cornwall said. So when people can’t achieve that in today’s tough economy, many feel like they’ve failed.

“For Mormons, there’s a spiritual aspect brought to that (definition of success),” she said, “an effort, in terms of sermons, to try and downplay the material and place more emphasis on the relationships.”

When the survey asked Mormons about working arrangements in families, nearly six out of 10 Mormons indicated they would prefer a marriage where the man works and the woman stays home to care for the home and the children.

LDS college graduates liked this marital structure more than any other subgroup, with 71 percent of them preferring the man to work and the woman to stay home.

In the general population, only 30 percent of Americans would prefer a marriage where the husband works and the wife stays home. Among religiously unaffiliated Americans, it drops to 15 percent who would pick such a scenario.

Almost four-in-10 Mormons would prefer that both parents work and both parents help with child rearing and housework.

For American Fork mom Ruth Ann Dupaix, 37, it’s not a black-or-white decision. Throughout her marriage she has both worked and stayed at home.

“The way we look at it, we try to make it a partnership,” Dupaix says. “It’s more who’s able at the time to do it best. It’s working together, a give and take.”

When she and her husband, Geoff, were first married, her job helped pay for his school. When he finished, she kept working because her employer would pay for her to complete her degree, and education was important to both of them.

Dupaix stopped working when her sixth child was born but has recently gone back to work at a local grocery store three nights a week to help fulfill a family goal to reduce their debt load.

It’s a big pay cut from the job she used to have at a bank, but it’s a more family friendly schedule.

“As part of a family you make sacrifices,” she said. “I’m gone when the kids are asleep, but I’m still here during the day when they need me.”