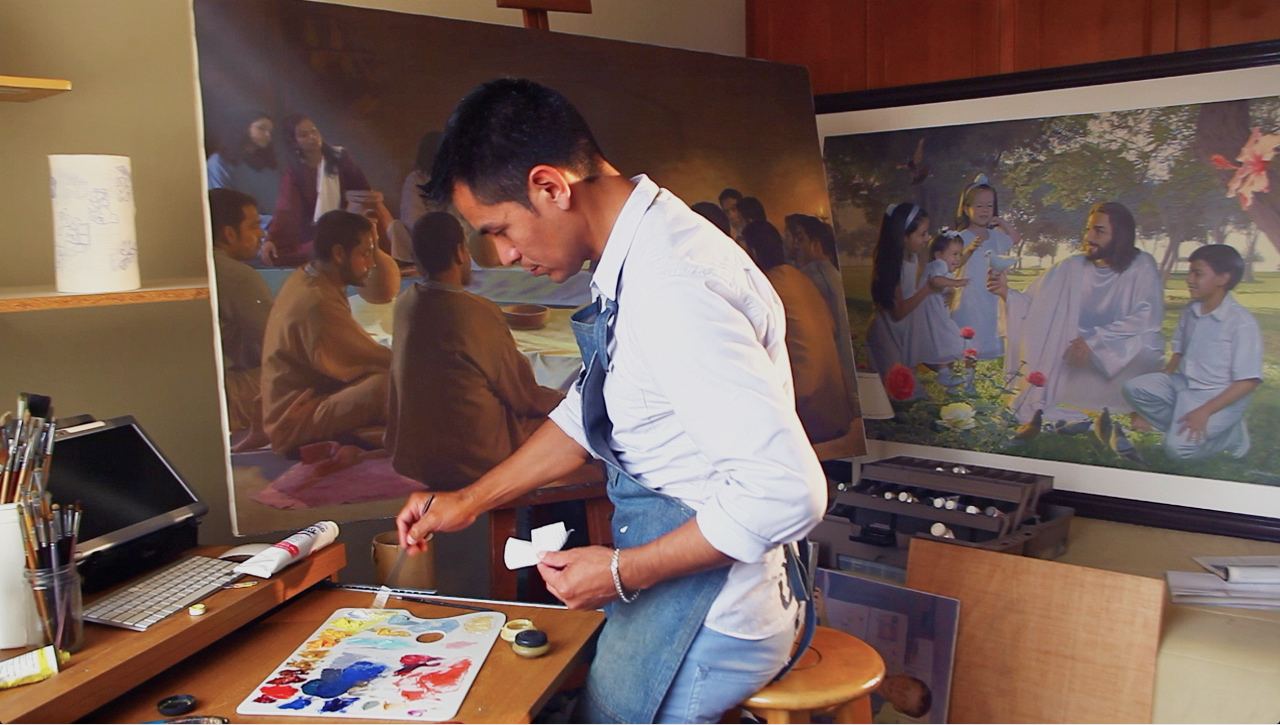 The three main questions of life are: Where did I come from?, Why am I here?, and Where am I going? Though many people take the time to ponder all three questions, the one that perhaps most people spend a considerable amount of time contemplating is the question, “Why am I here?” From our youth we begin to have lofty dreams and aspirations of where life will lead us. Many of us have traveled, or will travel, down many different roads before we finally discover what our real mission and purpose in life is. On his official website, John Zamudio states, “My Personal Mission on earth is ‘To paint for my Savior.'”

John Zamudio is a Peruvian painter, having been born in Lima Peru, and having spent his childhood years in the district of San Luis. He has four other siblings, and is the second oldest of the five.  He took a keen interest in drawing at a very early age as sort of a refuge from being left alone to play because other children incessantly teased him  because of his hands which were permanently scarred from an accident that he suffered at home at the young age of two. In time he was able to hone his new found talent and became quite proficient. It was his amazing drawings that became the bridge to acceptance by the other children.

John was accepted at the age of 17 at the National School of Fine Arts in Lima, Peru. It was there that he was able to learn a wide variety of “artistic techniques and mediums.” [1] In 1991, he began studying oil painting at the Art Museum of Quinta Vergara in Vina del Mar.

Though he had a promising career ahead of him in becoming an artist, John, like so many others on their track to success in life, soon became enticed by the success that the world seemingly had to offer him. He gave up his noble ambitions of becoming an artist to pursue a career in Business Administration, a career path which he followed for 15 years. However, at the end of the road, John found that his new sought after career did not afford him the “stillness and peace of mind he had once found in painting and felt a distinct void in his life.” [1]

However, in 2002, John reached a turning point in his life. He lost everything, and was emotionally broken for four years. He suffered from depression and felt completely disillusioned. He felt he had nothing to show for so many years of hard work.

One day, in the midst of his deep depression, he stumbled across a box of his old art supplies and was inspired to return to painting without fear of failure. He decided to fight for his dreams. [1]

The rest of the story, as they say is history. His paintings are known the world over. He is recognized as an international religious artist. His paintings are regularly exhibited in the Museum of Art and History located in Temple Square in Salt Lake City, Utah.

John Zamudio is a member of The Church of Jesus Christ of Latter-day Saints (mistakenly referred to by the media and others as the Mormon Church.) He was baptized at the age of 15, and served a full-time mission for the Church from the age of 19 to 21. He attributes his success in life to his faith in the Lord Jesus Christ, living his life in harmony with the teachings of the gospel, and following the principles of good health set forth by the Word of Wisdom, a health law of The Church of Jesus Christ.

** This article is a summarization  of John Zamudio’s biography which can be found on his official website at John Zamudio.net.