Every year, in late January, the J. Reuben Clark Law Society holds a fireside at the LDS Conference Center which is broadcast around the world via the church’s satellite system, as well as, streamed live via the internet.

During the course of the annual fireside, the law society bestows its Distinguished Service Award upon a high-profile figure from legal and/or LDS circles. Recent recipients of this prestigious award have included: the late President James E. Faust, formerly of the First Presidency of The Church of Jesus Christ of Latter-day Saints; President Boyd K. Packer, of the Quorum of the Twelve; and retired Supreme Court Justice Sandra Day O’Connor. In turn, the honoree delivers a prepared speech to the law society. 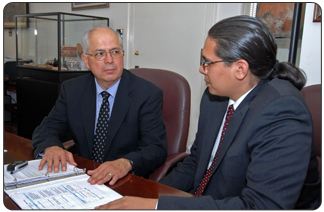 On 25 January 2013, Elder Larry Echo Hawk, former Assistant Secretary for Indian Affairs in the United States Department of the Interior (2009-2012), and now serving as a member of First Quorum of the Seventy of the Church of Jesus Christ (sustained on 31 March 2012), accepted the 2013 Distinguished Service Award.

Elder Echo Hawk converted to the LDS faith as a teenager. His is a unique American success story. Throughout his lifetime, he has simultaneously navigated social circles that are so disparate from one another as to seem mutually exclusive.

“I’ve had a very interesting life,” Elder Echo Hawk told the Deseret News recently. “I’ve done a variety of different things, and it’s always been a work in progress.”

Some of Elder Echo Hawk’s life accomplishments include being a hard-hitting safety for BYU’s football team from 1966-69. As an American Indian who played Division I football, he found himself to be in the minority. He also became the first American Indian to ever win a state office via statewide election. In 1994, after his narrow loss of the Idaho gubernatorial election, he migrated to Provo, Utah where he taught for 14 years at BYU’s law school, becoming the only faculty member to transition straight from elected office to the world of academia.

H. Reese Hansen, retired dean of BYU’s law school, first met Echo Hawk when they both attended the University of Utah’s law school during the early 1970s. He is the one who is responsible for persuading Echo Hawk to give teaching law students a try after his term as Idaho Attorney General ended in early 1995. He recently spoke to the Deseret News about his former classmate’s character.

“I think that you really can’t describe Larry Echo Hawk with only words,” Hansen said. “I think you have to meet him, shake his hand, look into his eye, hear him talk (and) the tone of his voice and the sincerity of what he says — and you’ll know it’s all true. He is absolutely authentic.” [1]

During the course of his remarks to the J. Reuben Clark Law Society at the 25 January 2013 fireside, Elder Echo Hawk emphasized the importance of staying spiritually centered amidst professional flux. He spoke at length about his three years as the federal administrator responsible for the Bureaus of Indian Affairs and Indian Education. He titled his remarks that evening “Instruments in His Hands: Doing this Great and Marvelous Work.” In part he said:

He also made mention that the hiring process to become Assistant Secretary of the Interior for Indian affairs started with an unexpected phone call from the President Barack Obama transition team on 13 January 2009.

“The caller simply said, ‘We have an airline ticket for you, and we want to talk to you in Washington, D.C.,’ ” Elder Echo Hawk recalled. “As I had not had anything to do with Barack Obama’s campaign, and I had not applied for any jobs, this was a complete surprise to me.” [1]

The ensuing in-person interview revealed nothing about the position for which he was being considered. Only after Elder Echo Hawk returned to his hotel that night did Ken Salazar, the nominee for Secretary of the Interior, phone him with the news he was being offered the position of Assistant Secretary of the Interior for Indian affairs. After considering the offer for several days, Elder Echo Hawk accepted, and the Senate unanimously confirmed his nomination on May 19, 2009. [1]

“It was the most difficult job I ever had,” he told the Deseret News. “But it was the most satisfying job that I’ve had because we had the ability to be able to actually do things that were impacting the lives of people. … We have an impressive record of accomplishment in the years that I served — dealing with the settlement of very significant claims against the United States by tribes and individual Indians, restoration of tribal lands, settlement of very significant water rights disputes that have been going on for decades, and building or renovating over 25 schools.” [1]

Elder Echo Hawk had originally planned to remain with the Department of the Interior through the end of President Obama’s first term. However, in early February 2012, he was called to serve in the First Quorum of the Seventy of The Church of Jesus Christ of Latter-day Saints. He was not sustained at General Conference until 31 March 2012, and remained on at his government post until May 2012.

The Echo Hawks moved back to the house in Orem, Utah that they left behind in 2009 but never sold. And due to geographic proximity they now see their six children and 24 grandchildren much more often than they did while living in northern Virginia for three years.