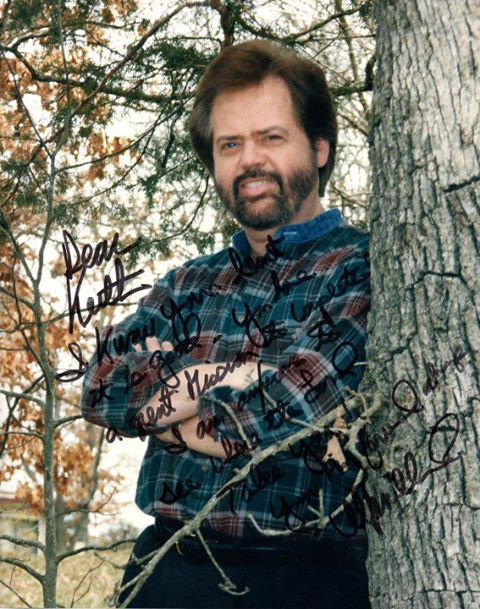 Merrill Davis Osmond was born 30 April 1953 to the late George Virl Osmond Sr. and Olive May (Davis) Osmond, in Ogden, Utah. He is the distinguished lead vocalist and bassist for the world renowned music group known as The Osmonds.

Making Music – Side by Side

Merrill actually got his start in the entertainment business as early as 1958 when along with his brothers Alan, Wayne, and Jay, and the help and encouragement of their father, George, they formed The Osmond Brothers Quartet, and began entertaining local audiences in and around their hometown of Ogden, Utah with their barbershop quartet renditions. In 1958, Alan, the oldest of the group, was 9 years old, Wayne was 7, Merrill was 5, and Jay was 3 years old.

Despite their young ages, George Osmond believed in his sons’ musical abilities, and feeling that their talent and stage presence were strong enough, he took them to audition for Lawrence Welk. Unfortunately, Welk turned them down, but during that same trip they made a stop at Disneyland where they were hired to perform after joining an adult barbershop quartet for some impromptu singing.

While the Osmond Brothers were performing on a televised Disney special, Andy Williams’ father saw them and was so impressed he told his son to book them for his television show. Andy did, and the Osmond Brothers were regulars on NBC’s The Andy Williams’ show from 1962–1969, where they earned the nickname “one-take Osmonds” because of their professionalism and tireless rehearsing. Donny soon joined them on the show, making the Osmond Brothers a 5-member group. Marie and Jimmy were also introduced on the show as the years went by. During this time, the Osmonds also toured Europe, performing with Sweden’s most popular singer, Lars Lönndahl, and even releasing a single (1965) where they sang a Swedish version of “Two dirty little hands” (“Fem smutsiga små fingrar“). [1]

During 1963-1964 the Osmond Brothers appeared in nine episodes of the ABC western television series, The Travels of Jaimie McPheeters, which starred then 12-year-old Kurt Russell as Jaimie McPheeters, with Merrill in the role of young Deuteronomy Kissel. They were also regulars on the Jerry Lewis Show in 1969. During that time they continued to tour and perform with Andy Williams. However, they soon wanted to shed their variety show image and become a rock-and-roll band. Their father, George Osmond, did not take to the idea at first, as he had apprehensions about rock-and-roll music, but soon he was persuaded, and the boys began performing as a pop band. Success was slow at first, but through hard work, determination, and perseverance, they found fame in 1971.

Through the Years – The Blessings of Success

After surpassing 50 years in the entertainment business, Merrill continues to perform on stage with his brothers and his sister, Marie. He is currently substituting for Donny, who is recovering from an injury, by performing on stage with Marie in Donny and Marie’s Las Vegas show. During the show he sings several songs with Marie, but he also gets to perform a few solos.

Through the years, Merrill has also established a name for himself not only as an accomplished solo artist, but also as a writer, producer, motivational speaker, and philanthropist. In his own right, he has received two “People’s Choice Awards”, five number 1 “Billboard Hits”, and two “Grammy Award” nominations.

His remarkable achievements have also earned him notable recognition and honorable titles such as one of the “Ten Outstanding Men,” for the United States Jaycees. Most recently he was honored with a Knighthood by the Military Order of the Temple of Jerusalem in recognition of his philanthropic involvement with religious and charitable organizations. [2]

Merrill is also a co-founder of the Children’s Miracle Network, an international non-profit organization that raises funds for children’s hospitals, medical research and community awareness of children’s health issues. To date, the organization records that it has raised over 4 billion dollars which is distributed among a network of 170 hospitals. The organization was founded in 1982 by the Osmond family and John Schneider, and has its main headquarters in Salt Lake City, Utah.

One event that was special to his heart was, “Operation Family Front,” a special benefit and television program that provided for the families of servicemen in Operation Desert Storm. In the aftermath of the devastating Hurricane Katrina in 2005 Merrill showed his true intentional love for the lives he touches in his work as President of the Morrell Foundation when he accompanied their Quick Response Relief Team to the affected areas providing emergency relief, shelter and support. [2]

At the Rainbow’s End – Where Your Dreams Never Die

In 1976 the Osmond Brothers recorded an album titled Brainstorm. One of the tracks on that album is titled “At the Rainbow’s End”. The words to the chorus of that song are:

But at the rainbow’s end, that’s where I’ve never been.

And though I always try, I can’t fly away.

At the rainbow’s end, you can begin again.

It’s where your dreams will never die.

When I listen to the lyrics of the song, and especially the chorus, I can’t help but imagine if in some, perhaps minute way, the lyrics have some type of deep meaning to Merrill as he sings them. Perhaps in some way, part of his life story is told through the lyrics of that song, and in some metaphorical way he yearns to reach the rainbow’s end where his dreams and aspirations will never die.

Shortly after my mother passed away in June 1997, I took a brief vacation to Branson, Missouri where I met Merrill Osmond, his brothers Alan, Wayne, Jay, and Jimmy, as well as their parents, George and Olive Osmond for the first time. I was blessed not only to see Merrill perform at the Osmond Theater and have him give me a personal backstage tour, but I was honored to be a guest in the home of Mr. and Mrs. Osmond (aka Father and Mother Osmond), where Merrill was living at the time. It was during those times and on brief walks from their home to the theater that I actually had the opportunity to speak with Merrill one-on-one. In my short visits with him, I found him to be a very spiritual as well as a very intellectual person. He is a visionary man and a man of great wisdom and discernment.

During that short visit in Branson I was blessed to be a part of a private audience with Merrill that took place in a room of one of the local hotels. A video was made of that “fireside” chat and you can view part 1 and part 2 online. At the end of that “fireside” Merrill autographed a picture for me and included a brief inscription. The inscription reads, “Dear Keith, I know your heart. It is good. You have a great mission to complete. I am anxious to see where the Lord takes you.” How could he write such an inscription after only knowing me for a short time? He could do so because he is able to see into the hearts of people and discern their goal and mission in life. The picture is one that I will always cherish.

Merrill’s same loving spirit and wisdom shines forth in the books that he has authored and/or co-authored – Let the Reason be Love: A Song of Faith (2003), and his most recent book Faith, Hope & Gravity (2012). In Faith, Hope & Gravity Merrill relates the challenges of being a part of the entertainment world. He co-authored the book with Shirley Bahlmann who turns Merrill’s life story into a parable of sorts.

It starts out as kind of an inviting, unusual, story about the bullies and the bullied who can’t forgive and move on.

But it quickly becomes a mish-mash of strange happenings, adventures and lessons to be learned.

There’s plenty of story. It’s just all mixed up with a thin story about a boy named Liam who is hurt in a cruel prank. He harbors his anger against those who hurt him and uses it to separate himself from the real world.

At the same time, he has a gift for reading the future that both helps him and keeps others from trusting him.

As he finally heads into the outside world, away from his family in Hawaii, he starts to confront some of his fears. He helps strangers, but he trusts no one. [3]

In a recent interview on “The Good Word” Podcast, Merrill and Bahlmann discuss the book. During the course of the interview Merrill was asked: [4]

Q: Outside music, you have spent a good portion of your time with philanthropic efforts and with motivational speaking; a lot of that has to do with helping people find success and happiness. How do you define that success in yourself and in others?

Osmond: Success to me is overcoming. All of us have challenges. I never chose my vocation, never had what you would call a normal childhood, and never really knew what a teenager was because we lived in a bubble. So when the bubble burst and we lost $70 million through embezzlement scams, every one of us had to go out into the world and find what we were as an individual. Overcoming little things here and there caused me to grow into the man I am, and I am hoping that people like me (laughs).

Q: The main character of your story, “Faith, Hope and Gravity,” a character named Liam, is a vehicle to share certain principles. What is Liam’s story?

Osmond: First of all, Liam is me. Names have been changed to protect the innocent, but Liam takes you through a journey. All of the characters inside the story have a lot to do with challenges that I had. I’ve been bullied my whole life, inside the book you will see how those two bullies have become close friends of mine. But the book is hopefully one anyone can relate with in their own specific way.

Let the Reason Be Love

Merrill will attest that his greatest accomplishment in life to date is his family – the love that he has for each of them, and the love that is reciprocated to him by each of them. He comes from a family of nine children, being the fifth oldest, and so family has always been an integral part of his life. He is the first of his performing siblings to marry. He and Mary Carlson were wed on 17 September 1973. Together they are the joyous parents of four sons and two daughters. They are also the grandparents of eleven grandchildren. His second son, Justin, is deaf, as are his two oldest brothers Virl and Tom. Justin works with several organizations and launched the Olive Osmond Perpetual Hearing Fund in 2010.

Merrill Davis Osmond is a devout member of The Church of Jesus Christ of Latter-day Saints (inadvertently referred to as the Mormon Church by the media and others), and he attests that it is his strong religious convictions that have had the greatest impact on his life. In all that he endeavors to do in life, his overarching objective is to let the reason for what he does, be love for his Savior and for his fellowman.