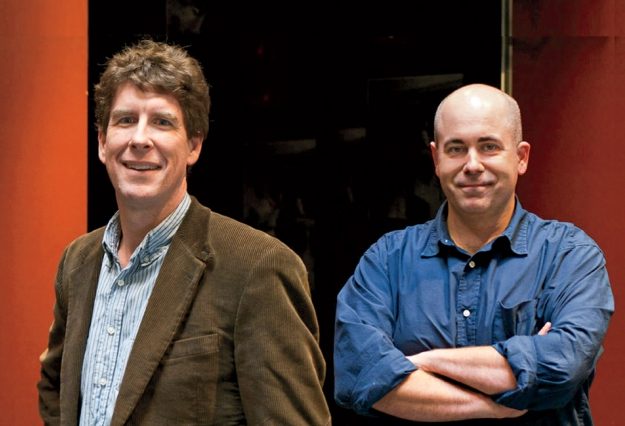 Screenwriters Ken Daurio and Cinco Paul may not be household names, but their movies are—especially if those homes have kids in them. Their family friendly fare includes “The Lorax,” “Despicable Me,” “The Santa Clause 2,” “Hop” and “Horton Hears a Who!” As members of The Church of Jesus Christ of Latter-day Saints, sometimes inadvertently called the Mormon Church, their faith has influenced their work. They said:

Our beliefs have definitely had an impact on our careers, most obviously in the types of projects we’ve chosen to work on. We want to write movies that are uplifting, optimistic and for everybody. [1] 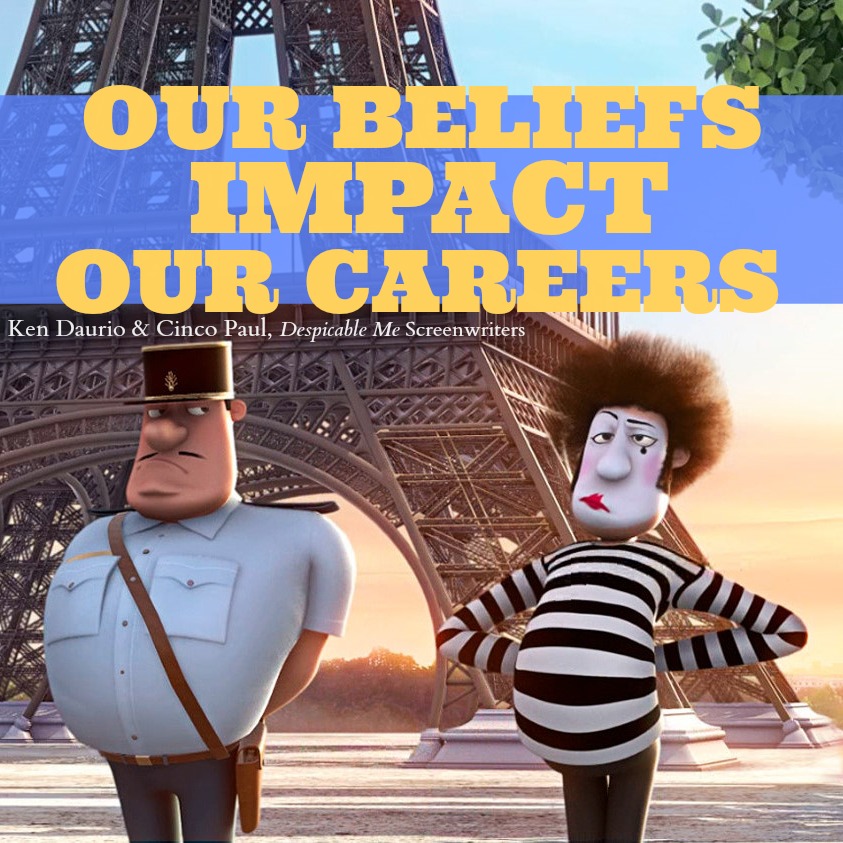 Daurio is a New Jersey native whose family moved to California when he was 8. For his ninth birthday, Daurio was given a Super 8 camera and started making short movies and stop-motion films. He started directing music videos after high school, amassing a résumé of more than 100. [2] Cinco Paul—named for the day of his birth, Cinco de Mayo—graduated from Yale University. Afterward, he won a short-film competition and received a fellowship at the University of Southern California School of Cinematic Art. [1]

Their religion played another role in their careers—they met during a Church production. (In The Church of Jesus Christ, a ward is a congregation; a stake is a group of wards.) Paul wrote a musical for his stake’s sesquicentennial celebration of the Latter-day Saint pioneers’ arrival in Utah, and Daurio played one of the lead roles. They sold their first script within a year, and by the next their second script was made into a movie. [1]

In the beginning they came up with a novel way to pitch their stories—they would sing them. This approach was not always successful. They recall one stone-faced producer who said, “Well, that was loud.” But their tuneful tales worked enough to open some doors of opportunity—including “Bubble Boy” in 2001 and “College Road Trip” in 2008. [3]

Daurio and Paul have their own approach to screenwriting—they are partners, but they prefer to write separately. Daurio said:

… We’ll outline a section of the script and then … divide up the scenes. You know, “Cinco, you do this scene and I’ll do that scene,” and we’ll go away and we’ll go to our separate little desks and we’ll write our scenes, and then we put them together and then we’ll read through it. And the goal is to make the other guy laugh. … And then as we’re reading through, we’ll pitch out things for each other’s scenes and we’ll read them and throw out jokes and things like that. And that’s … where we really put it all together and finalize it. … We kind of separate and write our scenes and come together—and we’re very competitive. [4]

In recent years, they have been writing screenplays for animated, family friendly films. Their strategy, however, is the same. Paul said:

Ken and I just basically write to make each other laugh, and so I guess generally we hope the kids will laugh too and like it. And generally they do, but you never want to write for kids or write down to kids. Kids are human beings with senses of humor, just like everybody. [4]

Daurio agreed that they write their movies for families—not just the kids. He said:

Paul and Daurio are huge fans of Dr. Seuss, whose real name is Theodor Seuss Geisel. And the two Dr. Seuss books they brought to the big screen just happen to be their favorites. In their first Dr. Seuss project— “Horton Hears a Who!”—the pair worked with Audrey Geisel, Dr. Seuss’ widow. She was so happy with their work that she personally chose them for “The Lorax.” [3] Paul said:

The Lorax is a really important book to her; I think it’s her favorite of Ted’s books, and so she really has been very involved in how we’re treating the book. And it’s actually my favorite of Dr. Seuss’ books, and Horton Hears a Who! was Ken’s, so we sort of had our dreams come true. … I think one of the reasons that we have been working with her multiple times now is because we’re all on the same page. We really want to respect these books and we really want to make the best version of that book that we can. [5]

“The Lorax” was their first foray into directing. In working on the project, Daurio and Paul spent much time with Audrey Geisel to create a world as true to the one Dr. Seuss created as possible—especially as they expanded the story to fill a feature-length movie. They even got to go to his house—an experience they both called inspiring. Daurio said, “You’re looking up at the wall and there’s the original tabletop that he drew all these pictures on and wrote the books on. It’s hard to be there as an adult and not get emotional.” [5]

As they worked with Dr. Seuss’ widow, they learned some of the behind-the-scenes stories of the children’s book The Lorax. Daurio said:

I think she was more involved with this book than any other because up until this point, Ted’s books were all done in two colors: red and blue. It was Audrey who pushed him. “Why don’t you expand the color palette? You’ve been working in two colors for so long.” And so that’s why when you look at this book, all of a sudden it takes a jump to now there’s purples and greens and pinks. She was a big part of that happening, and so she feels very connected to this book. As we were showing her images that we were working on, she was always, “Make sure those purples are purples! I worked hard to get those purples in the book!” … She was very involved and we loved everything that she had to say. [5]

In order to expand the storyline of the children’s book, Paul and Daurio had to create more characters. Paul said:

[Audrey Geisel] … had approval over the look of the characters and wanted to make sure they looked like something that Ted would draw, that they looked like they were part of that world…. She did have her one reservation. We named a character after her and she initially had reservations about that because she said, “I don’t want people to think I’m trying to put myself into the movie and everything.” And ultimately she said okay. [5]

In 2007, Chris Meledandri—with whom the duo had previously worked—founded a film production company called Illumination Entertainment, and Daurio and Paul went to work with him. They said:

At our first meeting he pitched the idea of a villain adopting three little girls, and we were immediately hooked. We wrote the first draft in about three months, but it was mercilessly rewritten for the next three years. [1]

Gru, the villain in “Despicable Me,” is voiced by Steve Carrell—an actor with whom Daurio and Paul have worked many times. They both called working with him a joy. Daurio said:

…He’s made so much of what we’ve done better. He goes in there and he’s great because he’ll record the lines as written, and then he’ll have fun with it and expand and experiment. He really brings a lot of great stuff to the movie. [4]

The pair wanted to portray Gru as a villain for whom the audience would root. The writers said that rather than showing him doing anything overtly evil, they showed him doing “just the deliciously evil things all of us wish we could do, like freezing other people in order to avoid long lines.” [1]

Carrell came up with the accent for Gru—which gave the writers more personality for the character. Paul said, “You could start to hear things that [Gru] would say.” [4] They said, “He’s a dad, so he totally gets what we’re doing with the character of Gru.” [1]

As they were making the film, Carrell told them how much his son loved the minions and asked if he could come in and record some minion lines just for fun. “So the next session he was there, proud father, with his son. It was priceless,” they said. [1]

Although movie critics panned the movie, audiences loved it, and Universal Pictures wanted a sequel. “Despicable Me 2” hit theaters around the U.S. on July 3, 2013.

Despite the fun times, working on an animation film is a long process that takes time and patience.

There’s lots of exploration and lots of fine tuning. Because the process of animation just takes so long, there’s always opportunities to rewrite and fine tune everything. But it’s a great process because you really do end up with, hopefully, the best version of everything when the movie’s done. [5]

And the end result is well worth the effort. They said:

Sitting in a theater surrounded by people laughing, then crying, then laughing. There’s nothing better than that. … That’s when you feel you’ve actually succeeded. [1]