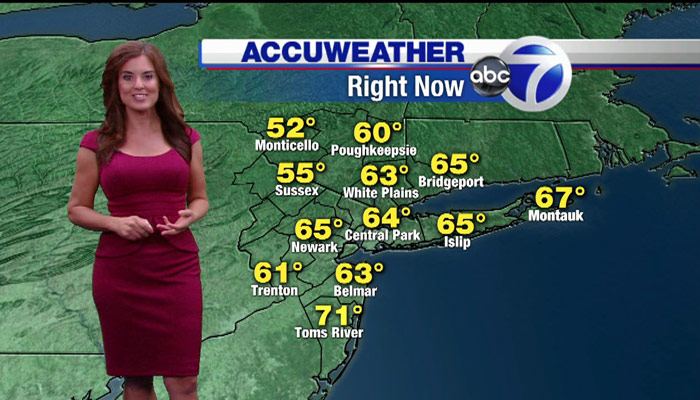 Amy Freeze is the weekend meteorologist at WABC-TV in New York. She was the chief meteorologist for Fox owned-and-operated station WFLD in Chicago from 2007–2011.
Freeze has certificate number 111 from the American Meteorological Society as a Certified Broadcast Meteorologist—she was one of the first 20 women in the world to receive this certification. In addition, Freeze has her National Weather Association and American Meteorological Society Seals of Approval. She is a three-time National Academy of Television Arts and Sciences Emmy Award winner.

Before joining WFLD, she worked for NBC’s WCAU in Philadelphia for four years. During that time she went to the plaza in New York City to fill in for the “Weekend Today Show”. She also worked in Denver at both KWGN and KMGH. She began her broadcasting career in Portland, OR at KPTV. Freeze had a cameo appearance in the “Scrubs” episode My Life in Four Cameras. Freeze uses viewers’ digital photos capturing the weather, including them in her forecasts as “Freeze Frame.” Amy created “The Freeze Factor”- a special segment where she rates the next days weather on a scale of 1 to 10.

During her time in Chicago, Freeze used to visit about 10,000 area students each year giving weather presentations on tornados and severe weather. She hosted the first ever Weather Education Days for MLB’s Chicago White Sox, the Chicago Cubs, and for The Chicago Wolves Hockey team.

Freeze has a website that teaches the reader how to record weather information of his or her own (see External links). Her Master Thesis (from the University of Pennsylvania) is an exclusive concept called the Stormwater Action Alert Program which she created during her research in Philadelphia. She has presented on the topic to many environmental groups.

Freeze is a Latter-day Saint. She met her former husband, Dr. Gary Arbuckle, when she was a cheerleader at Brigham Young University and he was Cosmo the Cougar. She received a degree in communications from BYU and a degree in meteorology from Mississippi State University.

Freeze was mentioned several times during the ESPN Monday Night Football broadcast, December 22, 2008. It was the coldest kickoff ever at Soldier Field for the Chicago Bears.

Freeze moved to New York City in 2011, where she has been the weekend meteorologist at WABC-TV in New York City, New York. She can also be seen on ABC‘s Good Morning America.

Amy Elizabeth Freeze is the name she was born with, she is the oldest of 5 girls, and she was raised by Bill and Linda Freeze in Jeffersonville, Indiana. Wikipedia