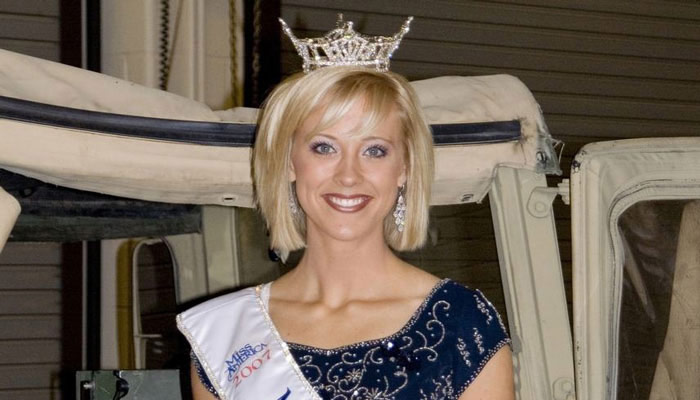 Have you ever seen a beauty pageant contestant drop and give you 20 push-ups in their little black evening dress?Well, probably not until you watched the 2008 Miss America pageant.When Miss Utah Jill Stevens, affectionately known as G.I. Jill, was eliminated from the top 16 finalists, she did just that— and she didn’t do it alone.

Though she didn’t win, Jill Stevens captured a good portion of the hearts of America, and it had very little to do with how well she could strut down a runway in the 4 ½ inch stilettos she nicknamed “the little devils”.She did in fact win the first ever “people’s choice” award during the Miss America pageant.For many, Miss Utah 2007 represents all the best things about women in America, and her personality and enthusiasm for life is contagious.If you spend only a few minutes looking into her life, you walk away inspired by the great things women can accomplish when they set their mind to it.

Middle daughter of five children, and suma cum laude graduate fromUniversity’s 4-year nursing program, Jill Stevens is beautiful, athletic, energetic, and poised, all the things you’d expect from a beauty queen; but, your typical pageant contestant she is not.Just what makes this Mormon girl so special?Sergeant Jill Stevens of the, 1st Battalion, 211th Aviation Regiment, has proudly served in the Utah Army National Guard for the past seven years.She happily admits that until she entered her first pageant in 2006 she didn’t even know where to buy high heels, much less how to walk in them!So, why exactly did Jill put herself in a whole different kind of line of fire?For the same reason she joined the Army: to make a difference in the world and to share her joy and love for her country.

Though many of her Army buddies tried to convince her to use assembling an M16, blindfolded, as her talent, she chose singing.Not surprising since she comes from musical family.Her mother is a member of the famous Mormon Tabernacle Choir.Here’s her take on things:

It’s funny because ever since Soldiers in my unit found out that I won a pageant in 2006 they were always somewhat shocked and then congratulatory. After it sunk in though, they then would ask the question, “So… what on earth is your talent?” Yes, I have to admit, I have come a long way. It was difficult to find a talent for me to do because I didn’t grow up performing and having all that much confidence in my self. Then the challenge of the Miss America Organization came along. I had to break my fear. I have grown up in a family, a musically talented family that is, where I “shied” away from ever thinking I was good enough to sing anything, let alone on my own. Now, here I am, just a few weeks away from singing on “Miss America: Live”. Huh? Talk about a reality check!

I have been working hard on trying to “improve” my voice. I have come a long way and still have lots to learn. I definitely won’t be the most talented up there, that’s for sure, but I am excited to show what talent I do have. It seems very fitting that I am singing a song called, “Shy”.

Jill Stevens is not the first Miss America contestant to trade combat boots for formal wear; she is the first to 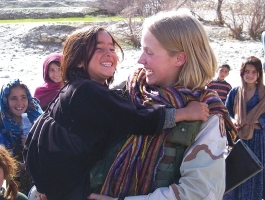 be deployed for active duty in a foreign country.G.I. Jill spent more than a year as a Combat Medic in Afghanistan, where she is now actively working with others to build an orphanage.Jill was not afraid to be herself in any environment, even a less stable foreign company.Where many men in her unit would not venture outside their encampment, Jill crossed the chasm between the two cultures regularly and established some deep connections because she was willing to do so.She speaks often of her high regard for the women of Afghanistan, noting that despite the populations general disregard for women they still show great self-respect and aspirations.

She has been quoted as saying, “It hit me (and) I actually became proud to not only be an American, but an American soldier fighting for these women. …They live in these countries where no one believes in them and they still forge ahead…they still continue on,” Stevens said. “I thought of these women and they have really given me a lot of strength.”

In return, while Jill Stevens was drawing strength from the example her female friends in Afghanistan, women in this country draw strength from Jill.As she has toured the country, speaking on many different platforms, it isn’t at all surprising to find someone walking up to her to say, “Thank you for representing the women in the military, breaking that stereotype, and showing that we are women… women who just want to serve.”

Jill Steven’s life journey has already led her to amazing places, but she is an amazing person.She now also added author to her list of accomplishments by publishing her first book about her own life and the choices women face entitled, “It’s All Good.”  Keep an eye on this Mormon and she’ll keep you on your toes with her winning personality and enthusiasm for life in general.