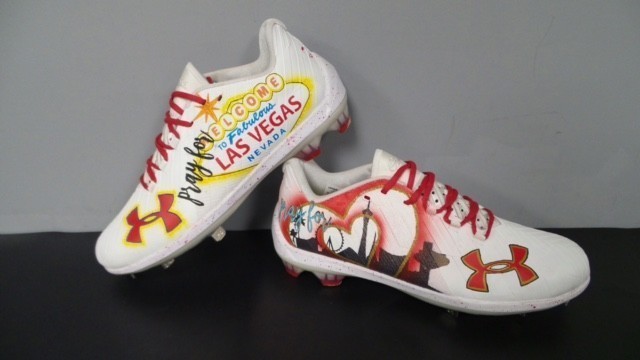 Washington Nationals outfielder and five-time All-star Bryce Harper just hit a 421-foot home run this past Saturday, giving his team a clean victory of 6-3 against the Chicago Cubs.

This is an impressive comeback as Harper only recently got back in the game due to a knee injury.

“He’s just one of those players that can just show up,” outfielder Jayson Werth said. “If he’s got a bat and in the box, he’s never out. He’s always got a chance. Right man, right spot.”

Impressive stuff. You can tell from the video that he’s still a bit in shock about the win. But Bryce Harper isn’t just a star baseball player. He’s a loving son, a husband, and a Mormon from Las Vegas.

Sunday, October 1st, a man shot an incredible hail of bullets into a crowd of 22,000 for 10 minutes, killing 58 and injuring hundreds more during a country music festival in Vegas. In a recent interview with USA Today, Harper said on the shooting, “It’s an unbelievable thing to happen. You never want that to happen to anybody across the world. For it to happen in your hometown, it definitely hits home.”

Bryce Harper responded to the tragedy with this:

Vegas this is for you!💯 #VegasStrong pic.twitter.com/QujvvVOMc6

Harper wore these customized cleats (made by Under Armour and designed by SolesBySir) to his Friday game as a tribute the valuable lives lost in the recent mass shooting. The cleats sport the “Welcome to Fabulous Las Vegas, Nevada” logo, with the words “pray for” in front of the sign on one shoe. A heart and a skyline of the city with the words “pray for” are on the other shoe.

As a Las Vegas native, his thoughts and prayers go out to those affected.

Remember Vegas in your prayers.