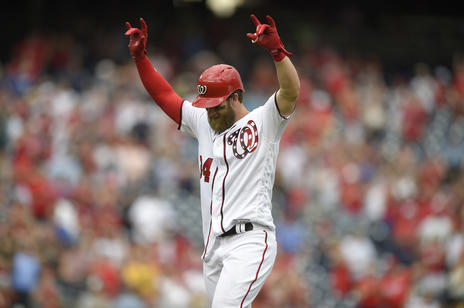 On May 10th, 2017, ESPN posted a video on YouTube of Bryce Harper sharing a letter he wrote to his mother, just in time for Mother’s Day. In that video, Bryce says of his mother, “You showed me how to care, be humble, treat others with respect and to always remember who I am.”

Bryce reads his letter in front of a bunch of cameras. But what he does not know is that his mother is actually watching him on a screen as he reads the letter. At the end of the video, she surprises him by coming out to give him a hug.

Many viewers used to think that Bryce’s ‘I love you’ sign was meant for the Nationals’ fans. However, during his video for his mom, Bryce reveals the real reason why he makes the “I love you” sign every time he makes a home run. He starts by sharing one of his most cherished memories of her. He recounts, “One day you dropped me off at Aunt Theresa’s and for some reason I jumped out of the car very quickly. As I hurried away, I forgot to give you my regular kiss on the cheek. You yelled, ‘Bryce! Bryce!’ As I spun around, you flashed the universal sign for ‘I love you.’ I will never forget that day. So of course, every time I cross home plate after a home run, I make sure you know I love you, too. Sorry Nationals fans, that’s not for you.”

Bryce’s tender relationship with his mother is obvious by the way both of them get very emotional as he reads his handwritten letter. It is clear that Bryce’s words really come from the heart and that he is a little bit hesitant to share his personal feelings on camera.

The way that Bryce feels about his mother reflects his Mormon values. As a Mormon, he believes that families are central to God’s plan for us and that we can be with our families for eternity, even after this life. That is why Mormons especially work to cultivate strong relationships with their family members. The role of being a mother is especially valued and respected by Mormons because of their extremely important role of loving, teaching, and raising the children God sends to them. What would the world be like without good mothers?

Below is ESPN’s video of Bryce’s heartfelt letter of gratitude to his mom.

Jeremy Guthrie is called as a Mission President to Texas.