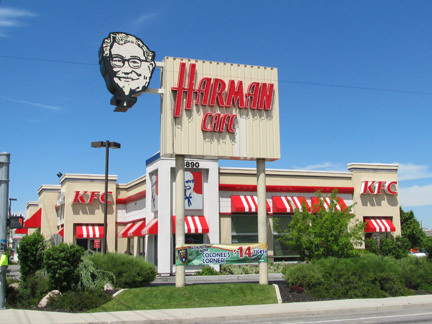 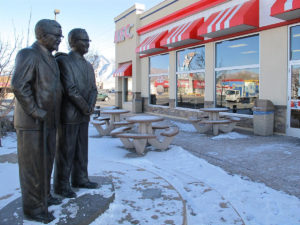 Leon Weston “Pete” Harman’s story is perhaps familiar to many people. Harman was the youngest of 14 children in a Latter-day Saint family. He and Colonel Harland Sanders struck up a deal and opened Harman’s Cafe, which became one of the first known fast food restaurants. Later, the business duo started the first Kentucky Fried Chicken (KFC) franchise. Pete’s claims to fame are the development of the bucket packaging and the emphasis on the “Finger-lickin’ good” motto. The franchise was located in Salt Lake City, Utah, and opened for business in August 1952.

However, Pete Harman’s origins actually began with a lesser known person by the name of Caroline Hemenway Harman, or Aunt Carrie, as she was known in the community and by Pete. Caroline was actually Pete’s step-mother, as she was the widow of his uncle. Pete’s mother died two days after he was born, and his father later married Caroline. It was the way Aunt Carrie cooked chicken that helped inspire Pete to begin Harman’s Cafe.

Caroline lived an exemplary life of service and self-reliance and a building (Caroline Hemenway Harman Continuing Education Building) on the campus of Brigham Young University (BYU) in Provo, Utah, bears her name. The building was originally dedicated on 13 April 1982 by President Gordon B. Hinckley and “reflects the often unsung monumental impact this woman had on her family and community.” The original construction of the Harman building was made possible by Pete Harman. At the rededication, Elder Soares quoted Pete, saying, “She did more for people than anybody I know. … Aunt Carrie asked little of life. She gave much. This new building is my way of showing my gratitude and love for her.” Elder Soares further commented, “Future generations of students will be benefited not only by the well-equipped facility but also inspired by the history of love and sacrifice [Caroline] Harman was known for.” 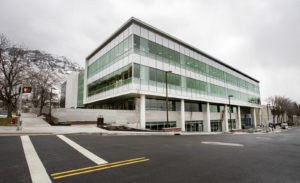 Reflecting on the life of Caroline Hemenway Harman, Elder Ulisses Soares of the Quorum of the Twelve Apostles of The Church of Jesus Christ of Latter-day Saints (often mistakenly referred to as the “Mormon Church”), commented, “As I read about her and learned about the type of life she lived, I was truly impressed by the Christlike attributes this wonderful woman held. The records written by people who were related to her indicate that she was courageous, intelligent, very kind, full of charity and love and goodness, and would bring sunshine everywhere she went and would always stand up for the weak and the unfortunate.”

On 5 February 2019, at the rededication of the Caroline Hemenway Harman Continuing Education Building, BYU President, Kevin J. Worthen, who described Caroline as “unsung, resourceful, and hard-working,” made the following remarks:

She saw much adversity in her day, while also serving others without complaint. She was a widow three times over, raised 14 children (including her sister’s children after she died), and suffered from sugar diabetes, all while taking responsibility for a 300-acre farm as well as serving as Relief Society president for 18 years.

After most of her children had married, Caroline Harman continued to be productive. She began a chicken farm that soon had 1,000 chickens. As one biographer put it, “Aunt Carrie expected everything around her to be productive, and she would not have a lazy chicken. A hen who lacked commitment was invited for Sunday dinner.