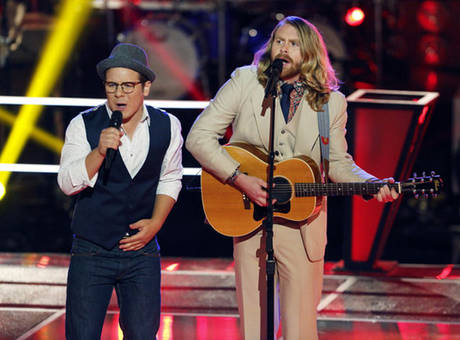 Elimination from NBC’s “The Voice” isn’t the end of the road for Ryan Innes, Jon Peter Lewis, Ryan Hayes and Amy Whitcomb—all members of The Church of Jesus Christ of Latter-day Saints, sometimes inadvertently called the Mormon Church—it’s just the beginning, according to their tweets on NBC.com. All four made it to the finals round of the reality competition before being knocked out in the same week, according to NBC.com.

“Friends, thank you for all the support and Whale wishes. Now lift your hearts because the journey has just begun,” Midas Whale—the duo of Lewis and Hayes—tweeted, according to NBC.com.

Innes tweeted, according to NBC.com: “So much love for everyone, everywhere for your support. This was never about an ending. Just a beginning and I’m ready. Hope you are too.”

Midas Whale and Whitcomb were part of Team Adam (Adam Levine is the lead singer of Maroon 5). Innes was on Team Usher (the famous R&B singer-songwriter).

For those who are unfamiliar with “The Voice,” it is an American reality singing competition, according to Wikipedia. The show begins with blind auditions, where the “teams” are chosen. The four team coaches are Levine, Usher, Latin singer-songwriter Shakira and country singer Blake Shelton. The battle and knockout rounds of the show whittle the number of contestants down for the live shows, according to Wikipedia. “In the final live performance phase of the competition, contestants perform in weekly shows, where public voting narrows to a final group of contestants and eventually declares a winner.”

Lewis, Hayes and Innes have all served missions for The Church of Jesus Christ, according to an April 24, 2013, Deseret News article titled “4 Mormon contestants advance on ‘The Voice.'” “Innes served an LDS mission to Portugal, Lewis in Spain and Hayes served in Ecuador,” according to the article. “Lewis and Hayes even showed off their Spanish to Shakira during their audition, explaining that they both knew the language from living in Spanish-speaking countries.”

Innes’ Journey: From Med School to Music and ‘The Voice’

Innes said one of the highlights of his experience on “The Voice” was performing with Orlando Dixon, the contestant he beat out to advance to the finals round, according to the Deseret News article “4 Mormon contestants advance on ‘The Voice.’”

“I think he and I were on the same page of just wanting to not get caught up in the competitiveness because that would just destroy both of us,” Innes said in the article. “We kind of had an immediate connection as musicians and friends and as performers, wanting to create a really cool moment to experience for ourselves. … I think it will definitely be one of the highlights for me during the journey on the show.”

Innes’ road to music began with the study of medicine—he was planning to become a pediatrician and even received an associates degree from Eastern Arizona College in pre-medical science, according to a 2010 Deseret News article titled “Ryan Innes: From med school to the music industry.” But he changed course after a broken engagement three weeks before the wedding, according to the article. He realized, according to the article, that he didn’t have a passion for medicine. That’s when he found the music program at Brigham Young University (also known as BYU, which is owned by The Church of Jesus Christ and is in Provo, Utah.)

“…Through a friend, I discovered the media music program at BYU and realized that was exactly what I wanted to do. I applied to BYU and got in. I auditioned and made it into the school of music. …The doors opened up and I was on my way to BYU to study songwriting and contemporary voice—neither of which I’d ever done before,” he said in the 2010 article.

Innes says the confidence and courage he gained in BYU’s a cappella group Vocal Point helped him make the decision to be an artist, according to an April 10, 2013, Deseret News article titled “2 former BYU singers appear on ‘The Voice.'”

“Vocal Point gave me the first real opportunity to be a soloist. I had always been in the background in the choir or something like that. I really got a chance to find a voice that I didn’t know I had.”

The judges have recognized Midas Whale—the duo from Rexburg, Idaho— “as being different and unique,” according to the April 24, 2013, Deseret News article “4 Mormon Contestants Advance.” But one member of the duo has another claim to fame—Lewis was a finalist on “American Idol” in 2004 known as JPL, according to the article. Lewis and Hayes teamed up after meeting at an open mic night and auditioned for “The Voice.”

Although “The Voice” is a competition, “Lewis and Hayes both said they like to just focus on creating good music.”

“It’s easy to get caught up in a competition, to become competitive and lose sight of creating a musical experience for the audience,” Lewis said in the article. “I think the challenge of the battle round is to create something that isn’t necessarily one person trying to defeat the other, but trying to create something really beautiful for people to watch.”

Whitcomb, who sang with Brigham Young University’s a cappella group Noteworthy, also credits her alma mater for helping her as a musician, according to the April 24, 2013, Deseret News article “2 former BYU singers appear on ‘The Voice.’”

“Honestly, singing with Noteworthy in college at BYU was the first real consistent outlet for performance that I had, and I think that it helped build me a lot as a musician,” Whitcomb said in the article. “I started to realize how much I love singing and the kind of genres that I could tap into. It helped me really start to find my voice even though I was singing in the group.”

Whitcomb, who is a music teacher in Orem, Utah—the town adjacent to Provo—said that the community has been very supportive.

“For me, the Orem and Provo, Utah, communities have just wrapped their arms around me as a vocalist and a vocal teacher. Utah, Provo and Orem in particular, they know talent and they want to make sure they showcase it. They’re so good at promoting local artists. …Without that community backing me, this wouldn’t be the same experience,” she said in the article.

Whitcomb is also a veteran of reality TV—she was part of the all-female group “Delilah” on NBC’s a cappella singing competition show “The Sing-Off.”