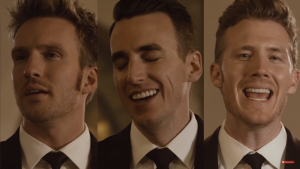 GENTRI keeps things simple and focuses on the music with their cover of “Let It Be.”

GENTRI, the popular LDS tenor trio, released a new music video covering The Beatles’ famous “Let It Be.” Their version is a more classical, polished take on the classic song that features the gentlemen in suits, singing in a church to the simple accompaniment of a piano.

The beginning of the video introduces the origins of the song for those who may not be familiar with it. Paul McCartney’s mother passed away when he was just 14 years old. Years later when writing the song, McCartney was thinking about his mother, Mary. In the song, his mother comes to him in a dream with the wise words “let it be.” The words helped him relax and not worry about his own troubles and problems so much.

GENTRI evokes the special meaning behind the song with their simple, harmonic arrangement. As usual, 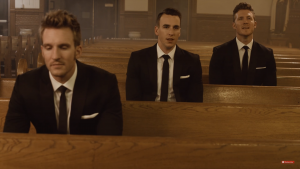 The “cinematic pop” tri, GENTRI, covers The Beatles’ “Let It Be” in a classical way with piano accompaniment and no choreography.

the trio’s voices blend together beautifully and bring a layer of depth to the simple lyrics. They eliminate distractions from fancy graphics or choreography and keep the focus on the music and the harmony between their voices. The piano accompanying them is the perfect addition the slower and classical take on one of the most famous pop songs of all time.

The three gentlemen, Brad Robbins, Casey Elliott, and Bradley Quinn Lever formed GENTRI in 2014 and have gained a solid fan base with their signature “cinematic pop” sound. They have performed with world-famous talent like Alfie Boe and Idina Menzel, and their popularity only continues to rise. GENTRI’s simple, classic and harmonic cover of “Let It Be” is sure to please fans and perhaps attract a few new ones.