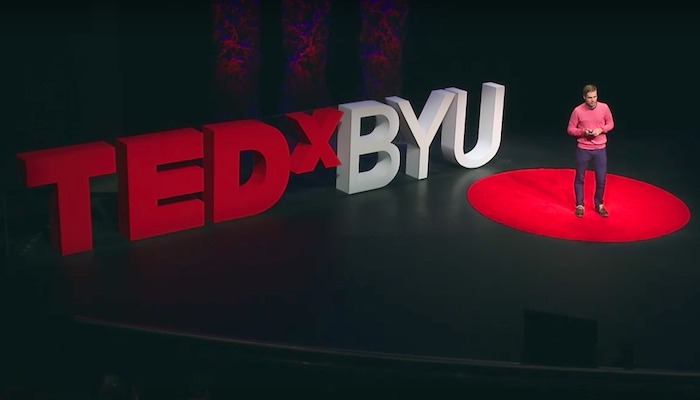 We just wrote about James Perry’s awesome new vlog, and it seems he’s been up to more than just vlogging—he recently gave a Ted Talk called, “How I Stumbled on a Purpose.”

Just as a reminder, James Perry is a member of the Studio C cast, a comedy group dedicated to making funny videos on YouTube. He is also a member of The Church of Jesus Christ of Latter-day Saints. James is best known for his ability to create humorous, original characters for Studio C sketches. Since we are so used to watching him act silly, it’s fascinating to watch him give a serious Ted Talk for TedxBYU. 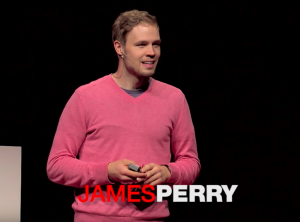 During his speech, James admits that he has always been jealous of people who seem to know exactly what they wanted to do with their lives since they were children. He has noticed that many successful people chose something that they wanted to do with their lives and then worked towards it consistently. Unfortunately, James has always struggled to decide on just one thing to work towards. Motivational quotes like, “Get up off the couch,” “Stop being lazy,” or “You have as many hours in a day as Beyonce,” have only made him feel worse because he already puts a lot of pressure on himself. Personally, he feels more inspired by quotes like, “Whoever you are, you’re good enough,” or, “If you swing and miss, God always pitches again.” His favorite proverb is, “Whatever you’re doing right now, you’re not murdering puppies.”

While attending BYU, James switched his from landscape management to philosophy to mathematics to journalism, and finally, to mechanical engineering. He settled on mechanical engineering because he thought it was a good mix between math and science, two subjects he enjoyed, and also because he felt it was a great way to contribute to the world, giving him a sense of purpose. However, mechanical engineering was a very difficult major, so he joined a comedy club called Divine Comedy which later evolved into Studio C as a creative outlet, something he did on the side.

As Studio C began to become more successful, they asked James if he would be willing to go full-time. James obviously accepted the opportunity to do something that he loved, but he was worried that it wouldn’t be as “important” or as “purposeful” for the world as a career in mechanical engineering would be. However, the letters he received from fans changed his mindset. “I realized that I had more purpose and was actually more useful by doing something that was important to me instead of doing something that I assumed was important to the people that I wanted to help.”

Near the end of his Ted Talk, James shares three tips for “Finding your Purpose.”

You have a lot of purposes throughout your life, some of them long term, some of the short term. No one has only one purpose. “If you’re aware of the opportunities that you have and you’re true to yourself, it turns out you’re not wasting time … by doing what you love. Go out, make mistakes, and waste some time. But you have to know, what is it that you love? And who are you?”

He goes on to say, “You don’t just say, ‘What are my strengths?’ but instead, ‘What do I want my strengths to be?’ based on the things that you love.”

Click below to see the full talk. It’s worth the watch.