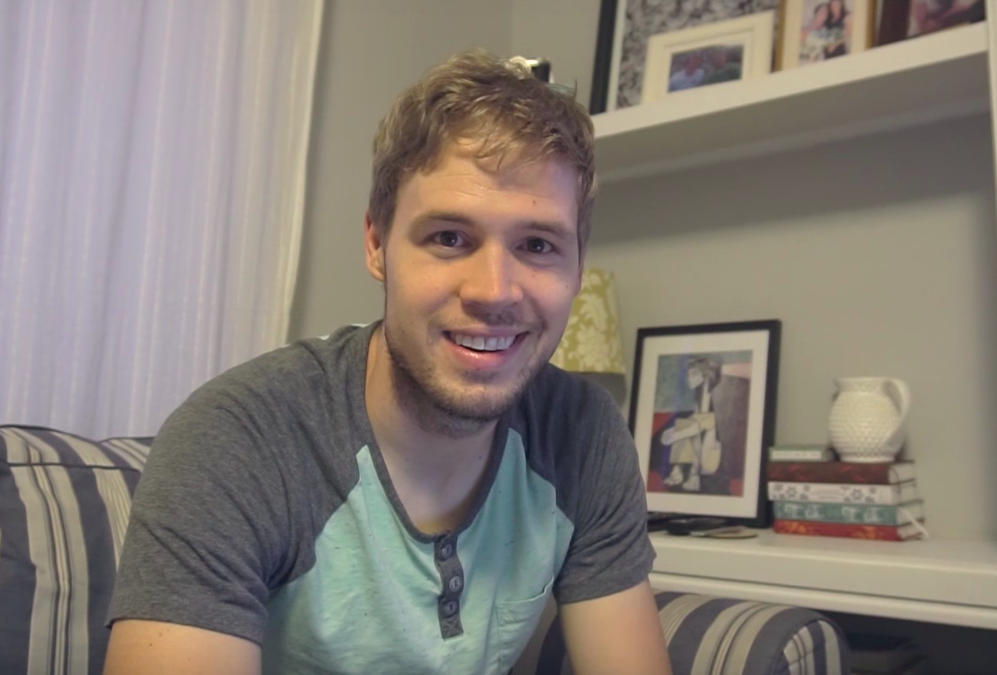 James Perry is a member Studio C. Most of you have probably heard of them. If you are drawing a blank, here’s a hint: Scott Sterling. Do you remember the viral YouTube video where soccer goalie Scott Sterling keeps getting hit in the head by a soccer ball? If not, here’s the link:  https://youtu.be/8F9jXYOH2c0.

Today, we are highlighting James Perry, a member of the Studio C team who is best known for coming up with creative, comical characters for sketches. Here’s one of the sketches he wrote that gained over one million views where a quirky janitor tries to play matchmaker for two students who are studying chemistry together. James came up with the idea, and he plays the janitor. It’s worth the watch! (If you like the video, don’t forget to subscribe to Studio C.)

Now that you have a rough idea of who James Perry is (if you didn’t already), let’s talk about his vlog. That’s right—James Perry just started his very own vlog! His very first video was posted about a month ago on April 29th, 2017 where he explains that his “vlaaargs” will be similar to dad jokes—funny because they’re corny. At least, I think that’s what he meant. You can watch his first vlaaarg below to see for yourself. (You’ll have to excuse his wife. She’s shy.)

Later, James posted a video where he and Stacey Harkey—another Studio C cast member—read comments from fans and then made songs out of them. It was pretty entertaining, actually.

At the beginning of this month, James made a goal to make a video every day throughout the month of June to share what it’s like to be a Studio C cast member. His first June video is below.

James’ second June video was of him working out with Stacey Harkey. It starts out with a pretty terrible Dad joke. It’s good to know that James is delivering on his promises. He also makes some pretty hilarious faces when he’s lifting.

My favorite video that he’s posted so far is actually the “Sunday Hang Out” where he responds to random comments that people have made on his videos. Why is it my favorite, you ask? Well, why don’t you watch it to find out?

… Alright, I’ll just tell you. It just cracked me up. People’s vlogs usually bore me to death, which is why I hardly ever watch vlogs, but James actually makes me laugh. It’s partly because of his unexpected responses, and partly because of his facial expressions. One of my favorite parts of his “Sunday Hang Out” is when he tells people what breed of dog he has.

The “Sunday Hang Out” also references James’ beliefs. As a member of The Church of Jesus Christ of Latter-day Saints, James believes in keeping the Sabbath Day holy, meaning that he goes to church, doesn’t work (hence his low-key video for Sunday), and studies the teachings of Jesus Christ so that he’s spiritually fired up for the upcoming week.

James also posted a funny vlog where he also shared some of his beliefs about God and faith in an entertaining way. He references the Bible verse Matthew 17:20 in his video.

Other cast members of Studio C, Jason Grey and Jeremy Warner, also have vlogs. Click their names to check out their channels.