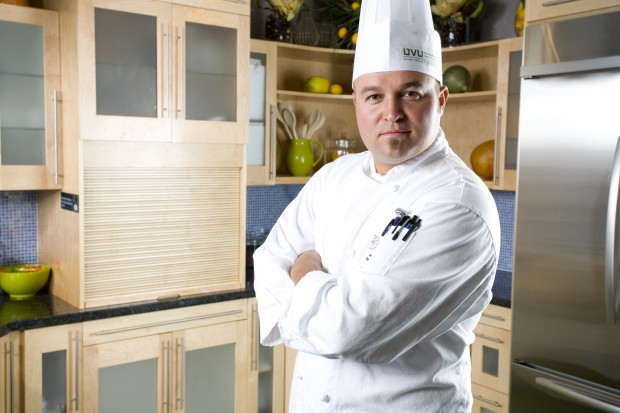 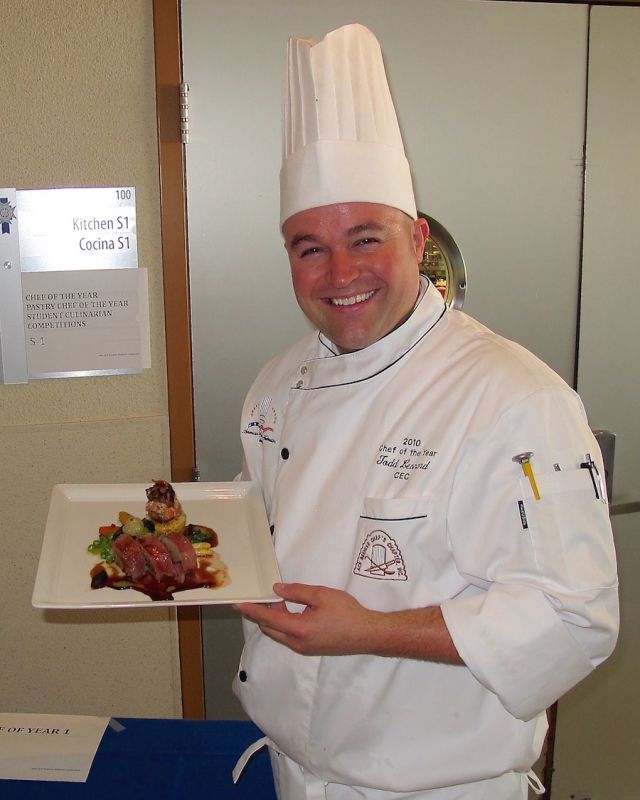 Chef Todd Leonard is a member of The Church of Jesus Christ of Latter-day Saints (often mistakenly referred to as the “Mormon Church”). He served a full-time mission for the Church in Ohio. None of his mission companions would have ever guessed that the guy whose go-to evening meal for probably half of his mission consisted of out-of-the-box macaroni and cheese mixed with boiling water and salsa — hold the butter and the milk, would one day become a national cooking champ. He told the Church News, “I was just trying to survive and get the Lord’s work done.”

Last summer, Leonard, at the age of 42, became the first known Latter-day Saint to claim the national cooking title when he was named the 2018 National Chef of the Year at the American Culinary Federation national convention in New Orleans. He said, “To me, it’s the most prestigious award in our country for chefs; it’s a big honor.”

So, the question that begs an answer is, “How did a native of Cotton Heights, Utah, who was raised far from international food hubs such as New York City or San Francisco, become one of America’s premier chefs?” The short answer is that it all started with Scouting. He told the Church News, “I was working on my cooking merit badge as an 11-year-old Scout,” he said. “I was on a campout with my parents and had to make a breakfast with a mess kit.”

His scrambled eggs were a hit and his cooking career began to take shape. He landed his first job in a Salt Lake-area restaurant, working as a busboy. A couple of years later he was promoted to the kitchen. Prior to serving his mission, he was a cook at several restaurants, learning as much as he could about the culinary cutlery that chefs use, as well as, spatulas and strainers. During his mission, he cooked a few times for investigators and occasionally helped at ward parties. However, the primary purpose of his mission was to help bring souls unto Christ.

When he returned home from his mission, he completed his culinary education at Salt Lake Community College. He also married and started a family. He and his wife, Michelle, are the parents of four progeny. They are members of the River View 9th Ward, Draper Utah River View Stake.

His professional career and testimony of the gospel led him to a chef’s position at the Joseph Smith Memorial Building in Salt Lake City, Utah. His duties for eight years included overseeing the Garden Restaurant and opening the Nauvoo Café. The Church news reports that one of his frequent and high honors was preparing a meal or perhaps a specialty milkshake for a General Authority. One Church leader stopped by the kitchen once to personally thank Leonard for the meal that he had prepared for him, saying, “That was a noble piece of prime rib.” Leonard said that of course, he had cut the Church leader’s piece a little thicker.  He also said, “I loved working for the Church in that capacity. I fed a lot of good people.”

Twelve years ago, Leonard accepted a teaching job at Utah Valley University, where he now chairs the Culinary Arts department. Although he enjoys sharing his cooking prowess with his students, Leonard admits that he also has a competitive streak. Several years ago, he was a spectator at the National Chef of the Year contest and knew that he wanted to try for the title.

Seven years ago, after claiming the western regional top chef’s title, he got his first shot at the National Chef of the Year competition. However, his preparation was interrupted by a stake pioneer trek, having accepted a call to cook for the trek prior to qualifying for the national competition. He had initially asked to be released from the calling, so he could focus on the competition, but felt in his heart that he was supposed to be on the trek. So, as his competitors were making final preparations for the national competition, Leonard was cooking up meals for hundreds of hungry, trail-worn youth, and undoubtedly, setting an impossibly high menu standard for all future pioneer treks. He told the Church News, “We weren’t eating Johnnycakes.” 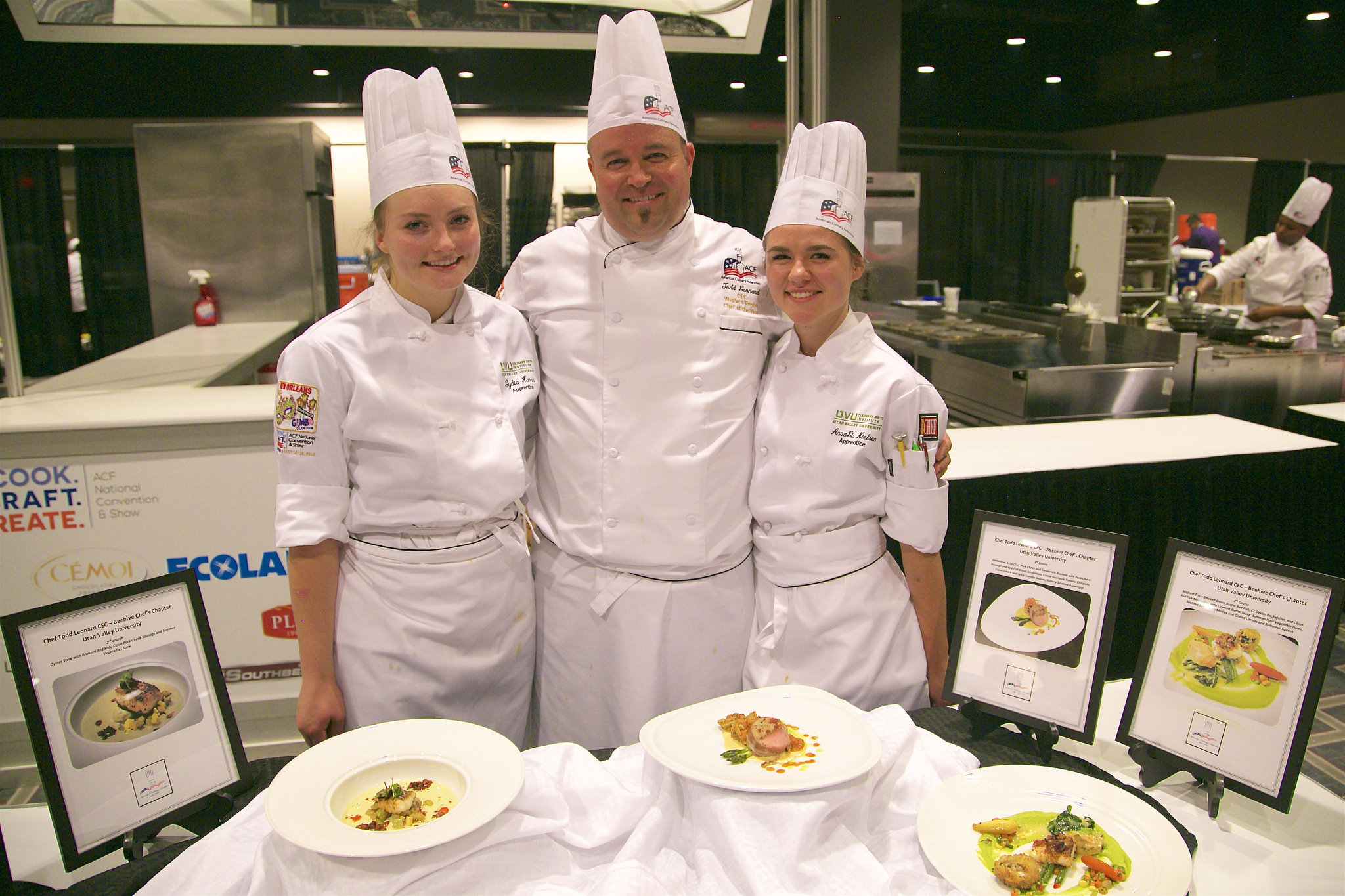 He traveled directly from trek to the airport and on to the national competition. He lost but vowed that one day he would return and claim the top chef title. His opportunity came earlier this year when he once again won the western regional championship and secured a spot for the New Orleans convention. He and his four competitors, all regional champions, each had 90 minutes to prepare a four-course meal to be judged by fellow master chefs on taste, presentation, and sanitation. He was assisted by two student apprentices, AnnaLis Nielsen, and Lydia Harris.

Harris commented, “Working with Chef Todd has been one of the best experiences of my life.” She will soon trade her “Toque Blanche” (kitchen-speak for chef’s hat) for a missionary name tag as she will be serving in the Washington Vancouver Mission. She continued, “He is such a good mentor, and I appreciate the knowledge I have gained as a chef. He has helped me understand the importance of cooking with your heart and truly finding joy in it.”

Leonard prepared a menu comprised of 23 ingredients, using three required proteins — pork cheek, oysters and redfish. He and his two apprentices who offered skilled assistance practiced 16 run-throughs prior to the competition and had everything memorized. His father also gave him a priesthood blessing prior to the event, which provided him spiritual peace. And, his wife, Michelle, was at his side when he was announced as the winning chef. He further commented, “Cooking is awesome. Food remains a tradition that can bring families together and make a difference in our lives.”