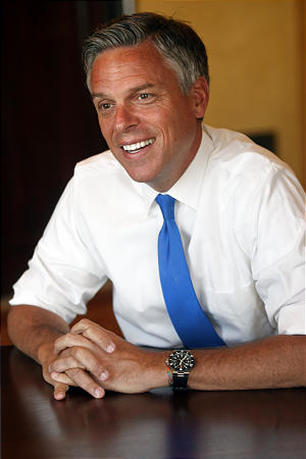 Mormon Jon Huntsman Jr. dropped out of the 2012 presidential race fairly early, something he seemed to expect.  He had departed his post as U.S. Ambassador to China in order to run for the presidency, but he was only getting his feet wet, getting his name out to prepare for future prospects.  Now that the election is over (the beginning days of 2013) his name is coming to the forefront as a possible candidate for Secretary of State, and his advice is being sought by an introspective Republican Party.

The Republican Party, during the presidential campaign, had stuck by its historical principles in upholding traditional marriage, standing against abortion, supporting small government and states’ powers, taking a strong stance against illegal immigration.  The party lost most of the Latino vote, even though the Catholic Church had urged a vote for morality.  Huntsman joined others in stating that there is no way Republicans can take back the presidency in the future.  Reasons include a more liberal youth joining the pool of voters (who tend to be pro-gay marriage), people who want social benefits and don’t mind a socialistic bent, and minorities who want immigration reform in their favor.

Digital Journal quoted the Daily Telegraph in citing Huntsman’s criticisms of the party.

“We can’t be known as a party that’s fear-based and doesn’t believe in math. In the end it will come down to a party that believes in opportunity for all our people, economic competitiveness and a strong dose of libertarianism.”

Huntsman also criticized Republicans’ unwillingness to compromise with Democrats even when it is in the interest of the country, its unwillingness to evolve in its tenets, and its “fear mongering” during the campaign.  He said the party needs to regroup and redefine itself.  He commented on the bad tactics of the early nomination process wherein Republicans favored far right-wing candidates rather than those who really had the ability and talent to lead the government and work with Democrats in Washington.

Conservatives are now a shrinking portion of the U.S. electorate, and perhaps this opens the door for more moderate candidates.  Mormon Mitt Romney is at heart a moderate, but he had to hide his moderate side in order to win the nomination.   Jon Huntsman is up-front moderate, and now perhaps, he can show his stripes without fear from Republicans.

Huntsman said that the fact that he had worked for Obama, his belief in climate change and his liberal attitudes towards gay rights worked against him, drawing attention away from his conservative position on key issues such fiscal policy, gun control and abortion. He said: “You get caught up in a lot of the issues on which you’re easily dismissed without people giving you proper consideration….The one thing that is as sure as the sun rising tomorrow is that the Democrats will become lazy and they will take their [eye] off the ball. We will see more crony capitalism in Washington as the state grows and that’s the kind of thing Americans hate”  (Digital Journal).

Mormon Jon Huntsman has not yet committed to a 2016 presidential run, but he is gaining recognition and appreciation from both Democrats and Republicans, a man who can work with both.