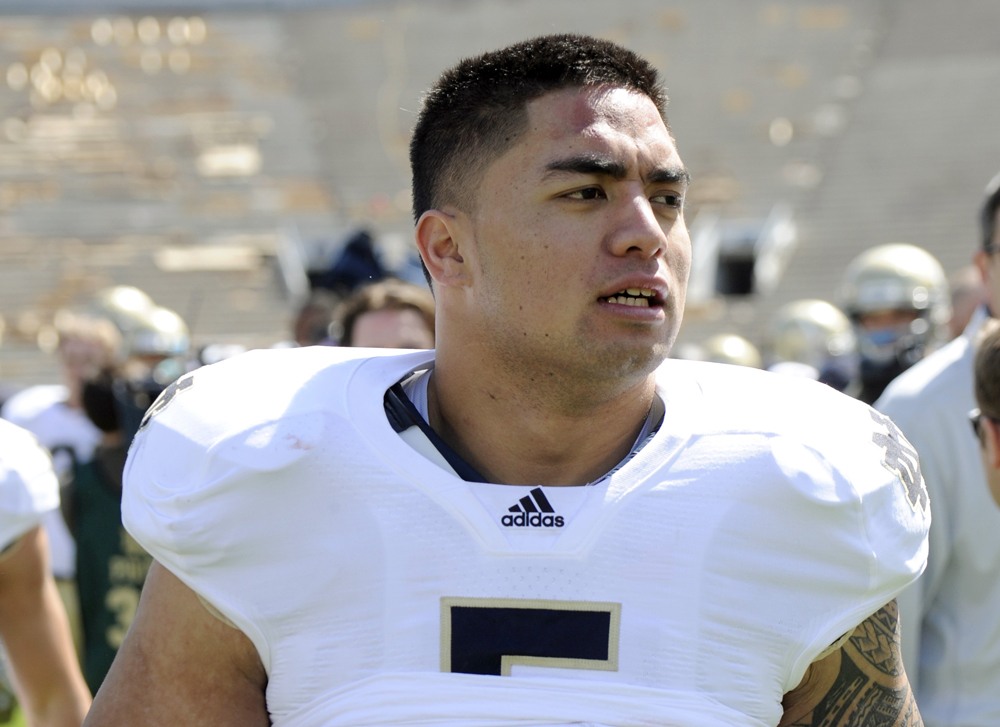 Manti Malietau Louis Te’o is an American collegiate football player, and a linebacker at the University of Notre Dame. He has been the center of much media attention of late after a breaking news story emerged that his girlfriend who had supposedly died of Leukemia on the same day as his beloved maternal grandmother, Annette Santiago, was all a hoax. Once the story made the headlines of major news sources, many people begun questioning Te’os integrity. Many questions seem to be left unanswered, and there are some that feel that Te’o was not merely a victim of the hoax, but that he himself played a major part in getting people to believe that his story was and is true.

Te’o is also a member of The Church of Jesus Christ of Latter-day Saints, and there are people such as his Bishop, Jim Carrier, who have a moral and spiritual responsibility to advise and counsel with Te’o concerning this matter.

Carrier became an LDS bishop in August of 2010. His ward (the Catholic equivalent of a parish) includes a congregation of 350 people, more than half of them Notre Dame students and the vast majority of the latter group graduate students. As much as he has dealt with the absurd in the past month, he stated that he was still blind-sided by a recent interview request from People magazine.

However, as one of the former Notre Dame football star’s closest confidantes over the past nine months, Carrier felt that he needed to come forward with what he knew about Te’o’s relationship with a woman who claimed to be Lennay Kekua. It is because Kekua’s death from leukemia on 12 September 2012 turned out to be fake that Deadspin.com originally suggested Te’o as being complicit in the hoax. As a result, Te’o has not only dominated sports headlines, but his story has bled into places like Access Hollywood, TMZ, Inside Edition and People.

Among the details the 60-year-old Bishop of the Notre Dame Ward of the Church of Jesus Christ of Latter-Day Saints shared was that he, himself, talked to the person purporting to be Te’o’s girlfriend many times on the telephone, and that he was the first person Te’o confided in once the alleged con was revived in December. He also stated that he is confident Te’o will one day put this chapter behind him, but unfortunately the rest of the world probably won’t be able to.

“I talked to Manti on the phone on Saturday,” said Carrier of the All-America linebacker, currently training at the IMG Compound in Bradenton, Fla., for next month’s NFL Scouting Combine.

Te’o and his parents, Brian and Ottilia, agreed to tape a television interview for Katie Couric’s syndicated talk show. And, the uncle of the alleged mastermind of the hoax said his nephew, Ronaiah Tuiasosopo, would probably speak publicly as well.

It appears that the level of detail in the alleged con included the person pretending to be Kekua getting to know Carrier. Throughout all but a few days in which Carrier talked to Kekua, she was allegedly in the hospital, first because of a car accident, then leukemia. She also purportedly had a brain tumor.

“I talked to Lennay many times,” Carrier said. “Many times. On the phone. I would go over to (Te’o’s) house, and he’d say ‘Hey Lennay, Bishop’s here. Do you want to talk to him?’

“And I’d get on the phone and say, ‘Hey Lennay, how are you doing?’ How’s your leukemia going? How’s your treatment?’ Many times. As his roommates did. As others did. If anybody was over there, (Te’o) would kind of say, ‘Hey, you want to talk to Lennay?’

“She was real, and that’s what’s so crazy about this. And so he talked to her every night. Every night. And he developed clearly a very emotional, a very tender relationship with that. I don’t talk to my wife as much as he talked to her.” [1]

“Very nice,” Carrier said. “Kind. You know, ‘Hi Bishop.’ Knew who I was after the first couple of times. ‘I’m doing OK. I’m doing fine.’ Very much into the scene of whatever it was.

“So this wasn’t some fictitious thing that was going on. I think some people are saying, ‘Well, how could he not know this was a hoax or whatever?’ He had no idea. He really didn’t.” [1]

For months, Carrier had been trying to arrange a meeting with Te’o, who he noticed was not a regular church-goer. “I would say the first two or three years that he was here, he probably wasn’t doing everything he should have been doing,” Carrier said. [1] “He finally agreed to that about that first week in May last year, and it was more because Lennay had been in this car accident and he was concerned. And we talked about a lot of different stuff about ‘Hey, now are you living your life like you should be? Are you being the person you should be?” [1] “I said Manti, ‘You are man of steel. I need to make you a man of God.’ He’s like, ‘You’re right, Bishop. I need to work on that.’ That started our relationship of interacting, of working, of making sure he was doing what he should be doing.” [1]

According to Carrier, the fact that Te’o became the perfect target for a hoax such as this wasn’t because he is gullible, but rather his head was not where it should have been spiritually. Te’o has since recommitted to lving his life according to LDS principles.

“We teach our kids to be honest, to be trusting, to be caring,” Carrier said. “Manti was having his heartstrings pulled. He’s a great kid and he was just trying to do what was right.

“Prior to when I started talking to him in May, I don’t know how they were — if it was a casual thing — but clearly this tragic accident, being in a coma, this really brought him into a closer relationship. And then he started to talk to her every night. That really started an emotional bond.

“It would not have surprised me if they would have gotten married.” [1]

Carrier and church counselor Mickey Standiford helped Te’o through what Carrier perceived was a very real grief when Kekua allegedly died in September, just hours after Te’o’s maternal grandmother, Annette Santiago, actually did. He was there again when the person portraying Kekua showed up again on the phone, alive, in December.

“He was an 18-year-old kid who came here with the weight of the world on his shoulders to save Notre Dame,” Carrier said. “But he also came to Notre Dame for an education. He got his degree. He worked hard. He did well. We talked quite a bit about ‘Manti, you’re one play away from being nobody.’ ”

Now he may never have anonymity again.

“I think he can move past it himself,” Carrier said. “But I think it will always follow him. Other people will bring it up.

“I hope the good in all this is it will help other people. I’m a 60-year-old guy. This social media stuff I don’t get. This isn’t the way I grew up. I don’t understand this kind of stuff, Twitter and all of this.

“Maybe it’s to help some of these young kids realize you’ve got to be very careful in this social Internet Twittering, Facebook kind of stuff, where anybody can be anything to anyone.” [1]

The lord Jesus Christ in Mormonism