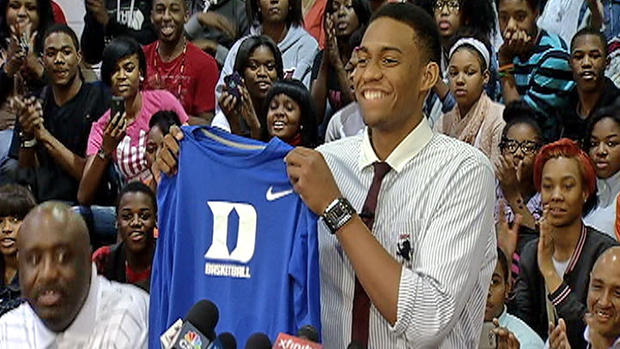 Jabari Parker, Simeon Career Academy’s (Chicago) small forward and the No. 2 player in the ESPN 100, has announced that he will be playing basketball for Duke University under coach Mike Krzyzewski. Perhaps some people thought that since Jabari is a member of The Church of Jesus Christ of Latter-day Saints (more commonly referred to as the Mormon Church), he would have chosen to play at Brigham Young University (BYU). Others may have thought that he would choose to serve a two-year mission for the Church of Jesus Christ prior to making his decision, especially in light of the announcement of the lowering of age requirements for males wishing to serve a full-time mission that was made by President Thomas S. Monson during the October General Conference. However, neither proved to be the choice that Jabari would make.

Jabari has chosen to commit to playing for the Blue Devils at Duke University over other schools such as Michigan State, Florida, Stanford, and BYU. His decision, however, was not received well by some of his fans and even resulted in some harassment on Twitter. ESPNChicago.com’s Scott Powers wrote that much of the reaction in social media to Jabari’s decision was negative, and that the abuse Parker suffered in the aftermath wore on him:

“I think I’m getting more tweets,” Parker told Chicago radio station ESPN 1000. “Fans are just now giving me a hard time. They sometimes just forget I’m a kid. Real hateful stuff. It’s no problem, though. I know it comes with the territory, and it’s just going to make me stronger.” [1]

Jabari, who had 34,175 Twitter followers as of Friday morning, 21 December 2012, responded with his own tweet which said:

“Trying to grow up fast. Act with a lot of class. I want to be respectful ALL the time. Sometimes people forget I’m 17#strivingforcharacter.” [2]

Following the interview and subsequent publishing of the ESPNChicago.com article, fans began logging on once again to show an outpouring of support of Parker and his decision to play at Duke.

Jabari’s decision after all is his decision, and whether or not some of his fans agree with his decision should have no effect on that decision. As one fan tweeted, “I don’t understand how people can be upset that @JabariParker22 decided to go Duke. It’s his life.” [1]