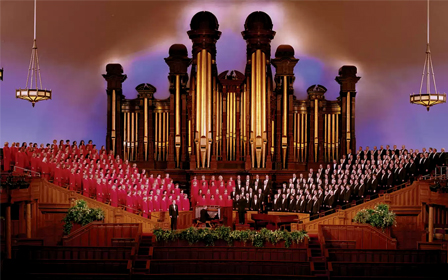 The Mormon Tabernacle Choir has announced its guests for the 2012 Christmas Concert. Tom Brokaw will provide the narration and Alfie Bow will be the featured soloist. This concert is held each year, three times. Tickets to the dress rehearsal and to the performances are free, but tickets are required and are in high demand. For this reason, they are distributed through a random process and those wishing to attend must register for the possibility of being chosen.

Tom Brokaw has performed with the Mormon Tabernacle Choir in the past. He narrated the choir special held in remembrance of the 2001 World Trade Center attacks. He also performed at the 2002 Olympics in Salt Lake City, Utah. He is a noted journalist for NBC. He began his career with their Los Angeles station, and then became their White House correspondent. He then became the anchor and managing editor for NBC Nightly News With Tom Brokaw.

Alfie Bow played Jean Valjean in the Les Misérables concerts that were broadcast from London’s O2 Arena on PBS. He is a British tenor with illustrious opera training. He won a Tony for his performance in La Bohème on Broadway in the United States and toured the US this year.

The Mormon Tabernacle Choir was formed in the mid-19th century and is one of the oldest choirs in the United States. Ronald Reagan dubbed it “America’s Choir.” This all-volunteer choir hosts a weekly broadcast which began in 1929 and is now on television. The program, Music and the Spoken Word, offers religious music and an inspirational message each Sunday morning. The choir has earned two platinum recordings, five gold recordings, one Emmy, and one Grammy award. They’ve sung for ten presidents of the United States and they sang at the funerals of Franklin D. Roosevelt and John F. Kennedy.

The Choir is named for the Tabernacle on Temple Square in Salt Lake City, Utah. The choir performed there from their creation and the number of people in the choir is based on the number of choir seats that were built into the building. The Tabernacle has legendary acoustics and has been designated both a historical landmark and a national civil engineering landmark. There is a legend that Brigham Young came up with the unique shape of the building while staring at an eggshell cracked lengthwise.

Mormon is a nickname for members of The Church of Jesus Christ of Latter-day Saints. All members of the choir are Mormon and must have a recommendation from their ecclesiastical leader saying they are members in good standing.