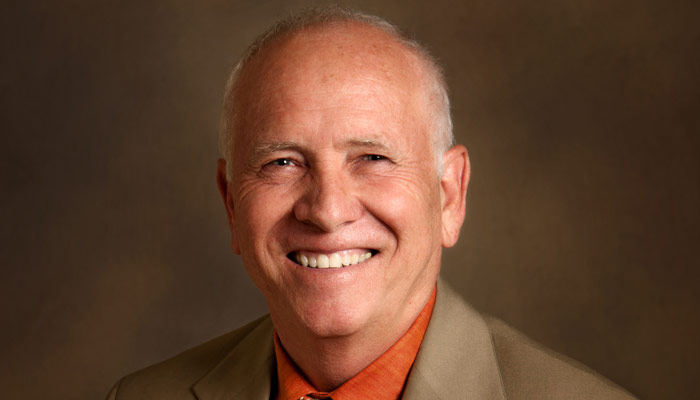 James C. Christensen (1942-2017) was a famous painter, art teacher, illustrator and father. He was also a member of The Church of Jesus Christ of Latter-day Saints.

His paintings are based on myths, fables, and fantasies. He also included subjects such as Catholic saints, scriptural stories, and science fantasy. His artwork is best known for its fantasy qualities: flying boats, flying pigs, and “floating fish, often on a leash.” [3]

James’ work commonly has Christian meaning and contains discernible LDS themes, such as: “where humans are eternal beings, often striving to better themselves; where the everyman struggles to shine his light in a dark world; and where characters show courage and faith in the midst of adversity.”[4] Christensen’s art combines dreams, hopes, fears, and humor into the fabric of everyday life.

“My aim always begins with a desire to connect with another imagination,” said Christensen. “My work is an invitation to let your imagination run wild, explore, and make interpretations spontaneously.”[3] 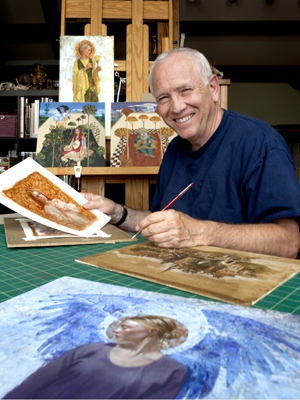 James C. Christensen grew up in California, but he eventually settled with his wife in Orem, Utah. As his artwork suggests, he also spent a great deal of time living abroad. He served as an LDS missionary in Uruguay, where he spent two years teaching others about the Gospel in Spanish. He later spent time accompanying his students as they traveled throughout Mexico and Europe. He and his wife lived for a couple of years in Spain.[3]

Art was always an important part of his family’s life. He designed his family home “filled with secret passages and sculptures inspired by his paintings.” [3] He and his wife Carole raised five children, and three of his daughters followed his footsteps and became artists. [4] He and his wife were co-chairs of the Mormon Arts Foundation. [3]

James C. Christensen finished a Master’s degree at Brigham Young University. Though he dreamed of teaching art at BYU, he ending up moving to California and working as a junior high art teacher. He said of that experience: “It was not part of our plan, but it turned out that’s where we matured spiritually and learned how to be strong, active members of the Church. I was in the bishopric before I was 30, and Carole was also in many leadership positions.” [4]

James still dreamed of teaching at BYU, and for years he persistently applied and reapplied. In the meantime, he moved to Utah to work as a designer and illustrator at The New Era (a magazine for Mormon youth).

After eight years of rejection, he eventually decided to stop praying for the BYU teaching opportunity. He chose to simply accept God’s timing, a decision which led to learning for himself that God always answers His children’s prayers.

I got to the point where I didn’t pray about teaching at BYU anymore. I decided Heavenly Father already knew what I wanted… It turned out that God was listening… He prepared a way for me to get in, just not the way I thought. I got a confirmation that God was taking care of me, but it was on his time.

Within three months, James was invited to teach design and illustration at BYU. His previous job designing and illustrating for the LDS Church magazines prepared him for and led him to a teaching career at BYU for 21 years. [4] James also had the opportunity to create murals for the walls of both the Nauvoo and the Provo City Center LDS temples.

In 1990, he received the Association of Science-Fiction and Fantasy Artists’ Chesley Award for “The Fish Walker.” The World Science-Fiction Convention awarded him in 1991 a “Best in Show” for “Once Upon a Time,” and then in 1992 a “Judges’ Award” for “The Royal Processional.”

“Fish in a Toucan Mask” via: artifactsgallery.com 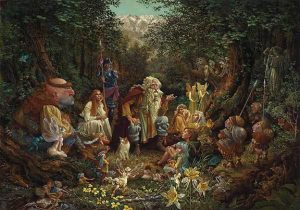 “Once Upon a Time” via: artifactsgallery.com