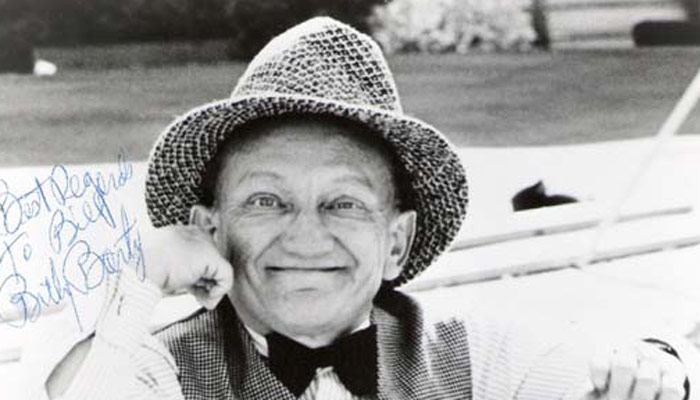 Billy appeared in over 200 films in the 70 years of his career including vaudeville, television, commercials, stage roles and nightclub appearances. He is perhaps the most recognizable of all little people. He was 3-feet, 9-inches tall. He worked very hard to raise public awareness of the problems of people with dwarfism. He was awarded a star on the Hollywood Walk of Fame in July 1981. (1924-2000)

Born William John Bertanzetti, Billy Barty, the 3-foot-10-inch veteran actor whose career spanned seven decades, appeared in his first Hollywood feature in 1927 at the age of 3 and has performed for radio, television and on Broadway. As an actor, he has appeared in over two hundred films and hundreds of television shows.

As an entertainer, starting with vaudeville, he has appeared on stage all over the world in theaters, nightclubs, Broadway, the London Palladium, and USO shows. He founded the Little People of America in 1957 and the Billy Barty Foundation in 1975.

Billy played a number of outrageous characters in his career, including a wizard in the movie Willow (1988), a tongue-in-cheek stint as a German spy in Under the Rainbow (1981), and a suspected stalker in Foul Play(1978) with Chevy Chase and Goldie Hawn. He also had TV appearances in the 1970s on Punch and Jody and on Sid and Marty Kroft’s Sigmund and the Sea Monsters. He even had his own program,Billy’s Big Show.

Shirley Bolingbroke was a friend of Billy’s who came from an LDS family in Malad, Idaho. She invited Billy to meet with the missionaries. The two later became a couple, and on February 24, 1962, they were married by Shirley’s uncle in the Relief Society room of the Studio City Ward in California.

At Famous Mormons we have received many e-mails from Church members explaining what a great man Billy Barty was.