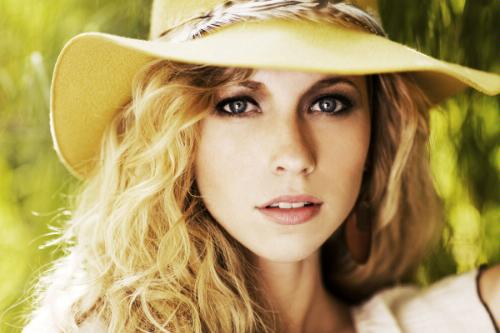 Brooke Elizabeth White, a member of The Church of Jesus Christ of Latter-day Saints (often mistakenly referred to as the “Mormon Church”), is an American indie pop/folk-pop singer-songwriter and actress. She was born 2 June 1983) in Phoenix, Arizona, and raised in nearby Mesa, Arizona. She is the daughter of Brad and Kaylene White and has three younger siblings – Katie, Tyler, and Quinn. She is of English descent and has family members in Nova Scotia, Canada.

Brooke finished in fifth place on season seven of American Idol. In 2005, she released her debut album, Songs from the Attic, and in 2009, her first post-Idol album, High Hopes and Heartbreak was released. Brooke is also one half of the music duo Jack and White.

Brooke started singing at 16, when she tried out for the high school musical, Meet Me in St. Louis, and earned the lead role. In 2001, she graduated from Heritage Academy. She shared on American Idol that she started doing hair when she was 11 years old. She even attended beauty school at one time, but now describes herself as a “beauty school dropout.”

When she was nineteen years old, she moved to Los Angeles, California, where she attended the Musicians Institute for three months. She then spent the next four years, under the guidance of Tim Simms, recording in the studio and performing in the clubs of Hollywood, California. She also spent a year as a nanny for twin baby girls.

Brooke sang “Like a Star” when she auditioned for American Idol in Philadelphia and received positive reviews from all the judges. During her audition, she admitted to never having seen an R-rated movie. Simon Cowell quipped that he could “bring her over to the dark side.” During Hollywood Week, she accompanied herself on the piano and sang “Beautiful” by Carole King. Following her performance, the judges commented that she reminded them of a young Carly Simon or Carole King. When Simon Cowell appeared on The Oprah Winfrey Show on 17 March 2008, he chose Brooke as one of his four favorites in the competition.

Brooke was in the bottom three, three times, once on 2 April after performing Dolly Parton’s song “Jolene,” again on 16 April after performing Mariah Carey’s “Hero,” and when she was eliminated on 30 April 2008 after performing “I’m a Believer” and “I Am… I Said.” During her elimination video on American Idol, she commented, “It’s probably not a secret that I struggled with my own confidence but I’m stronger than I thought I was and that’s a great thing to get out of this.”

Brooke was on the Fall 2008 cover of Eliza magazine. The cover was accompanied by an eight-page fashion story and article. On 27 September 2008 (proclaimed by the mayor of Mesa to be “Brooke White Day”), she visited her hometown of Mesa, Arizona, and signed autographs at Milano Music Center and performed at the Mesa Amphitheater.

In addition to working on her own music, she also took time to collaborate with her friend Michael Johns for a song called “Life is Okay,” which is off the soundtrack of the Shaun White documentary Don’t Look Down. She appeared in a solo concert in Washington D.C. on 10 October 2009. On 10 November 2009, Brooke released an exclusive holiday EP on iTunes, which included the songs “Away in a Manger,” “Blue Christmas,” and “California Christmas.” On 6 November 2012, she released her debut Christmas album, White Christmas.

In 2011, Brooke teamed up with singer-songwriter Jack Matranga to form a duo called Jack and White. The duo released their debut EP, Gemini, on 22 August 2011. They released their second EP, Winter, on 24 January 2012. The music video for their song “XYZ” premiered on CMT.com on 8 May 2012. On 5 March 2012, the duo announced on Twitter that their next EP would consist of cover songs including their version of the Mamas & the Papas classic “California Dreamin’.” That EP, entitled Undercover, was released on 29 May 2012. After a three-year hiatus, on 13 November 2015, Jack and White released their first full-length album, Lost.

On 8 January 2011 Brooke made her acting debut by starring in a Fox TV movie titled Change of Plans. She wrote and performed three songs for the movie, “Something Beautiful.” “Let Us Live as One,” and “Love Lovin’ You.” She next starred in the Hallmark Channel movie, Banner 4th of July, which aired on 29 June 2013.