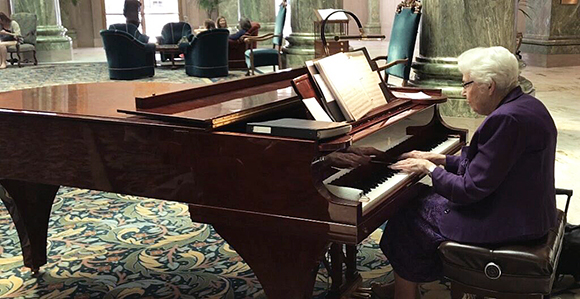 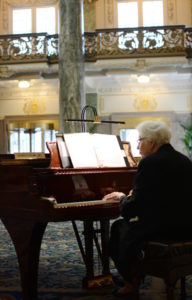 Norma Dee Ryan is a member of The Church of Jesus Christ of Latter-day Saints (often referred to as “the Mormon Church). She was born on 7 September 1930, in Blanding, Utah, to a family who loved music. Her father played the saxophone for a dance band.

At age 7, her family moved to Quince Street in Salt Lake City — about six blocks away from the Hotel Utah, which is now the Joseph Smith Memorial Building. Her family could not afford much but her father set aside a dollar each week to send Norma to the McCune School of Music and Art to take piano lessons.She remembers practicing every day for an hour. She recalls her parents telling her when they gave her the money for the piano lessons, “Whatever talent you develop, you’re to use it for the Church,” which she says she has always done.”

At age 10, she recalls playing for her Primary in the 19th Ward of the Salt Lake Stake when the regular pianist didn’t show up. She grew up playing for various Church meetings and later served as ward organist several times. 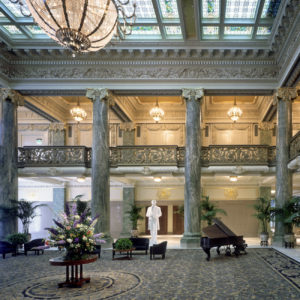 While playing the piano in the lobby of the Joseph Smith Memorial Building in Salt Lake City, Utah, during the April 2018 general conference, an Italian couple stopped to listen to Norma Dee Ryan play. When the gentlemen inquired how old she was, she replied, “There are 88 keys on the piano and I’ll be 88 in September.”

She was surprised to run into the couple a week later in the Nauvoo Cafe at the Joseph Smith Memorial Building, thinking that they had already returned home to Italy. The gentlemen greeted her by saying, “Sister 88 Keys, we’re here to hear you play the piano. And we’re going to stay for the whole hour.” She recounted the experience to her children who now lovingly refer to her as “Sister 88 Keys.”

Herbert Klopfer, the lobby music coordinator, commented, “She is a jewel. She is by far the best pianist I’ve ever had. I will miss her immediately, and so will all the others.” He continued, stating that Norma is known for playing the “old-time tunes” that people remember by heart. He said, “She must have 1,000 or more tunes in her mind.” 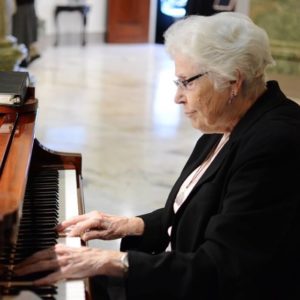 One of Norma’s fondest memories of her time playing the piano at the Joseph Smith Memorial Building is the people from many different parts of the world who walked by and talked to her while she was playing. She said, “It’s been a wonderful experience … So many coincidences happen. For example, someone will stop and say ‘Oh, that’s my dad’s favorite song and we just had his funeral last week,’ or, ‘That’s a song we played at our wedding reception.’” Norma also recalls  playing “Roses of Picardy,” a well-known piece from the time of WWI, when a woman stopped and said, “I’m from Picardy!” (Picardy is a city in France).

Norma also remembers meeting a man from Nevada and asking him if he knew her uncle Nate Hurst. The man replied that Nate Hurst was the first Latter-day Saint that he ever met. That sparked a conversation about how he became a member of the Church.

Norma Dee Ryan has lived all over the United States with her family and has performed at restaurants, dancing schools, roadshows, variety programs, and funerals. She also played the piano professionally for Nordstrom department stores in the Northwest. In 1995, she returned to Salt Lake City, Utah. The following year, she began playing one day a week at the Joseph Smith Memorial Building. She said that she missed very few times of not being there.