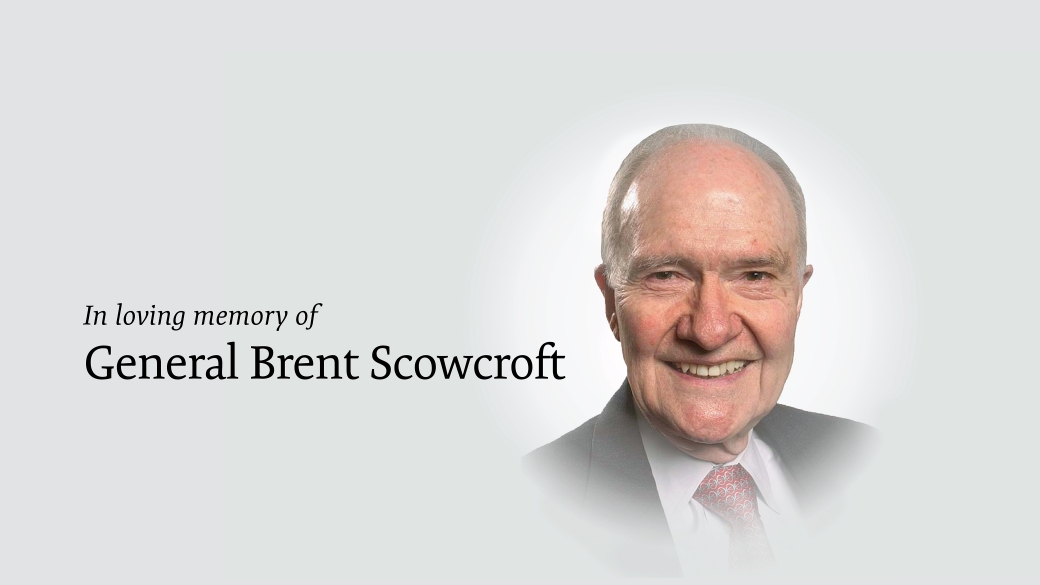 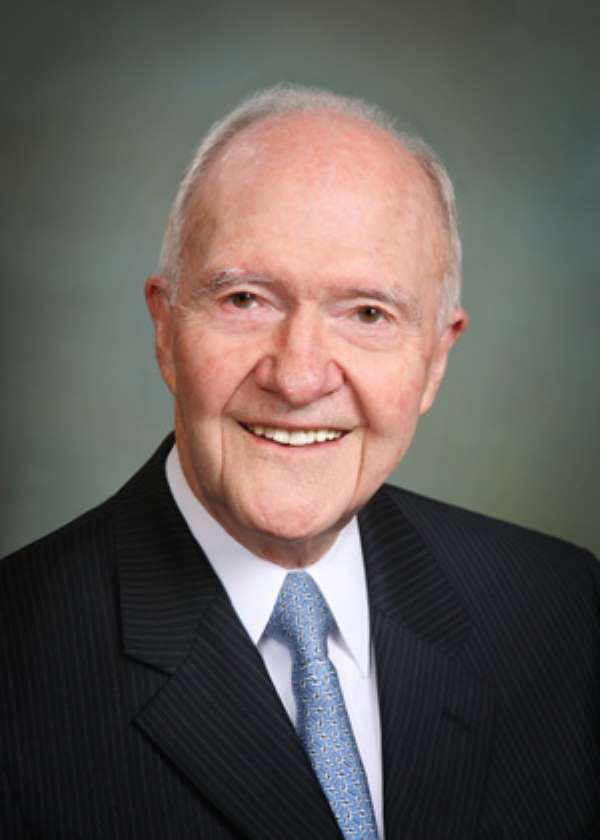 Scowcroft was 95, and according to Jim McGrath, a spokesperson for the late President Bush, he died of natural causes at his home in Falls Church, Virginia. He was a member of The Church of Jesus Christ of Latter-day Saints (often referred to as “the Mormon Church”).

He is credited as co-author of former President George H.W. Bush’s memoir, which is a book about the Cold War titled A World Transformed, which was published in 1998. In 2008, he co-authored the book America and the World: Conversations on the Future of American Foreign Policy with former President Carter’s national security advisor Zbigniew Brzezinski.

Brent Scowcroft was born on 19 March 1925, in Ogden, Utah. He was the son of James Scowcroft, who owned a wholesale grocery business, and his wife, Lucille (nee Ballantyne). In 1947, he graduated from the U.S. Military Academy at West Point and then joined the Army Air Corps, which soon became the Air Force. A few months after completing pilot training, he broke his back in the crash of an F-51, which put him in the hospital for two years. 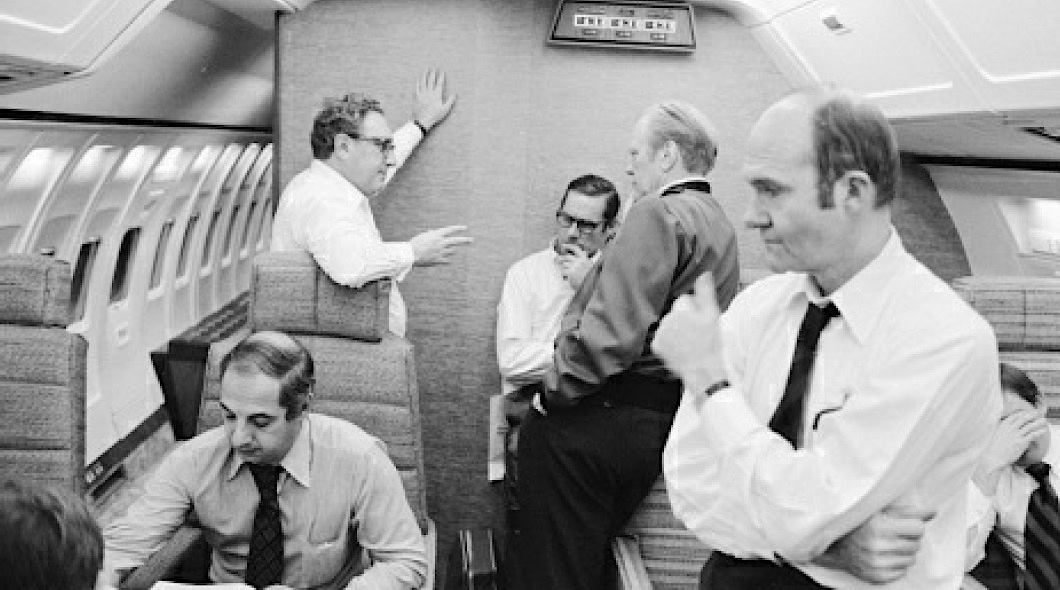 He refocused his military career on strategy and planning. In 1953, he earned a master’s degree at Columbia University and went on to teach Russian history at West Point. In 1957, he began studying at the Strategic Intelligence School in Washington, D.C. Two years later, he was an assistant air attaché in the American Embassy in Belgrade, Yugoslavia. He then taught political science at the U.S. Air Force Academy in Colorado.

During the 1960s, he was assigned to Air Force headquarters and the Defense Department. He earned a doctorate in international relations from Columbia University in 1967. 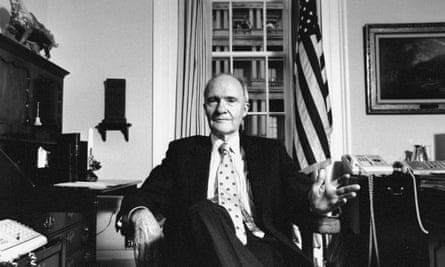 Scowcroft entered the highest levels of government when he served as military assistant to Richard Nixon in 1972, at the time of the president’s visits to China and the Soviet Union. Nixon’s national security advisor, Henry Kissinger, chose Scowcroft as his deputy when Alexander Haig went on to a senior army post at the start of the following year.

From September 1973, Kissinger was also serving as secretary of the state, so Scowcroft took over much of the running of the national security council. He regularly conducted the president’s daily intelligence briefing. In the turmoil of the Watergate crisis and Ford’s succession to the presidency, he became the obvious successor to Kissinger when he stepped down from the security side of his post in 1975. 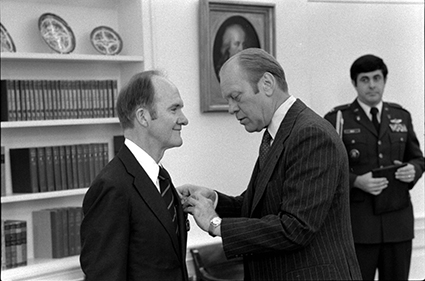 In 1975, upon his retirement from the United States Air Force with the rank of lieutenant general, Scowcroft was appointed to the position of national security advisor by former President Gerald Ford. Under the Ford Administration, he organized the United States’ evacuation from Saigon – the event that marked the end of the Vietnam war.

He served on Carter’s advisory committee on arms control and was chairman of President Ronald Reagan’s Commission on Strategic Forces, which focused on the effort to modernize U.S. nuclear weapons. He also served on the three-member Tower Commission, which investigated the Iran-Contra scandal (arms-for-hostages) affair that occurred during Reagan’s administration. 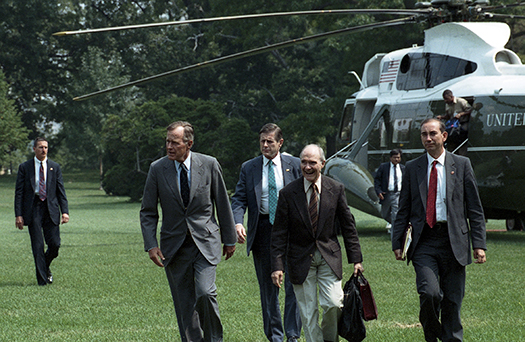 Fourteen years after serving in the Ford administration, Scowcroft was recalled to the same job during the four years of the George H.W. Bush administration from 1989 to 1993. He and former President Bush had been close friends since serving together in the Nixon administration. The Guardian reports, “During that stint he was caught on the hop by the fall of the Berlin Wall, by the implosion of the Soviet Union, and by Saddam Hussein’s attack on Kuwait.” Scowcroft effectively superseded James Baker, the secretary of state, as manager of U.S. foreign policy during this crucial period of modern history. After Bush lost his reelection bid to Democrat Bill Clinton in 1992, Scowcroft returned to consulting. 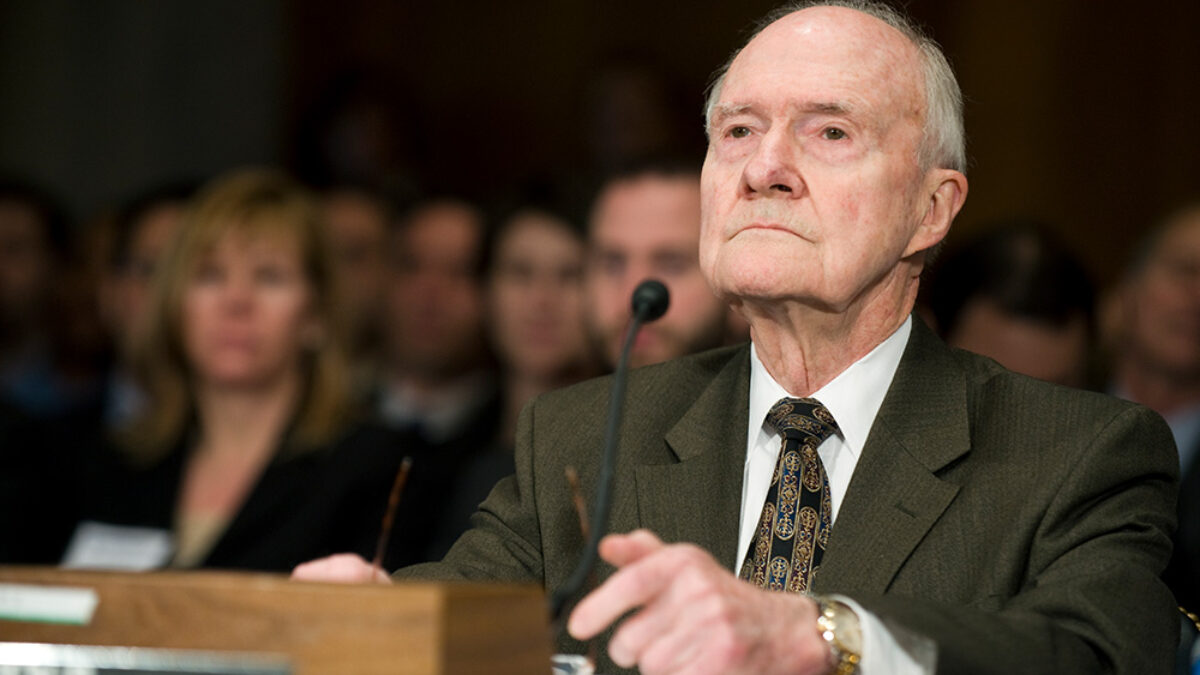 Historian David F. Schmitz, who holds the Robert Allen Skotheim Chair of History at Whitman College, and specializes in 20th Century United States history, especially United States Foreign Policy, did a study of Scowcroft’s career. He noted that Scowcroft had been at the center of numerous post-Vietnam War discussions of American foreign policy. He was part of the presidential administrations that grappled with U.S. responses to the collapse of communism in Europe, the crackdown in China after the Tiananmen Square protests, and Saddam Hussein’s invasion of Kuwait and the subsequent Gulf War.

Schmitz wrote, “The key tenets of his [Brent Scowcroft] thinking, shaped by the Second World War, were that national security policy had to protect the nation from aggression, provide international stability, control arms while maintaining preparedness, and shape an international environment that was conducive to America’s goals and needs.”

The Guardian further reports that Scowcroft’s most enduring legacy will probably be the United States’ signing of the Salt II nuclear arms limitation treaty with Boris Yeltsin in 1993 and his accumulated moves to reduce nuclear instability.

Brent Scowcroft married Marian Horner in 1951. She died in 1995. He is survived by a daughter, Karen, and a granddaughter, Meghan.