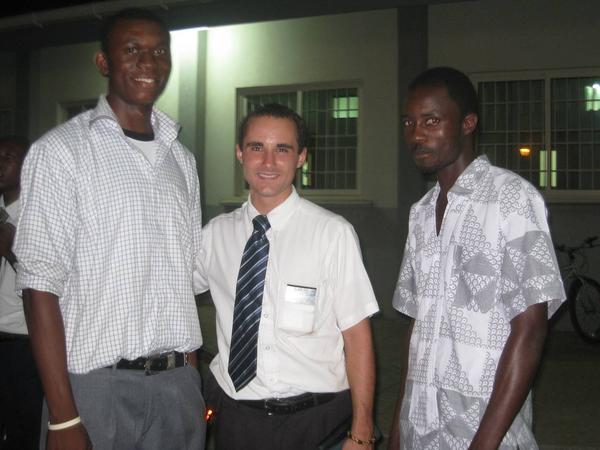 Ezekiel Nana Ansah, perhaps better known to many as “Ziggy”, is a recent graduate of Brigham Young University (BYU) in Provo, Utah, where he played the position of defensive end for the BYU Cougars. He graduated with a degree in Actuarial Science and a minor in Business.

During the 2013 National Football League (NFL) Draft he was selected by the Detroit Lions in the first round (5th overall.) 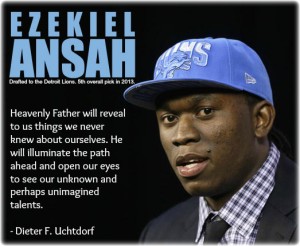 Ansah was born in Ghana, West Africa, on 29 May 1989. He has always had a keen interest in sports. As a youth he played what Americans refer to as soccer, but what he would have referred to as fútbol. Although fútbol and football may sound somewhat alike, he never saw an American football game growing up. In addition to playing soccer, he was also an avid basketball fan and regularly played pickup basketball games at his local school.

In 2004, he joined the Presbyterian Boys’ Secondary School (more commonly referred to as PRESEC) Legon, a prestigious all-male academic institution founded in 1938 by the Presbyterian Church of Ghana. While at school Ansah studied Business. He was also an active participant in sports. He played on the basketball team, and also participated in other field and track sports. He graduated from High School in Ghana in June 2007.

Ansah’s Conversion to the Gospel of Jesus Christ

Ezekiel Nana Ansah is a convert to The Church of Jesus Christ of Latter-day Saints (inadvertently referred to as the Mormon Church by the media and others.) He has an amazing conversion story which is retold in an article in Meridian Magazine by one of the missionaries who served in Ghana and was instrumental in introducing Ansah to the restored gospel of Jesus Christ.

Elder Frei first met Ansah when after 18 months of his mission were complete, he was transferred to Adenta, Ghana a suburb of the capital city, Accra, Ghana to complete his mission. Ansah was working at the Elementary school where The Church of Jesus Christ held its weekly sacrament meetings. After that first meeting on 6 December 2007, Elder Frei recorded the following entry in his journal:

This evening we taught a guy named Ezekiel. Ezekiel works at Sunbeam School where we meet for church. He is a really tall kid, about 6’6”. At first he told us that he was too tired to meet with us, but I asked him if we could just take 5 minutes with him and he agreed. He has been taught a time or two before by missionaries but has been reluctant to join the Church. Marian Opare told me it was because his family and friends were against the Church. I think I will try to just be his friend and not pressure him. In our “5 minute” lesson we just allowed him to ask us questions and he did for over an hour. Elder Thatcher bore a very powerful testimony at the end, and I think it really touched Ezekiel’s heart. It was great. [1] 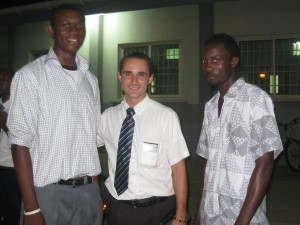 friends that had urged him to beware of the Mormons. In spite of his hesitation at the start, Elder Frei stated that he could tell that Ansah was a special person and that he had a deep abiding desire to learn the things that the missionaries could teach him. He further stated that he and Ansah soon became the best of friends. Elder Frei attributes that friendship to Ansah trusting him and realizing that he genuinely cared about him. That in turn allowed him to feel more at ease in asking the questions that he had about the Church. Once that relationship was established, he and his companion began teaching Ansah several times a week.

On 12 December 2007, Elder Frei recorded the following entry in his journal after meeting with Ansah:

…This afternoon we went to visit Ezekiel. Ezekiel is doing great, I think. He has been receiving pressure from friends to stay away from the Church but has come in spite of that. We read from the Book of Mormon with him and it went great. As we chatted with him after the lesson he really opened up to us, and I think he will get baptized. [1]

And on 14 December 2007, Elder Frei recorded this journal entry:

In the evening we went and taught Ezekiel. It was awesome. We talked about the gospel of Jesus Christ and about baptism. We challenged him to pray about baptism. He asked a few questions about being baptized again, but I knew that he already knew the answer so I told him to answer his own question. He said that he knew he needed to do it. In his prayer and the end of the lesson, he told the Lord that he wanted to join the Church and asked God to confirm that it was right. It was a huge blessing! [1]

Elder Frei and his companion, Elder Thatcher, knew in their hearts that Ansah was diligently seeking for answers, and that he wanted to become a member of The Church of Jesus Christ, but they also realized that at the same time there was incessant opposition from family and friends to stay away from the LDS Church. As Ansah earnestly prayed for answers, Elder Frei and Elder Thatcher also fasted and prayed seeking guidance from the Lord as to how to best help Ansah, and also that Ansah would be given the strength to make the right decisions regarding the Church, but most importantly that those decisions would be the decisions that Heavenly Father wanted him to make. They decided to challenge Ansah to be baptized and to set a firm date. 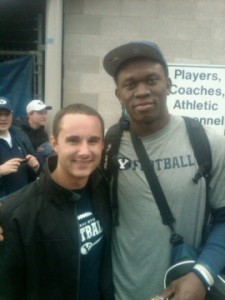 In Spite of the Opposition, Ansah Makes the Right Decision

The Lord answered the petitions of Elder Frei and Elder Thatcher, as well as the petitions of Ansah.  On 19 December 2007 they met with Ansah to challenge him to be baptized. This is the entry in Elder Frei’s journal after that meeting:

This evening we went to Sunbeam School to teach Ezekiel. We had planned to challenge him to be baptized. He beat us to the punch. We asked if he had prayed about it and he said that he thinks that he has waited too long and that he wants to be baptized as soon as possible. We are so excited. Ezekiel will be a fantastic member. I have no doubt he will be a leader. [1]

Elder Frei further recounted that Ansah “really radiated the light of Christ and you could tell that he had a testimony of Jesus Christ.” [1] Ansah asked Elder Frei to baptize him. He was baptized at the age of 18 years on 12 January 2008 in Madina, Ghana, a town in the Ga East Municipal district, a district in the Greater Accra Region of southeastern Ghana. On that momentous day Elder Frei recorded the following journal entry:

Today was a sweet day. We got up early to go to Madina for Ezekiel’s baptism. He has really faced a lot of persecution for joining the Church. He has a testimony though and will be a fantastic leader in the future. He was able to bring his mother to the baptism which was great, because she has heard some funny rumors about the Church and we were able to answer questions for her and help her feel more comfortable…. Ezekiel asked me to perform the baptism, and I was honored to do so… He is 6’6”, so he is much bigger than me. It was hard to get him under the water. I thought we had him the first time but his knee just came out. The second time he kind of flung himself back and I wasn’t ready for how fast he fell. He almost pulled me under. I managed to hang on, but we both lost our balance and stumbled trying to stand up. He was immersed though and baptized by proper Priesthood authority. He was very happy but said that his back was sore from bending back so far for the baptism. We both had a good laugh about that. After changing clothes, we went back to the service. Ezekiel bore a powerful testimony about the Church to his mother. He is a special kid. After the service, we showed Ezekiel’s mom around the new stake center. She told us that she was very impressed and that the bad things that she has been hearing about the Church were not true. I hope and pray that one day she will also be baptized. It was a special service. [1]

Perhaps it is interesting to note that the school motto of the Presbyterian Boys’ Secondary School, Legon, where Ansah attended in Ghana, is “In Lumine Tuo Videbimus Lumen” (In Thy Light We Shall See Light). Ezekiel Nana Ansah is indeed a living witness and testimony of that school motto as he has embraced the Light – the gospel of Jesus Christ – and has allowed the Light within him to radiate throughout the world. Of other noteworthy interest is that the school anthem is “Happy Are We” written by J.L. Anang. And indeed, Ansah is happy to have finally found the answers that he was looking for through his conversion to the restored gospel of Jesus Christ.